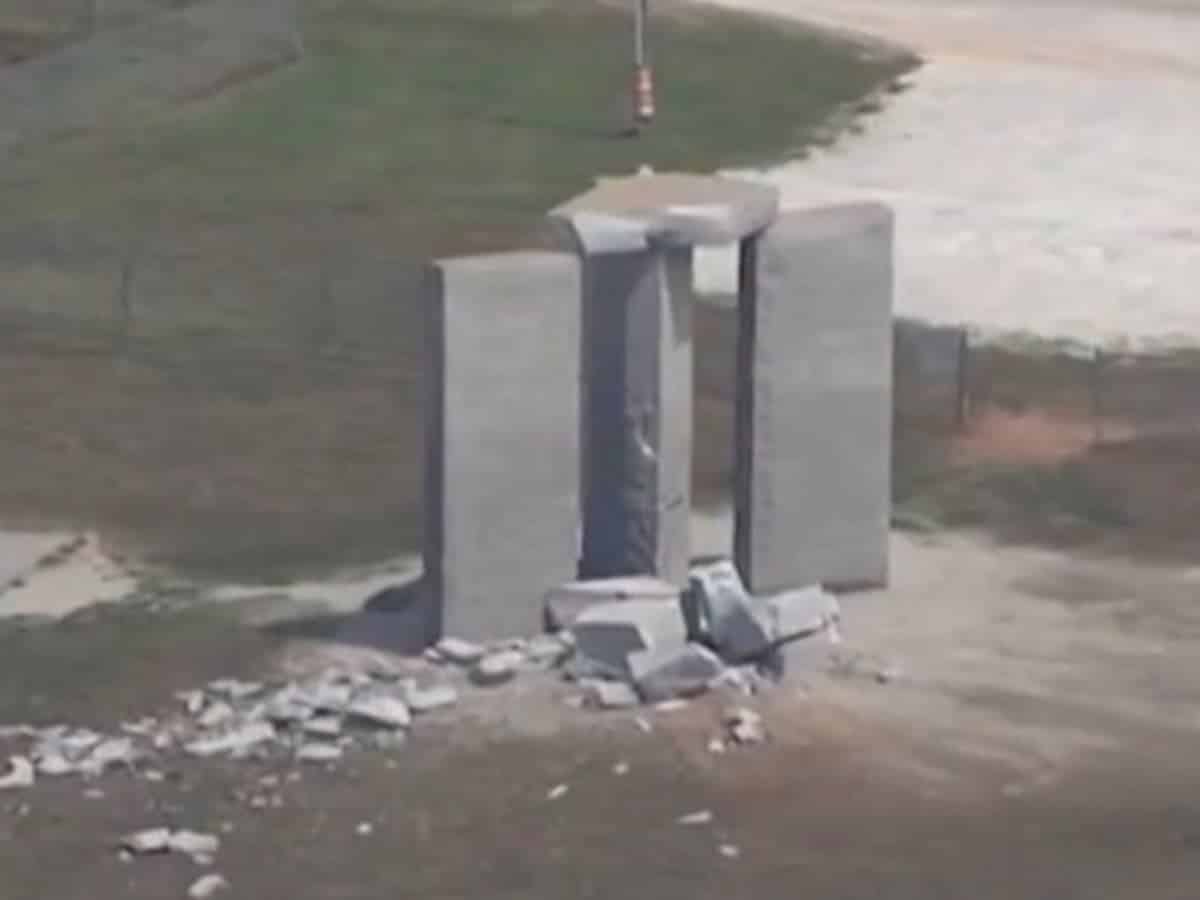 The mysterious Georgia Guidestones have sustained significant damage after residents reported hearing a thunderous explosion near their location.

The Georgia Bureau of Investigations told reporters that preliminary information suggests someone used an explosive device to damage the pillars.

The Elbert County Sheriff’s Office is working with the Georgia Bureau of Investigation to investigate the attack on the structure.

Investigators said unknown people detonated an explosive device at around 4 am. A large portion of the structure was damaged and one part was completely destroyed.

The guidestones — sometimes called America’s Stonehenge, despite being erected in 1980 — consists of six granite slabs, with an inscription carved in eight different languages ​​across the slabs. The inscriptions contain guidelines — hence guidestones — for pursuing human progress.

Later on Wednesday authorities made a decision to level the remainder of the monument.

11Alive’s Dawn White reported from the scene in Elbert County in the evening that crews had gone in to level the remaining standing parts of the Guidestones.

Video from the scene showed construction equipment and the stone blocks in a rubble heap.

Explainer: What are the Georgia Guidestones?

The Georgia Guidestones is a group of stones forming a granite monument in Elbert County, Georgia, about 90 miles east of Atlanta, 45 miles from Athens, and seven miles from the town of Elberton, locally known as “the Granite Capital of the World” .

Learn more about the bizarre history of the landmark:

Graig Graziosi has the latest developments from Georgia:

A focal point of conspiracy theorists

The monument has become the focal point of conservative conspiracy theories over the last years, with allegations that the message on the slabs are instructions for the coming “new world order.”

Kandiss Taylor, a far-right conspiracy theorist who ran in the state’s Republican gubernatorial primary against incumbent Brian Kemp, made the destruction of the guidestones a central pillar of her campaign.

In a glossy campaign video, she announced her “executive order 10,” which would see the monument demolished.

Throughout the video she nods to other conservative talking points and conspiracy theories.

The video starts with a reference to a Covid-19 vaccine conspiracy, with Ms Taylor saying “over four million people got injected with something that took only nine months to create. Ask yourself why.”

It then moves onto demonic human sacrifice.

“Human sacrifice was a form of demonic worship, we’re still doing it in present day by killing our unborn,” she says, while a graphic about the number of abortions performed worldwide splashes across the screen. “It’s the same demons, the same sacrifice, the same sin, it’s just a different time.”

Then she shifts focus to the “new world order” and the insinuation that the Georgia Guidestones are a message from the demon-worshipping elite who secretly rule the world as to their plans.

“The new world order is here and they told us it was coming,” she says.

Shortly after news broke that the stones had been damaged, rather than denouncing the destruction of private property by a protester — which is standard for most Republicans — she suggested that God struck down one of the stones.

In his inimitable style, on his HBO show Last Week TonightJohn Oliver took a look at Kandiss Taylor, the Georgia Guidestones, who may have actually commissioned them, and what their supposed message may actually be…

The Elbert County Chamber of Commerce was saddened to learn of the apparent intentional destruction of our most frequently visited community attraction, the Georgia Guidestones. Over the years, the Guidestones have created lots of discussion and brought visitors to Elbert County from all over the world. Whatever your personal opinion on the Guidestones is, this attack is bad for our community. We hope that whomever is responsible is apprehended and brought to justice.

Given their mysterious origins, the intended meaning or purpose of the Guidestones is somewhat vague.

One interpretation is that they describe the basic concepts required to rebuild a devastated civilization after a nuclear war. This is believed to have been the case given that they were built at the height of the Cold War in 1980.

One inscription reads, “Let these be guidestones to an Age of Reason”, presumably the hope for a post-apocalyptic recovery.

The most controversial engraving for conspiracy theorists is the suggestion to keep humanity’s population below 500 million. Those who believe the intention was for a post-war world say that this is through the assumption that any was would have reduced the world’s population below this already.

Astronomical features mimic the ways in which Stonehenge in the UK lines up with the sun throughout the year, perhaps to ensure time could still be measured after an apocalyptic event.

A time capsule was also intended to be buried at the site, but blank spaces in the inscription appear to indicate it was not.

What we know so far

Graig Graziosi has the latest developments from Georgia:

The Georgia Bureau of Investigation confirms the Georgia Guidestones monument near Elberton was damaged by an explosive device.

GBI says the bomb appears to have gone off around 4 am, with sheriff’s deputies responding to discover the damage. Some residents told local news outlets they heard an explosion at that time.

Elbert County sheriff’s deputies, Elberton police and the Georgia Bureau of Investigation were among the agencies trying to figure out what happened.

The monument had previously been vandalized.

Reporting by The Associated Press