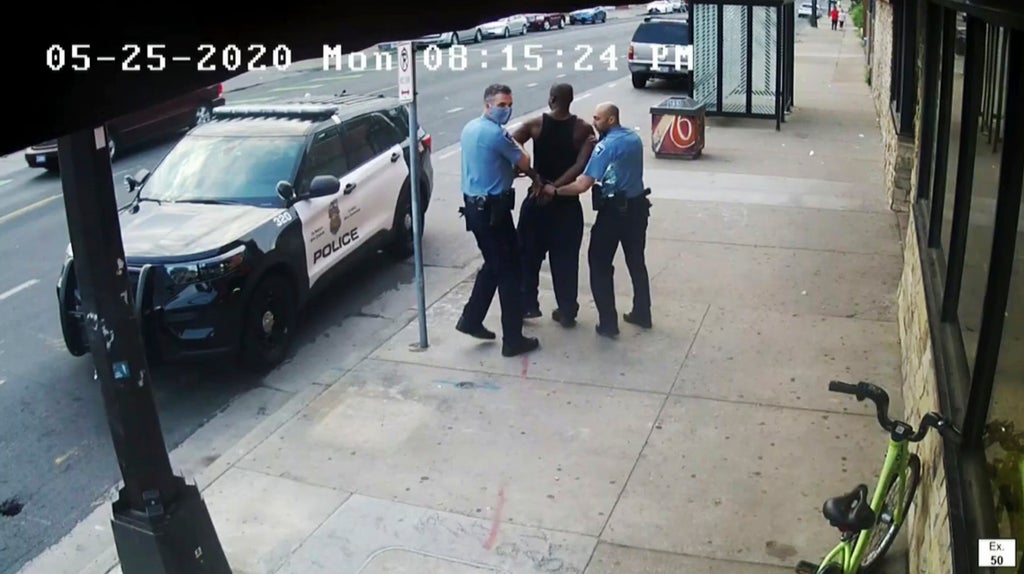 The former officers — Tou Thao, J Alexander Kueng and Thomas Lane — face one count each of failing to provide Mr Floyd with medical aid while Derek Chauvin placed his knee on his neck for more than nine minutes while he was facedown, handcuffed and gasping for air.

Mr Lane – as well as members of the Floyd family – are expected to testify over the course of the trial. On Tuesday, Judge Paul Magnuson barred Mr Floyd’s girlfriend Courteney Ross, who was listed as a witness, from testifying at trial after she gave a press conference on Monday.

Mr Thao and Mr Kueng are also charged with failing to stop Chauvin’s use of force.

The three officers have pleaded not guilty.

Officers called in a Code 4 as their arrest of George Floyd progressed, according to the testimony of Jena Scurry, the 911 dispatcher who sent officers to contact Mr Floyd and witnessed the arrest virtually through a CCT V feed.

Code 4, Ms Scurry explained on Tuesday, means officers regarded the scene as safe. Still, they ended up using deadly force on George Floyd, who died as officers knelt on top of him for 9 minutes.

What happened when a Minneapolis police sergeant was called to review the George Floyd arrest?

Jena Scurry, who is currently on the stand, is a 911 dispatcher who witnessed the George Floyd arrest through a CCTV camera feed.

She was so disturbed by what she saw, a gaggle of officers pressing on top of Mr Floyd, that she called a Minneapolis police sergeant to the scene to review the use of force.

That officer, former sergeant David Pleoger, eventually concluded police could’ve let Mr Floyd up once he stopped resisting. Instead, they stayed on top of him for nearly 9 minutes, including multiple minutes when Mr Floyd appeared lifeless. Here’s what we wrote about Mr Pleoger’s testimony last year.

Up next: Jena Scurry, 911 dispatcher who watched Floyd murder on CCTV

Next to take the stand is Jena Scurry, the 911 dispatcher who first sent officers to arrest George Floyd on a call about a $20 bill counterfeit.

She watched the arrest play out live on a closed-circuit city surveillance camera feed, and she told a jury last year she felt “something is wrong” as she observed police handle Mr Floyd.

Here’s what we wrote about her testimony last March.

Defense attorneys are trying to highlight how officers checked George Floyd’s vital signs multiple times as they knelt on top of him during his arrest in 2020.

“So your testimony that you didn’t see these police officers assist George Floyd at all isn’t based on much is it?” asked Mr Gray as he cross-examined bystander Charles McMillian, who admitted he didn’t see officers take these medical steps.

The three former officers on trial—J Alexander Keung, Thomas Lane, and Tou Thao—are facing federal civil rights charges of failing to give medical aid to George Floyd and failing to intervene in Derek Chauvin’s use of excessive force.

Court is back in session and now bystander Charles McMillian is being cross-examined by defense attorney Earl Gray.

The judge, Paul Magnuson, has warned both sides he is worried about witnesses who will elicit an emotional response, rather that convey information about what happened during George Floyd’s fatal arrest. The judge said he may limit the amount of video played while witnesses are recounting their experiences as a result.

The court has taken a brief recess, following testimony from bystander Charles McMillian, who grew emotional recounting how George Floyd pleaded for his life as Minneapolis police officers knelt on top of him during an arrest in May 2020.

A bystander who watched much of the George Floyd arrest unfold says he grew concerned over officers’ rough tactics—pinning Mr Floyd to the ground with knees on his neck and back—because a friend had recently died in a police squad car.

In video of the May 2020 arrest, Mr McMillian can be heard pleading with officers, “Please let him breathe.”

The judge has asked the jury to disregard Mr McMillian’s comments about his deceased friend.

Charles McMillian, a bystander who witnessed police’s fatal arrest of George Floyd, is telling jurors how he tried to warn Mr Floyd he was in harm’s way if he tried to struggle with officers.

“I’m not trying to win,” Mr Floyd says in response, according to body camera footage.

Charles McMillian, who gave emotional testimony during Derek Chauvin’s trial for murder, is next on the witness stand.

Mr McMillian, among the first witnesses at the scene outside Cup Foods, pleaded with officers to keep him out of the squad car as he tried to de-escalate the scene.

“I’ve had interactions with officers myself,” he said at Chauvin’s trial. “I understand once you get in the cuffs you can’t win. You’re done. That’s just the way I look at it.”

Read the report from The Independent‘s Josh Marcus and Graeme Massie:

Video from the scene of the lethal police encounter between police and George Floyd captured now-former officer Tou Thao pushing away bystanders.

Christopher Martin, who was a clerk at the nearby Cup Foods store, narrated video footage of police officers’ encounter with Mr Floyd as it was presented in the courtroom.