Skip to content
Home News From heckling to Ukraine: The 6 most dramatic moments at Biden’s State of the Union 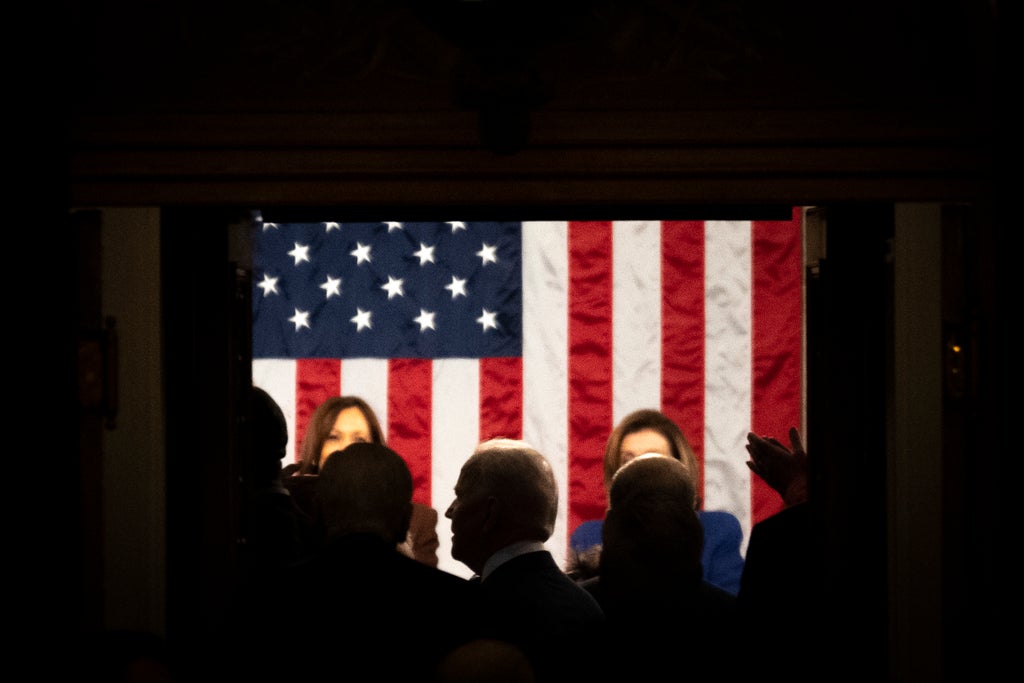 Just over a year into his presidency — and with nine months until the midterm elections — President Joe Biden delivered his first official State of the Union message to Congress.

With the House of Representatives’ mask mandates gone, Mr Biden’s speech was delivered to a packed, albeit socially distant, House chamber, with most of Congress, the Supreme Court, his cabinet, and a First Lady’s box full of guests including Ukrainian Ambassador Oksana Markarova.

State of the Union updates

The president hailed the courage of Ukrainian resistance against Vladimir Putin’s invasion, laid out a strategy to bolster the economy and fight inflation, and called for an end to Covid “lockdowns” and a return to offices for American workers.

Here are some of the top takeaways and moments from his address:

Calling out Vladimir Putin as a ‘dictator’

Moments into his remarks, Mr Biden compared Mr Putin’s actions to aggression demonstrated by other authoritarians in years past while tying his war on Ukraine to the reason for Nato’s creation after the Second World War.

“Throughout our history we’ve learned this lesson: When dictators do not pay a price for their aggression, they cause more chaos. They keep moving, and the costs and threats to America and the world keep rising,” said Mr Biden, who recounted the sanctions the US and allies have levied against Mr Putin and Russia since he ordered the invasion last week.

In an ad-libbed aside, Mr Biden also hinted at more sanctions could be on the way if Mr Putin does not recall his troops: “He has no idea what’s coming”.

Covid is no longer a central focus of his administration

When Mr Biden spoke to a joint session of Congress just before the end of his first 100 days in office, Covid-19 was the first subject he talked about in his remarks.

More than a year later, he returned to the House chamber to call for a return to normalcy and an end to the partisan rancour and culture war battles that have fractured communities across the US.

“We have lost so much to Covid-19. Time with one another. And worst of all, so much loss of life — let’s use this moment to reset,” said Mr Biden, who urged Americans to “stop looking at Covid-19 as a partisan dividing line”.

In particular, Mr Biden called for an end to “the shutdown of schools and businesses” and for Americans to “get back to work and fill our great downtowns again”.

He added: “Our kids need to be in school, and with 75% of adult Americans fully vaccinated and hospitalizations down by 77 per cent, most Americans can remove their masks, return to work, stay in the classroom, and move forward safely. ”

After more than a year of Republicans using resistance to public health measures as a political cudgel to beat up Democrats, Mr Biden sent a clear signal to governors, mayors, and Democratic officials across the country: It’s time to get back to normal before we’ re drummed out of power for years.

Build Back Better is dead — Building a Better America lives

Months after West Virginia Senator Joe Manchin said he would not vote for Mr Biden’s massive Build Back Better social spending package — and after endless bickering and finger-pointing between progressives and the more moderate wing of the Democratic Party — the leader of the party acknowledged that his ambitious plan would not ever be enacted into law.

Not once over the entire course of his speech did Mr Biden utter the words “Build Back Better”.

Instead, Mr Biden laid out a series of goals that can be tacked with standalone pieces of legislation, some of which have already been introduced in Congress.

At the core of the president’s plan was one of the issues that are top of mind for many Americans — inflation.

Mr Biden called “bringing prices under control” his “top priority,” and credited the pandemic and pandemic-related shortages with driving inflation up on his watch.

His solution? Building a Better America.

First and foremost among the plans of his new plan: “Cut the cost of prescription drugs.”

There was a significant push to cut drug prices in his Build Back Better Act by letting Medicare negotiate with drug suppliers, but it was stripped out during negotiations between House and Senate leadership, the White House and Arizona Senator Krysten Sinema.

Another Democratic proposal from Build Back Better Mr Biden revived was a longstanding plan to cap prices of drugs such as insulin.

And another passage of his speech on cutting the cost of childcare could have been given last year when he was pushing Congress to act on his massive plan:

“Middle-class and working families shouldn’t have to pay more than 7% of their income for care of young children,” Mr Biden said. “My plan will cut the cost in half for most families and help parents, including millions of women, who left the workforce during the pandemic because they couldn’t afford child care, to be able to get back to work… it also includes home and long-term care. More affordable housing. And Pre-K for every 3- and 4-year-olds.”

During a 2009 address to a joint session by then-President Barack Obama, then-Vice President Joe Biden looked on as South Carolina congressman Joe Wilson shouted “you lie!” in response to a line in Mr Obama’s speech promising his nascent health care plan would not provide care to people in the country without legal status, drawing outrage from both sides of the aisle for the breach of decorum.

Both women chanted “build the wall” incessantly as Mr Biden discussed the need for the US to “secure our border and fix the immigration system”.

Unlike Mr Obama, he responded, ad-libbing the line: “As you might guess I think we can do both.”

Ms Boebert drew more outrage herself after she heckled Mr Biden once more during a passage of his speech referencing his late son, Delaware Attorney General and Army National Guard Major Beau Biden, and the military burn pits which may have played a role in his developing the brain tumor that killed him in 2015.

Congress — not the White House — will drive the agenda going forward

With Mr Biden’s approval ratings just north of where Donald Trump was at this point in his presidency, members of Congress up for re-election might be looking for ways to distance themselves from him.

But Mr Biden’s new-look agenda isn’t going to force them to get behind administration-crafted legislation that could tar them as rubber stamps in the eyes of voters.

Instead, he called on Congress to pass a number of bills that have been in the works for months — or longer.

Whether it was the “Bipartisan Innovation Act,” the “Paycheck Fairness Act,” the “PRO Act,” the “Equality Act,” the “Violence Against Women Act” or the “Freedom to Vote Act,” Mr Biden made clear that the legislative process — not high-stakes negotiations between the Congress and White House — are what will make the difference in Democrats keeping the House and Senate or losing either or both to Republicans this November.

“We should all agree: The answer is not to Defund the police. The answer is to FUND the police with the resources and training they need to protect our communities,” said Mr Biden towards the end of his speech.

The president has never been a proponent of defunding police departments, but that hasn’t stopped the GOP from taking “defund the police” and similar slogans — often those popular with non-white, progressive — and usually female — members of Congress who can easily be turned into Fox News villains and beating Democrats over the head with them until voters associate the entire party with unpopular ideas.

So he used what could be the last big media event he will participate in before midterm campaigning begins in earnest to call for an end to all things that have been weaponized by the GOP in recent days.

immigration? “We’ve set up joint patrols with Mexico and Guatemala to catch more human traffickers. We’re putting in place dedicated immigration judges so families fleeing persecution and violence can have their cases heard faster. We’re securing commitments and supporting partners in South and Central America to host more refugees and secure their own borders”.

The opioid epidemic? “Increase funding for prevention, treatment, harm reduction, and recovery. Get rid of outdated rules that stop doctors from prescribing treatments. And stop the flow of illicit drugs by working with state and local law enforcement to go after traffickers”.

Americans’ televisions will be clogged with attack ads for the next nine months, many against prominent Democrats using their own words against them.

The most prominent Democrat of all just did his best to make sure they have clips of him to fight back with.