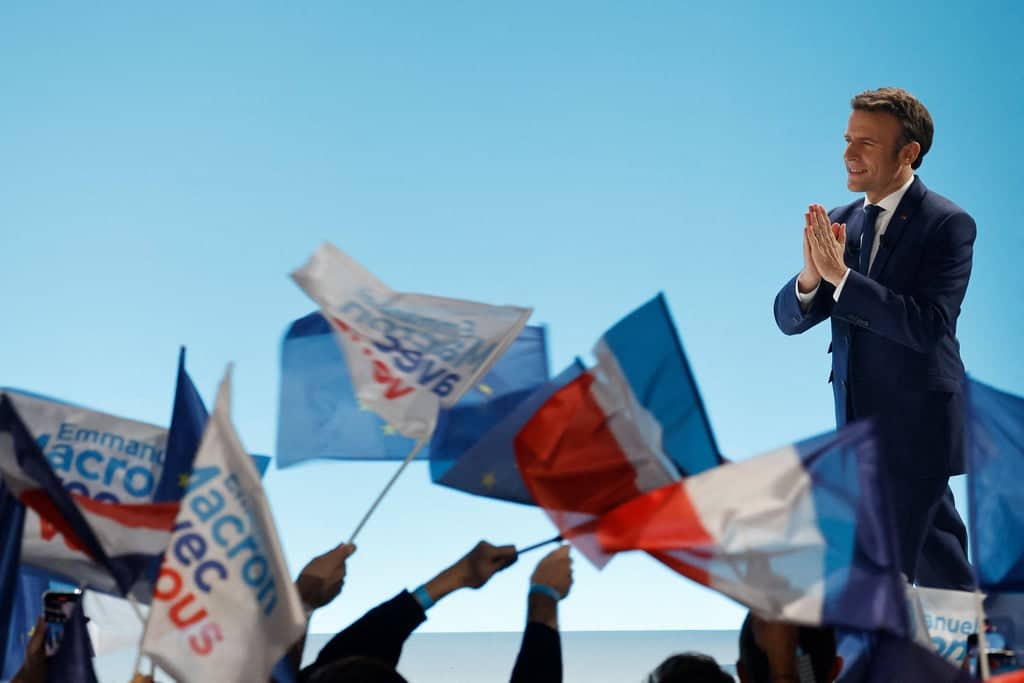 Emmanuel Macron has warned his supporters that “nothing has been decided yet” as the French president faces a runoff battle with far-right opponent Marine Le Pen.

The pair finished in first and second place in Sunday’s first-round vote, and Mr Macron traveled to a poorer area of ​​northern France on Monday which gave its backing to Ms Le Pen and her National Rally party, ahead of two weeks of campaigning.

Opinion polls show Mr Macron is ahead but Ms Le Pen, whose team met on Monday to discuss their strategy for the 24 April second round vote, is not far behind.

Mr Macron said he wants to convince those who voted for “extremes” that “our project responds much more seriously to their fears and to the challenges of the time”.

Ms Le Pen’s campaign wants to focus on the rise of food and energy prices and anger at Mr Macron over policies seen as benefitting the rich.

France’s Emmanuel Macron faces a grueling two-week campaign season and a fight for his political life after coming out on top of the first-round of presidential elections on Monday but facing a hostile, skeptical electorate.

To win against far-right challenger Marine Le Pen on 24 April, Mr Macron must stunt her momentum. But more crucially he must convince angry leftists, Muslims and ethnic minorities who voted for Jean-Luc Melenchon to back him after embracing neoliberal economic policies such as raising the retirement age and flirting with rightwing ideas on immigration and intellectual life.

Read the full analysis from our international correspondent, Borzou Daragahi:

‘Everything is possible,’ says councilor with Le Pen’s party

Aurelien Lopez Liguori, a municipal councilor with Marine Le Pen’s party in the southern city of Sete, said “now everything is possible” after the results were announced.

The Le Pen party heavyweight Louis Aliot told news broadcaster France Info on Monday that the party would strive to “speak directly to the French about their problems” and how Ms Le Pen would lead the country if elected president.

Mr Aliot accused Emmanuel Macron of stirring up millions of French to take to the streets during the yellow vest protests over perceived economic injustice and of having dismantled public hospitals despite the Covid-19 pandemic.

“There are plenty of issues on which he will need to explain himself,” Mr Aliot said.

Senator Francois Patriat, a member of Emmanuel Macron’s party, said the focus was “now on the project and the values”, explaining the strategy consists of being “proud” of what has been done over the past five years, showing “a bit of humility”, and “above all, some fighting spirit”.

Mr Macron will use the next days to “go in the field”, he added.

Prior to Sunday’s first round, Mr Macron was absent from most of the electoral campaign as he spent most of his time focusing on diplomatic efforts over the war in Ukraine.

Marine Le Pen is out campaigning in the Bourgogne-Franche-Comté region southeast of Paris.

The National Rally leader is spending time in the towns of Yonne and Thorigny-sur-Oreuse, Le Monde reported.

Valérie Pécresse, the failed presidential candidate for The Republicans, has asked supporters to donate money to the party, saying her survival is at stake.

She said the party was in debt to the tune of €7 million after only managing to win 4.79 per cent of the vote, below the 5 per cent needed for her campaign to be paid for by taxpayer funds. She tweeted that €5 million of that had been personally invested by her de ella.

“The results mean we will not be reimbursed by the state,” she said.

“I have launched a national appeal for donations. The survival of the Republican right depends on it.”

Emmanuel Macron is campaigning in the northern town of Denain, which once prided itself as the mining and steel capital of France but where in 2019 almost half the population lived in poverty and one in three people of active age were unemployed in 2018.

Marine Le Pen on Sunday won 42 per cent of votes in the town.

Presidential candidates were quick to show their support for Emmanuel Macron after counting concluded in many regions on Sunday.

Anne Hidalgo, the mayor of Paris, endorsed Mr Macron for the next vote “so that France does not fall into hatred of all against all”.

Far-left candidate Jean-Luc Melenchon, who came in third, also called on his supporters not to vote for Marine Le Pen. He said: “There must not be one single vote for Le Pen in the second round.”

Hans Kundnani, director of the Europe program at the Chatham House think tank, said the results showed there had been a “drift to the right in French politics”.

He said: “The results of the first round of the French presidential election confirms two trends in French politics – which also apply across much of the rest of Europe to some extent.

“The first is the realignment of politics around a fault line between centrism and populism. The centre-left Socialist and centre-right Republican candidates both received under 5 percent of the vote – a historic low. The second round will be between Macron and Le Pen as it was five years ago – both of whom see themselves as being ‘beyond left and right’. In other words, they mirror each other. From a democratic point of view, this realignment is disastrous.

“The second trend, which is related to the first, is the drift to the right in French politics. Though the second round will be a repeat of 2017, Le Pen is in a much stronger position this time. Jean-Luc Mélenchon got 22 percent of the vote – which shows that the left is still strong in France, though it has drifted away from the Socialist Party, its traditional vehicle.

“But it is the far right that is now increasingly setting the agenda in French politics – as could be seen by the way that, during the campaign, centre-right candidates like the Republican candidate Valerie Pécresse adopted far-right tropes like the idea of to “great replacement”.

Emmanuel Macron secured more than a third of the vote in Paris, while Marine Le Pen won just 5 per cent in the capital.

However the far-right candidate was more popular in other regions of France.

Ms Le Pen won 33 per cent of the votes in the northern Hauts-de-France region where Mr Macron is campaigning on Monday.

But left-wing candidates were close behind and won a combined 27-28 per cent of the vote in the area.