Free lateral flow tests are set to be scrapped in England from next month under the Government’s plan to learn to live with Covid, it was claimed today.

Leaked documents last month hinted that mass testing would stick around until at least July before being limited to care homes, hospitals and schools.

But Whitehall sources say the scheme could be ditched months earlier because the Treasury wants to slash annual Covid spending by 90 per cent — from £15billion to £1.5bn.

Free PCR tests could also be abandoned since March 31, but may remain available to more than a million extremely vulnerable patients, as well as in hospitals.

Ministers are also considering scrapping routine contact tracing, according to the Guardian.

Ministers are using the Parliamentary recess to draft their living with Covid strategy and are due to unveil it on February 21 in the House of Commons.

Boris Johnson has vowed to make England the freest country in the world after fears about the Omicron wave never materialised.

Covid cases, hospitalizations and deaths have been trending downwards for weeks, with just 41,648 infections, 35 deaths and 1,413 admissions logged yesterday.

Commenting on the reports, a No10 spokesperson said today that a ‘final decision’ on Covid testing has not been made. They added that it will come to an end ‘at the right moment’. 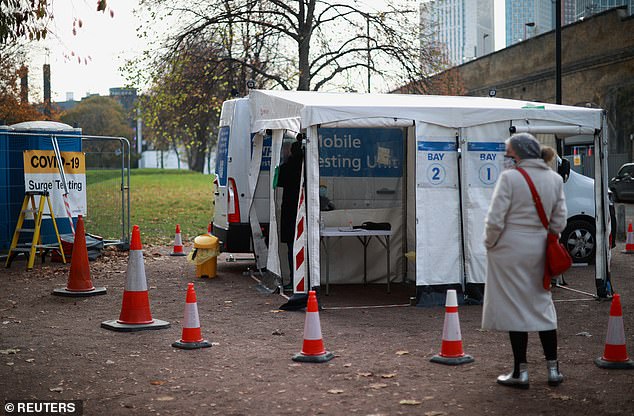 The Government’s ‘Living Safely With Covid’ strategy’, due to be unveiled next week, will mean PCR testing will be limited to those who are most vulnerable or in high-risk settings. Pictured: People queue at at Covid testing site in London 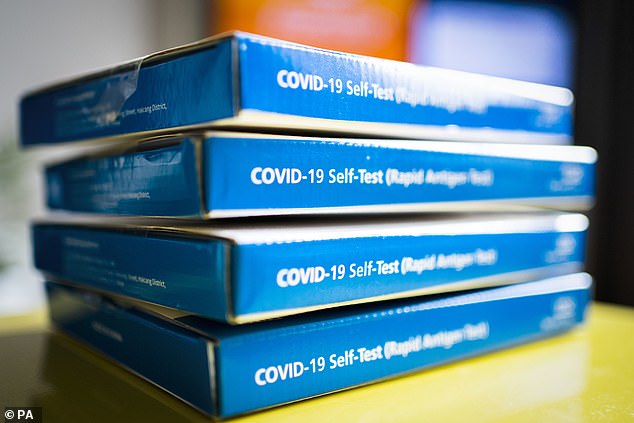 Covid testing has formed the backbone of the UK’s strategy for fighting the pandemic, allowing people to check whether they have the virus and if they need to self-isolate.

It was ramped up under ‘Operation Moonshot’, which saw ministers make swabs widely available across the country.

But it saw the UK spend in the region of £6billion on lateral flow tests alone — with a pack of seven swabs costing around £20.

It is not clear how much was spent on PCR swabs.

Daily Covid cases fall for 13th day in a row

Britain’s daily Covid cases fell for the 13th day in a row yesterday, while hospitalizations and deaths also continued to trend downwards as the Omicron wave subsides.

Government dashboard data shows another 41,648 infections were officially recorded, down 28 per cent on last Monday. Cases have fallen week-on-week on every day since February 1.

The UK is now recording about 55,500 Covid cases every day, on average, which is about the same level as in mid-December when Omicron was just starting to take off.

There were also a further 35 deaths recorded, marking a 22 per cent fall in a week. But virus deaths are usually artificially lower on Mondays due to NHS recording lags.

The seven-day average number of deaths now sits at 178 — almost four times lower than this time last year, before vaccines were widely available.

Latest hospital data also shows there were 1,413 admissions on February 8, down 17 per cent on a week beforehand.

The tumbling statistics come as ministers use the Parliamentary recess to draft their strategy to learn to ‘live with Covid’ like flu, which is due to be unveiled on February 21.

Under plans to ‘live with’ Covid, Whitehall sources told the Guardian that ministers are now looking to wind down systems set up at the height of the pandemic.

Advice to take a Covid test before going to a social event looks to be one of the first measures to be dropped, as well as the need to produce two negative tests to release from isolation early.

Senior cabinet ministers are set to attend a ‘Quad’ meeting today to discuss the proposals.

They will then be put to the UK’s four chief medical officers tomorrow, and finalized on Friday.

A ‘Covid-O’ meeting, chaired by Michael Gove, will also take place on Sunday to make any final tweaks to the measures.

Mr Johnson said before Parliament broke up last week that the Government would press ahead with plans to live with Covid so long as the data continued to trend in the right direction.

Yesterday Covid cases dropped for the 13th day in a row, with 41,648 new positive tests recorded.

There were also a further 35 deaths, marking a 22 per cent fall in a week.

Latest hospital data also showed there were 1,413 admissions on February 8, down 17 per cent on a week beforehand.

Asked yesterday if he was planning to scrap free PCR tests, the Prime Minister said: ‘We’ll continue to work with our colleagues in Scotland but I believe the similarities in our approach vastly outweigh the differences’.

A No10 spokesman told the Guardian: ‘We haven’t made any final decisions on the future of testing.

‘We have said free testing will come to an end at the right moment. Those decisions need to be made this week in terms of exactly when that time is, what comes to an end and what is retained.

‘All of that will be considered and we will set it out in the strategy. We will retain the ability to monitor coronavirus as we do other viruses.’ 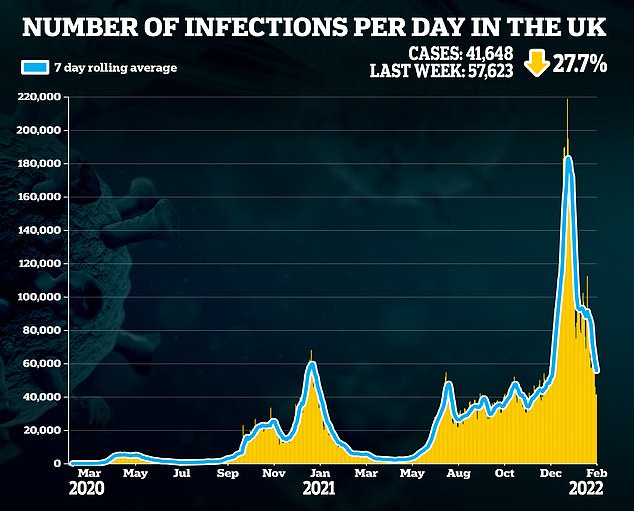 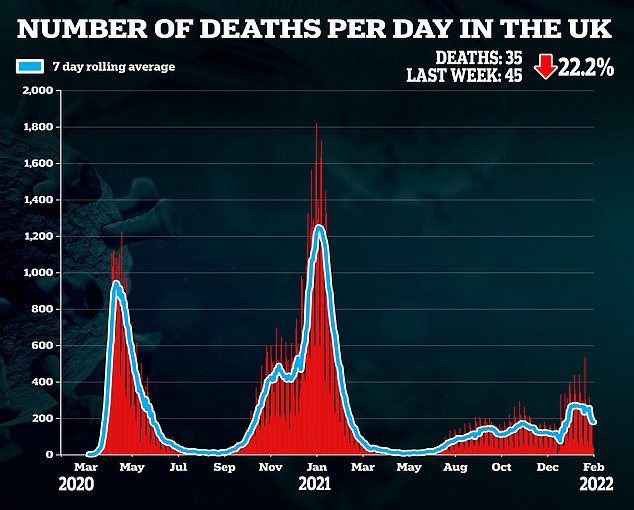 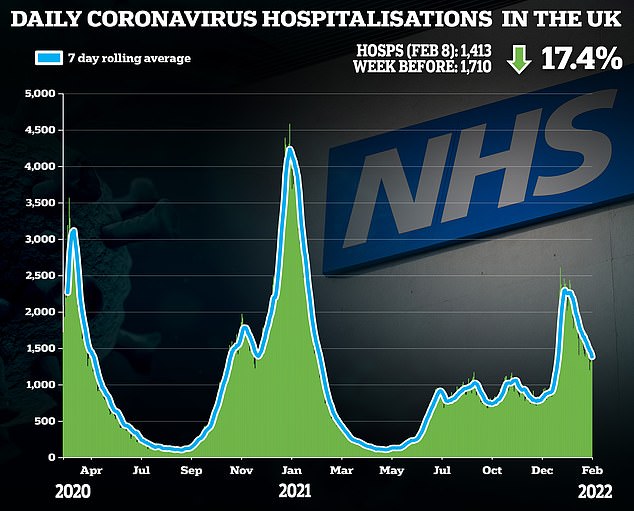 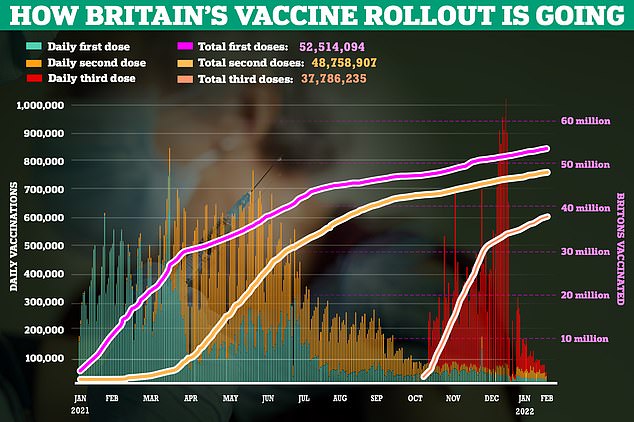 This sees the most vulnerable people who test positive for Covid offered antiviral drugs — molnupiravir and paxlovid — to kill off an infection.

A Whitehall source said Covid antivirals were one of the main tools for ‘learning to live with’ Covid.

They added: ‘If [the Treasury] basically put this trial in the bin, it’s very short-sighted.’

Contingency plans are also likely to be included to ensure testing can be ramped back up if a new Covid variant emerges.

However the plans are still in ‘live discussion’ among ministers and final decisions about the strategy are yet to be made, a source told The Times.

Last month Professor Iain Buchan, chair in public health at the University of Liverpool who led a trial of lateral flow tests in the city, said Britain’s approach of making the tests freely available for months, unlike many other countries, had been a success, and cautioned against introducing charges for tests.

And Professor Jason Leitch, Scotland’s national clinical director, said it is ‘too early’ to decide whether free lateral flow tests can come to an end.

Earlier this month Boris Johnson piled the pressure on Nicola Sturgeon and Mark Drakeford to scrap the last remaining Covid curbs after the Prime Minister dramatically announced his intention to ax all virus restrictions in England by the end of the month.