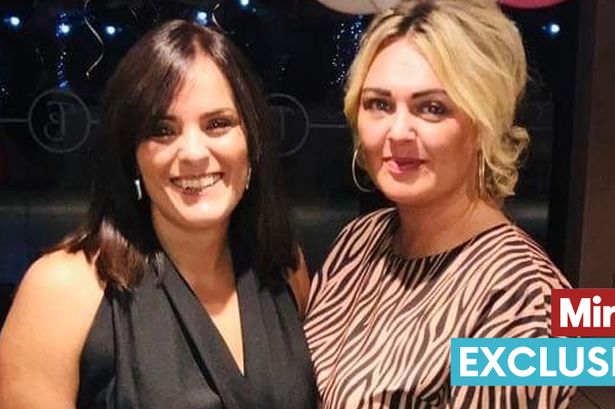 Heartbroken Jenny Dees has told how a charity fraudster posing as her pal pocketed the cash donated for a tribute to her son.

The grieving mum says she trusted Kayleigh Pepper to look after the donations for a school memorial garden for Stanley, six, who was accidentally shot dead by his great-grandfather.

But Pepper – who made a guest appearance in EastEnders after her brother was knifed to death – allegedly used the cash to fund nights out, a new look, clothes and a holiday to Benidorm.

Jenny, 44, said: “It sickens me to the pit of my stomach. That someone can befriend me and care for me, all the while knowing they are taking money donated in my son’s name, makes me feel ill.

“She sat on my sofa and comforted me over Stanley’s loss while she was using the money to help fund a lifestyle she couldn’t afford.

Kayleigh Pepper at a launch of an anti-knives campaign
(

“I’ve been told she went on three holidays in 18 months and she was always on nights out, looking perfectly coiffured with new clothes.”

This week, Pepper, 36, appeared in court and admitted taking £20,000 from a charity she set up in memory of her dead brother – which also received cash for the garden tribute to little Stanley.

But Jenny had no reason to be suspicious when Pepper approached her just days after Stanley’s death. She recalls how Pepper helped raise money for the funeral then offered to organize a fun day in memory of the six-year-old, who died after being shot with an illegal air rifle by Albert Grannon, 79.

Pepper, a fellow school mum, had previously hit the headlines with her police-supported No More Knives campaign. She set it up after her 25-year-old brother Richard was stabbed to death in Hull in 2015.

His killer was jailed for 11 years for manslaughter. Pepper was among the bereaved relatives who made an appearance on a special edition of EastEnders in 2018 which centered around the funeral of stabbed character Shakil Kazemi. And she was experienced in raising cash through the Rich Foundation – named after her brother de ella – to help local families.

Jenny said: “I didn’t know Kayleigh very well, other than to say hello at school, but she seemed so kind and trustworthy.

“I wanted to commemorate Stanley in a fun way which reflected his personality and Kayleigh seemed to genuinely want to help.

“She said she just wanted to take the pressure off me.” Donations for the fun day were filtered through an official GoFundMe account.

There is no suggestion of any wrongdoing over the fun day.

The two mums grew closer and a year later, when Pepper offered to fundraise for a memorial garden at Stanley’s school, Jenny agreed.

Another GoFundMe account was set up and friends and family ran 10k races and organized car boot sales and other charity events.

All funds raised were meant to go straight to St Mary Queen of Martyrs primary school in Hull.

But Jenny says Pepper then asked the fundraisers to transfer the £2,850 raised to the Rich Foundation – an unregistered charity.

In a message to Jenny’s friends, seen by the Sunday People, Pepper wrote: “I wanted to ask if you’d mind if the fundraising money you are donating can go through the Rich Foundation before it gets passed to the school. This is purely for my charity’s status in terms of any live campaigns I have.”

Trusting Pepper, they transferred the cash – but claim it was never given to the school.

The Sunday People has also seen paperwork which shows a bank transfer of £2,850 from one of the fundraisers to the Rich Foundation.

Jenny claims that when the school asked Pepper about the money, she blamed the missing funds on her – saying Jenny had used it for fertility treatment to have her daughter Tilly, now aged 20 months.

Jenny said: “The school kept asking Kayleigh where the money was as they had already created the garden. The staff told me they didn’t want to ask me for the cash because it was awkward and I was still grieving.

“They later told me that Kayleigh claimed I’d used the money for IVF.

“Thousands of pounds were raised for the garden. I don’t think I’ll ever really know how much was taken in Stanley’s name.”

In September 2019, unaware that Stanley’s school was still waiting for the cash, Jenny staged a ladies night fundraiser with Pepper.

It was only then that Jenny first became suspicious of her pal.

She said: “Kayleigh told me a raffle on the night had only raised £86 but when my friends told me how much they had donated, something didn’t add up.”

It is understood that Stanley’s school complained to the police in early 2020 and an investigation was launched.

But despite suspecting she had been conned, Jenny still had to face Pepper every day at the school gates – until she moved to Tyneside last year.

Jenny said: “She looked like a normal mum taking her kids to school but I knew the police were looking at her.

“I started having massive anxiety on the school run, worried that she would approach me because she kept trying to call me the day I found out the money hadn’t gone to the school.

“She was also texting, begging to talk to me, to explain, but I knew there was no explaining. She had used my son for financial gain.

“I wasn’t scared of her. I just didn’t want a confrontation in front of Stanley’s twin sister Elsie, who has been through enough.”

On Thursday, jobless Pepper appeared at Hull Crown Court under the name Kayleigh Towler and admitted fraud by abusing her position as a trustee of the Rich Foundation between July 1, 2018 and April 2020.

The judge agreed she would be dealt with on the basis of the lower amount.

The court heard the funds had been spent on food and clothes, but Facebook pictures showed a series of nights out, a holiday to Benidorm and Pepper’s remarkable transformation from a plain mum to glamorous
blonde, with perfect hair and expensive-looking outfits.

The judge warned Pepper could be jailed when she is sentenced next month – but that will do little to ease Jenny’s sense of betrayal or the pain of losing her son.

She launched a campaign to tighten the law on air weapons after Stanley was shot with a dangerously-modified rifle at a family gathering in Sproatley, East Yorks. The lad’s final words were: “Why have you shot me, Grandad?”

Grannon, who has never apologized to the family for shooting Stanley, admitted a manslaughter and was released from jail in January 2021 after serving half of his three-year sentence.

Jenny says: “I’ve been through a million emotions over what Kayleigh did, through tears, anger and feeling idiotic that I didn’t see it.

“Friends have told me that she went to Marbella and Benidorm in one year – trips that her mates talked about on Facebook in 2019.

“How could she have afforded that as a single mum on benefits?

“I always wondered how she managed, but it never crossed my mind that she would be using Stanley to do it.”