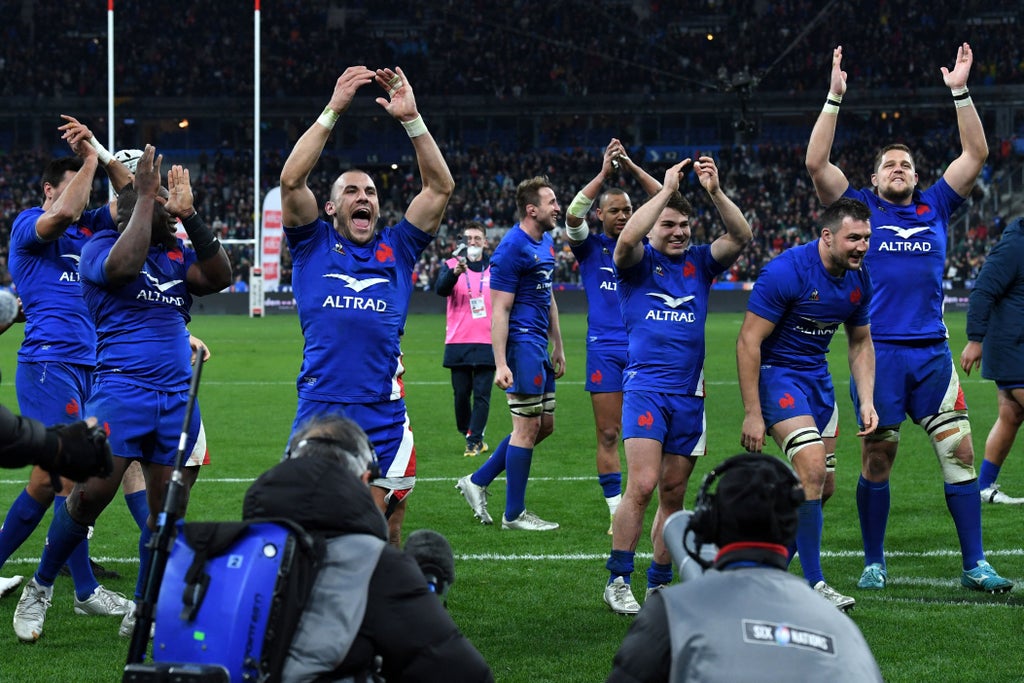 Antoine Dupont’s try just 67 seconds in set the tone for a breath-taking evening of free-flowing rugby at a raucous Stade de France.

Ireland recovered well from the early setback and converted scores from Mack Hansen, Josh Van Der Flier and Jamison Gibson-Park saw them threaten to pull off a stunning comeback success.

But indiscipline ultimately proved costly for Andy Farrell’s visitors as six Melvyn Jaminet penalties, plus a second-half try from Cyril Baille, helped Les Bleus take a giant step towards a first title since 2010.

Ireland arrived in the French capital having not been beaten since suffering defeat to France on this weekend last year but without the services of injured skipper Johnny Sexton.

Joey Carbery filled in at fly-half to make his first Six Nations start, while lock James Ryan took on the captaincy.

Both sides began the tournament with bonus-point wins and pre-match talk was dominated by this being a potential early title decider.

While no Six Nations championship is won in round two, the game certainly lived up to the hype, launched by a breathless opening 10 minutes in which France flew out of the blocks.

Roared on by a passionate home crowd, live-wire Dupont dived over following a huge carry from Uini Atonio and fine offload from Romain Ntamack, with a conversion and penalty from Jaminet swiftly stretching the scoreboard to 10-0.

But Fabien Galthie’s hosts had no chance to enjoy their early cushion as Ireland immediately hit back.

Australia-born Hansen claimed his maiden Test try in bizarre fashion, racing forward to unexpectedly pluck Carbery’s restart kick out of the air and power over wide on the left in just the sixth minute.

Carbery – filling the sizeable boots of former Racing 92 player Sexton, who received jeers from the stands when he appeared on the big screen – coolly added a tricky conversion, his first of three.

Faced with the formidable physicality of the French pack, Farrell’s men were being forced into far more mistakes on this occasion.

And their repeated indiscretions were proving expensive, with a further three Jaminet penalties putting the hosts 19-7 ahead at the break.

Full-back Jaminet landed a monster penalty kick from halfway just after the restart but Ireland were not about to roll over.

They responded with two converted tries in six minutes to reduce their deficit to a single point at 22-21.

Van Der Flier broke off from a maul to touch down following an Irish lineout, before Gibson-Park – who was at fault during France’s rapid start – ghosted through the middle to cross under the posts.

Sensing a momentum shift, the home crowd raised the noise levels and their side duly responded.

Prop Baille bulldozed over to claim Les Bleus’ second try of the evening, with Jaminet’s only wayward kick of the game meaning the Irish were only six points behind.

A Carbery penalty then left proceedings finely poised going into the final seven minutes, with the tension on the terraces almost palpable.

But Irish resistance was fatally broken with three minutes to go, with the impressive Jaminet again at the heart of the action.

The Perpignan player was denied a try after replays showed he had not grounded properly under pressure from Dan Sheehan but recovered to slot another penalty.

Cheers of joy – mixed with some relief – greeted the final whistle as France ensured they are the sole team still in Grand Slam contention going into round three.