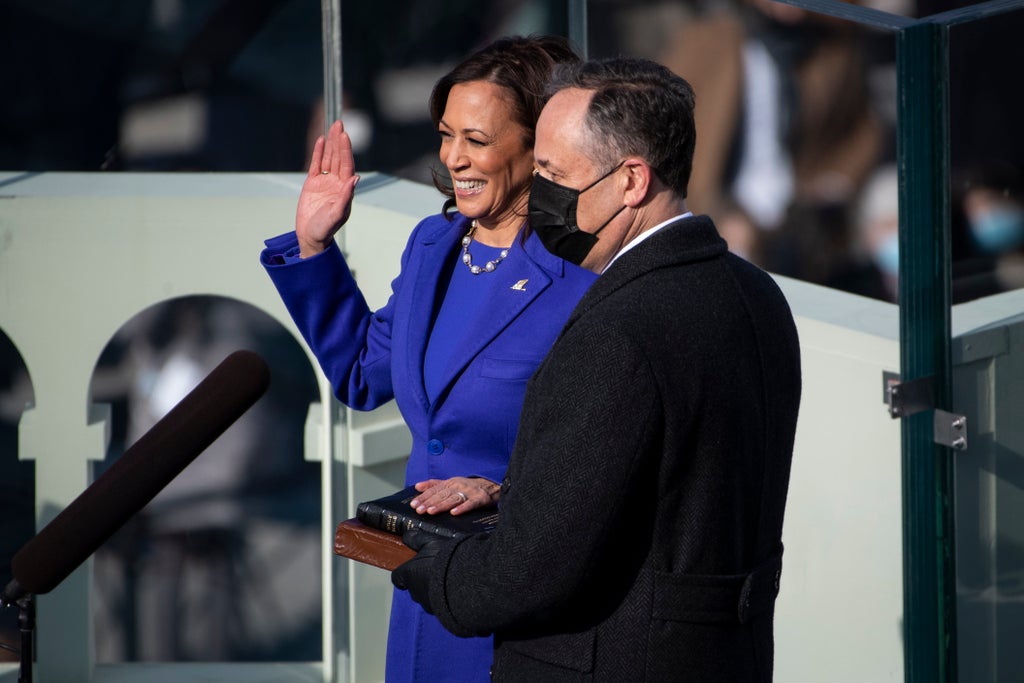 The news that Stephen Breyer, one of the three remaining liberals on the Supreme Court, is expected to retire soon has set off fevered speculation about who will replace him. On Wednesday, a pair of Fox News hosts had an unlikely suggestion: vice-president Kamala Harris.

President Biden pledged to nominate the first Black woman to the Supreme Court During his 2020 campaign, and the vice-president has reportedly been unhappy with her role in the administration thus far.

“This person has to be a woman. She’s got to be Black, and she’s got to be younger. Anybody thinking what I’m thinking?” said Fox host Harris Faulkner on Wednesday. “They don’t know what to do with Kamala Harris in the White House right now. I can’t be the only person who is seeing this.”

The move would serve a double-benefit, argued Ms Faulkner: fulfilling a campaign promise and eliminating a 2024 rival for Joe Biden if he seeks re-election.

Former Trump administration Kayleigh McEnany agreed, calling the theory “credible,” while acknowledging it doesn’t yet have any factual basis.

“That was playing in my mind from the moment we heard about this retirement. It is, politically speaking, if you are not happy with your vice-president and you want her in a different role, there is no greater role than on the Supreme Court. It’s a role that anyone would be honored to have.”

It’s not such a far out theory. The possibility of moving Harris, at least on the theoretical level, has been discussed in the Biden orbit since at least November, according to CNN.

Though the president has struggled to get key parts of his agenda through the Senate, he should be able to confirm a new Justice without much opposition, as even more centrist Democrats who oppose his other plans tend to vote with him on judicial appointments.

The Independent you have reached out to the White House for comment.

Since the Biden administration took office, there has been a steady stream of reports about dissatisfaction from within the vice-president’s office, as well as between president Biden and vice-president Harris.

Later that year, scores of current and former aides and officials reported to CNN that the vice-president felt she’d been sidelined in the administration on key issues like Afghanistan and passing Biden’s domestic agenda.

“It is natural that those of us who know her know how much more helpful she can be than she is currently being asked to be,” Eleni Kounalakis, lieutenant governor of California and a longtime friend of Kamala Harris, told CNN in November. “That’s where the frustration is coming from.”

Top White House officials have pushed back against this characterisation.

“I think it’s no secret that the different things she has been asked to take on are incredibly demanding, not always well understood publicly and take a lot of work as well as a lot of skill,” Transportation Secretary Pete Buttigieg told New York Times in December. “You have to do everything except one thing, which is take credit.”

The president himself has praised vice-president Harris’s performance in recent days, telling her before an audience at a Democratic National Committee event that, “I love you… You always have my back. You’re really amazing. You’re the best partner I could imagine.”

The president also said he would stick with Ms Harris as his VP if he runs again in 2024.

A sitting vice-president has never gone on to serve on the US Supreme Court, though former president William Howard Taft did.

Fifteen former US Senators have served on the high court.