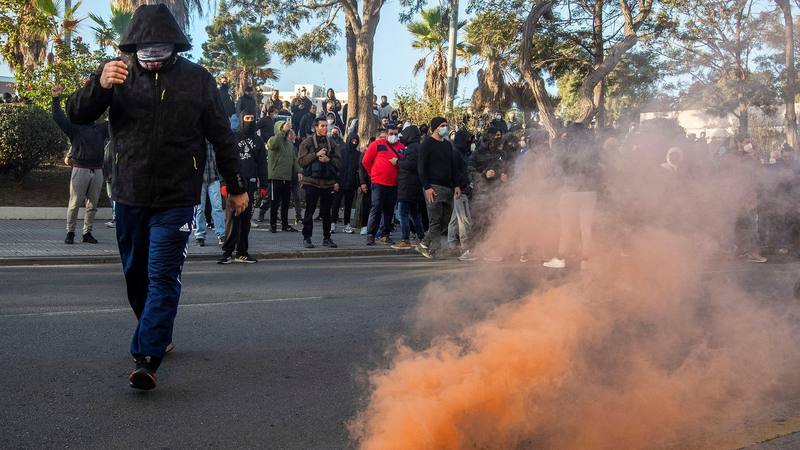 The workers of the metal sector of Cádiz face the fourth day of indefinite strike for the renegotiation of the collective agreement and that has filled with barricades, street and highway shutdowns and incidents the main industrial nodes of the province.

The police presence, reinforced this morning, has prevented access to the shipyards from being blocked, as in previous days, so that this time the buses that transport the workers have been able to pass template by Navantia, who are not called to this strike, because they have their own agreement.

The security reinforcement has also been noticed in the vicinity of the two bridges in Cádiz, to avoid new traffic cuts in the bay of Cadiz, which today, for the first time, since the strike began has dawned without circulatory problems.

The provincial secretary of the FICA-UGT union in Cádiz, Antonio Montoro, recognizes in RNE that the agreement is still far away and he does not know when the negotiations will be able to resume. “We will continue fighting for a worthy agreement that guarantees our purchasing power. We are not asking for anything above the CPI and we are not asking for anything that will force the closure of companies as they constantly threaten us in negotiations ”, he stated.

The mornings of RNE with Íñigo Alfonso – Fourth day of strike by metal workers: “What little we have is taken away from Cádiz” – Listen now

In addition, the trade unionist has lamented the labor situation in which the province finds itself. “Cádiz no longer believes in political promises because they have never been fulfilled. What little we have they take away, despite the fact that we have been pioneers in the automotive, aeronautical or naval industries. “We are always news for what they take away. We are never news for what they bring”.

Concentration before the employer

Some 200 workers concentrate from seven in the morning at the gates of the FEMCA headquarters, also protected by an important police deployment, where they have been thrown some firecrackers and some protesters have rebuked the agents.

The fourth day of the strike is held after 2:00 a.m. rotate the negotiation table in which unions and the Federation of Metal Entrepreneurs of Cádiz (FEMCA) had sat for eight hours to try again to reach an agreement that would call off the protest.

The Secretary General of FEMCA, José Muñoz, explained that at this meeting entrepreneurs have made “tremendous moves”, “looking for new ways” to “accommodate” the objective of the unions, that wages increase from 2021 according to the CPI so as not to lose purchasing power, with the financial approaches of companies, which understand that until 2023 or 2024 they will not recover the muscle lost with the coronavirus pandemic.

In this meeting, the last proposal to combine both objectives has been that the salary increase outside 2% in 2021, 2022 and 2023 and that at the end of this last year a review was made and wages were updated of these three years based on the CPI, with which the workers recovered, although within two years, the purchasing power that they would have lost in these three years.

Unions, which They have rejected this offer and a similar one that had been raised by the labor mediation service of the Employment Department of the Junta de Andalucía, which supported the new round of dialogue.

This Thursday, the provincial secretary of Industry of UGT, Antonio Montoro, highlighted that 75% of the jobs in the metal sector of the province are temporary.

The Cádiz metal sector is made up of 29,000 workers and 5,600 companies, which include both auxiliary industries of the large factories in the naval and aeronautical fields (Navantia, Airbus). such as mechanical, plumbing or metal carpentry workshops, as explained by the general secretary of FEMCA.