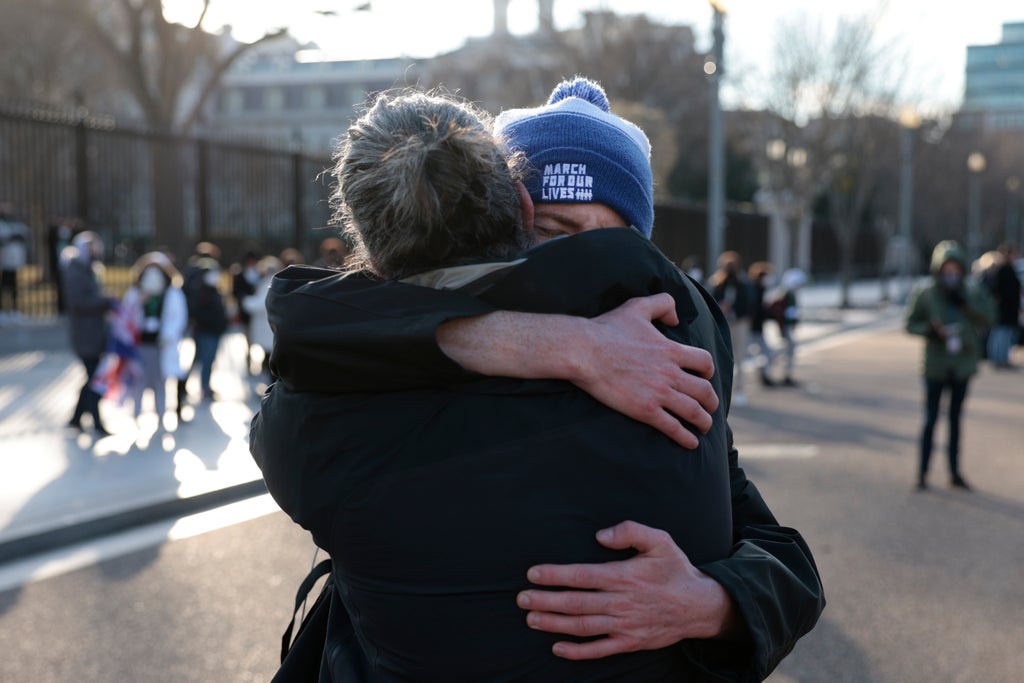 One father balanced on a crane 150 feet in the air, demanding a meeting with President Joe Biden. Another planned to eat crepes, his son’s favorite food. A mother went to a cemetery with family and friends carrying flowers and sage.

It’s been four years since their children were killed on Valentine’s Day at Marjory Stoneman Douglas High School in Parkland, Florida. The attacker fatally shot 14 students and three staff members in a shooting that continues to haunt – and motivate – the parents, relatives and classmates left behind.

In the shooting’s aftermath, survivors inspired hundreds of thousands of demonstrators to march in the nation’s capital to demand action against gun violence. Parents launched nonprofit organisations, lobbied lawmakers and ran for local school boards.

It still hasn’t been enough, they said. Since Parkland, at least 89,000 students have been exposed to gun violence on K-12 campuses during regular hours, according to a database from Washington Post.

In those 105 shootings, 28 people were killed and another 90 were wounded. In 2021, there were 42 school shootings, more than during any year since at least 1999, despite many schools remaining closed last winter.

Just before dawn on Monday, Manuel Oliver stood in the frigid morning air atop a crane near the White House and unfurled a sign with a photo of his son’s face.

Joaquin Oliver was 17 when he was killed. His father is now an activist demanding reform. He criticized President Joe Biden on Monday for what he believes has been a lack of action on campaign promises to combat gun violence.

Manuel and his wife, Patricia Oliver, were hoping to bring attention to the initiative they launched with the March for Our Lives and Guns Down America, called Shock Market, a website tracking gun violence since Mr Biden’s inauguration.

“We decided to grab Mr Biden’s attention, and that crane was exactly across from the White House,” Patricia Oliver said. That way, she said, “there is no way to say, ‘I didn’t notice it.’”

David Hogg, who escaped the shooter’s rampage, also came to Washington on Monday to get the president’s attention. He can still recall what he and his schoolmates heard four years ago in the aftermath.

“We were told, ‘If you just turn out, things will change,’” he said. And they did turn out, joined by activists, young and old, in cities across the country. Mr Hogg was 17 then. Now he’s 21. In the interim, America’s gun violence epidemic has only gotten worse. “I’m just so frustrated,” he said. “I’m heartbroken.”

Mr Hogg joined two dozen other people in the cold outside the White House, including Manuel Oliver, who was one of three arrested Monday morning in the crane incident and charged with unlawful entry and destruction of property.

Mr Oliver briefly addressed the small crowd, some of whom were students, who chanted, “No more gun violence” and “What’s your plan?” As another group of young tourists snapped photos in front of the White House fence, Mr Oliver shouted to make himself heard. “You are not alone in this,” he said. “You have us here to support you.”

Despite Democrats taking the White House, Senate and House in 2020, no federal gun safety legislation has been passed, and one of Biden’s most significant efforts – nominating David Chipman to lead the Bureau of Alcohol, Tobacco, Firearms and Explosives – failed when it became clear that conservative lawmakers wouldn’t confirm him.

The administration didn’t respond to the specific criticisms or policy demands from the activists, but it did point to a litany of actions the president has taken, or attempted to, in the past year.

Mr Biden has developed a plan to reduce gun violence, and though much of it has been thwarted by unwillingness in Congress to pass his proposed budget, the White House has claimed meaningful successes, most notably, the hundreds of millions of dollars in stimulus funding that , at the administration’s urging, states and cities are using to address gun violence at the local level.

That’s done little to comfort Mr Hogg, who still struggles to comprehend how the wealthiest country on Earth tolerates its children being gunned down day after day, year after year.

“It is incredibly messed up and disgusting that it’s on the survivors of gun violence, and young people especially, to demand… the right not to be shot in our schools and in our communities,” he said. “It’s exhausting seeing this stuff again and again.”

Patricia Oliver and her husband have devoted much of their life to ending that cycle, but always with them is the boy whose death set them off on this journey.

He was an old soul with “big thoughts,” she said, but he also loved to be silly.

While his mother cooked, he would tease her, pretending he was in the roller-skating scene from the movie “Xanadu” while dancing across the kitchen floor. He loved cheering on the Miami Heat, wrote poems and jokes, and liked to sing around the house.

Max Schachter, whose 14-year-old son Alex was killed in the shooting, has become a national advocate for school safety. He’s traveled to Washington and across the country, advocating for policy changes as he launched the nonprofit Safe Schools for Alex to provide resources for school safety.

But on Monday, he took a break and spent time with his family to remember their favorite moments with Alex. Mr Schachter thinks back to watching his son sink a three-pointer in the local basketball recreation league to make it into overtime. He loved the marching band and played the trombone and baritone.

He can still picture the mornings with Alex rushing to get ready for school. “Can I just brush your hair?” his younger sister Avery would ask him. Alex would say yes, Mr Schachter said, remembering how she would comb while he ate his breakfast.

Avery, a sophomore at Marjory Stoneman Douglas, is now 15, a year older than Alex was when he was fatally shot. Mr Schachter planned to spend the day with her and his two older children de ella, eating crepes in honor of Alex, whose favorite meal was a Nutella crepe.

Lori Alhadeff has also turned her anguish into action, winning a seat on the Broward County school board in 2018, months after her daughter Alyssa was killed at Parkland.

Since then, she has advocated to pass a school safety law named after her daughter, and she and her husband launched a nonprofit group called Make Our Schools Safe. But Monday, the anniversary of her daughter’s death de ella, is reserved as a day to celebrate Alyssa’s life de ella.

The family and close friends went to the cemetery in North Lauderdale, Florida, to visit her. There were photos of Alyssa, an infinity symbol and colorful flowers by her headstone as they shared stories of her life.

“This was supposed to be Valentine’s Day, a day full of chocolate and love. And it’s the worst day of my life,” her mother said to those gathered around. “She should be in college. She should be with her friends from her. She she should be having fun, and oh, she she would have.”