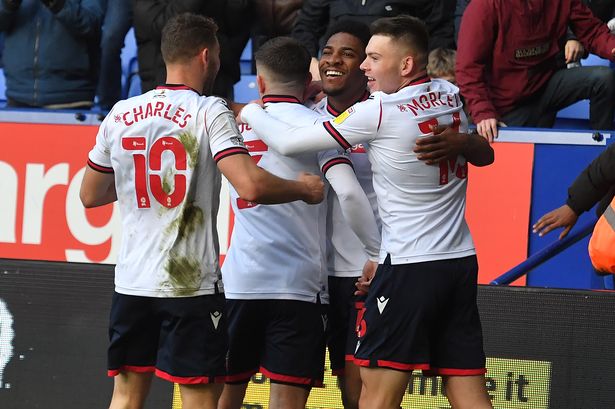 Bolton Wanderers face a key month of action when they return from the international break as they hope to keep their hopes of reaching the League One play-offs intact.

Wanderers are 11th in the third tier of English football and nine points from the top six heading into this weekend.

Though Ian Evatt’s side do not have a fixture after their clash versus Portsmouth was rearranged due to call-ups in both camps, other sides will be in action with half a dozen fixtures to take place.

Bolton may have a greater gap to the play-offs when they do return to action, but for now, Wanderers have seven games left between now and April to keep their hopes of potential promotion to the Championship alive.

There may be little room for error now and realistically Wanderers are going to need close to the maximum points on offer of 21 to have a chance of being in the mix still and challenge the likes of Sunderland and Sheffield Wednesday who are among the sides competing for the play-offs.

And ahead of the return, we’ve picked out four areas which Wanderers will have to address when they return to action.

Wanderers went to a back three in mid-January and it has been a system which has particularly showcased the talents of one player in particular.

Fulham loanee Marlon Fossey had become an integral part of Wanderers’ attacks and had scored once as well as notched five assists in a successful move.

But his time at Wanderers came to a premature end when his season was curtailed due to a torn meniscus which has also prompted surgery.

In the first game since that injury blow and Bolton’s last outing, Kieran Sadlier played in the right wing-back role.

Time will tell if Sadlier will continue in that role until the end of the campaign, or if the return of Gethin Jones might see the vice-captain put out on that flank or perhaps even Lloyd Isgrove.

Or could Wanderers revert to a back four? It is something they did during the home defeat to Plymouth Argyle and looked the better team for doing so.

Fossey’s absence provides Evatt with a conundrum, but he has the tools at his disposal to overcome the issue that the loanee’s unavailability raises.

Beating teams around them crucial

When Wanderers return from the international break, they have a week of fixtures which will essentially decide if their hopes of reaching the play-offs will carry on or fade away.

A trip to the DW Stadium to take on Wigan Athletic will be followed by hosting Portsmouth and Sheffield Wednesday in a crucial eight day period.

Getting something against the Latics would be good for both the tally points and some local bragging rights, but with Wigan looking incredibly likely, not winning that fixture would not be terminal.

The same cannot be said against Pompey and the Owls, two sides who are in the mix for the top six too and are two of Bolton’s rivals to make the play-offs.

Those encounters appear to be six pointers and a pair of losses against Danny Cowley and Darren Moore’s side would probably mean the end of Bolton’s slim play-off ambitions.

Win them both, however, and things could start to get very interesting indeed.

Wanderers have come from behind on numerous occasions this season and it is no shock to see that Evatt’s side have the best record in League One for scoring late on in games.

Their 20 goals scored from 76 minutes onwards ranks as the best in the division, with only Oxford United and Wigan coming close with 18 each.

Another aspect of Wanderers that has proven to be a key feature is what happens when they get the first goal in matches.

They have taken the lead in 13 matches in League One this campaign and have a flawless record when doing so, collecting maximum points from those encounters.

But one thing which Wanderers probably sould tighten up on is the early stages of encounters.

The statistics show that in terms of goals conceded in the opening 15 minutes of games, Wanderers boast the joint worst record in the division with 13 let in, the same as Morecambe and Cambridge United.

If Wanderers can tighten up at the back, particularly early in games which can often give sides something to hang onto, then it could be a recipe for success with their existing goalscoring traits.

Get Charles and Afolayan back firing in front of goal

Dion Charles and Dapo Afolayan have been huge stars for Wanderers this season and especially with their goal contributions.

Afolayan is the club’s top scorer with 13 strikes in all competitions and is still only in his first full season of men’s professional football.

Charles meanwhile has been a huge success since his January transfer window move from Accrington Stanley, scoring six goals since becoming a Bolton player.

However, the goals have dried up of late for the duo, with the pair last on the scoresheet in the 4-0 win over AFC Wimbledon in mid-February.

Though Wanderers have not struggled to score in that time thanks to the likes of Amadou Bakayoko and Jon Dadi Bodvarsson, having the duo back firing in front of goal would give Wanderers a huge boost in the race to be in the top six by the end of April.