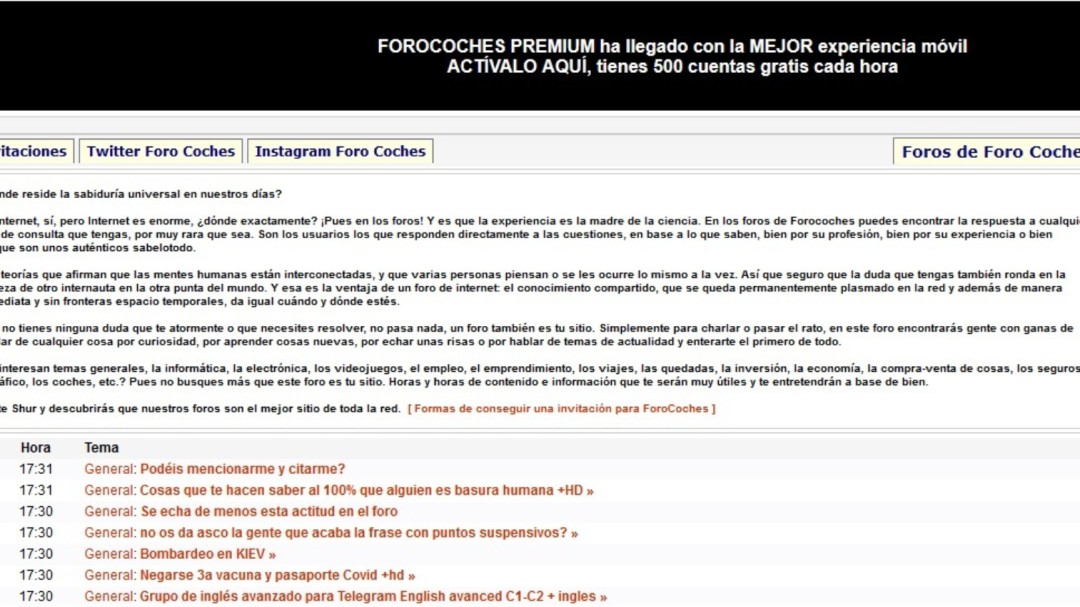 Forocoches, the most used forum in the Spanish language, has announced on the morning of this Tuesday, December 28, the arrival of ‘Forocoches Premium’, a paid version of the platform that would allow certain comments to be positioned more visibly or to reduce the number of ads on screen for 2.99 or 3.99 euros per month, depending on the extras requested.

The surprise came after years of speculation about this possibility among the user community, who were offered for the first time in the history of the forum the option to pay for an improved browsing experience.

However, some of its users have soon realized that it was an innocent, in keeping with the feast of the Holy Innocents.

But not everything in this announcement was a lie, as the forum administrators have exclusively offered the first 10,000 Internet users who clicked on the false payment button the new web design they are working on. This is the first change in the 19 years of life of Forocoches and will be available to the rest of the foreros from next February 1.

Changes in Forocoches after two decades

The new approach is designed for use from mobile supports, preferred by 80% of the forum participants. Thus, it proposes drop-down menus that are easy to handle on small screens, also offering the possibility of viewing it in dark mode, something that the community of Forococheros has demanded ad nauseam.

These changes, as explained by the founder and CEO of the website, Alejandro Marín, have taken almost two decades to arrive due to the historical reluctance of the users themselves to alter the appearance of the page.

Despite the immutability, Forocoches has been able to maintain solid figures in recent years, without the platform being excessively affected by the rise of social networks. Since its inception in 2003, it has accumulated around 900,000 registered profiles, reaching 6.8 million unique users and almost 25 million logins in November 2021, according to data from the company itself.

“Vox has entered the forum with great force”

Due to its size, the web hosts content for all tastes, although for this very reason the site is not exempt from discussions of any kind.

Although the user can find useful information about practically any topic and charity actions have even been organized through their chats, in recent times the accounts that defend ideas of the extreme right and fascism have increased exponentially.

“Vox has entered the forum with great force and even they, from the party, often put references to Forocoches on Twitter,” Marín himself acknowledged to ICON magazine in 2018. Since that date, the popularity of the party has gone on increase. Along the same lines, you can read threads in a tone of contempt for women or feminism, among others.

But if the platform is known for something, it is because of the large number of “trolling” that its users have mobilized. Among their most famous jokes, the Forococheros have sent mariachis to the headquarters of parties such as PP, PSOE or Podemos, coinciding with difficult moments for them.

As far-fetched as it may seem, Spanish politicians have not been the only ones to receive such a peculiar visit. From Forocoches they also managed to send a group of Mexican singers to the doors of the White House as a farewell to Donald Trump, after his electoral defeat.

They also gave the audience and the presenters of the TVE gala in which the Spanish representative of Eurovision was chosen by casting John Cobra as a finalist among them. And they made El Tekila the winner of the Telecinco program Got Talent, a contestant who was not to the liking of the jury and whose triumph the chain itself called “unexpected”.