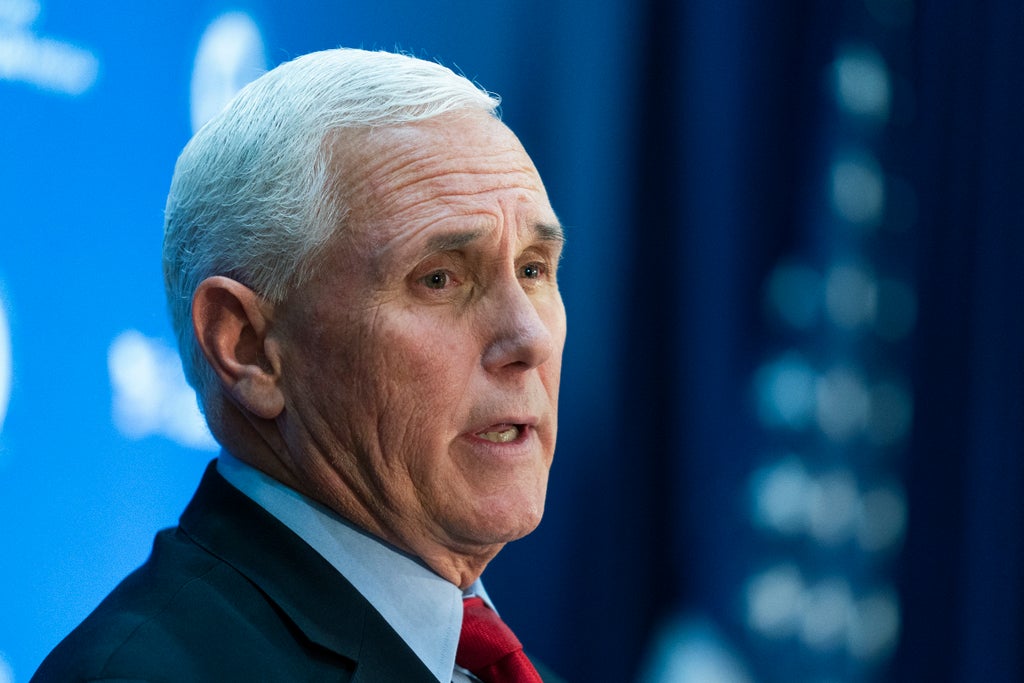 A top deputy to Mike Pence in the White House who has remained his close ally unloaded on the inner circle cultivated by former President Donald Trump on Sunday, who he liked to “snake-oil salesmen” for their efforts to overturn the 2020 election.

Marc Short treaded a fine line on the issue of the 2020 election during an interview with Meet the Press on NBC. He backed up the assertions made by the former vice president last week at the Federalist Society, where Mr Pence argued that he never had the constitutional authority to halt the certification of some states’ election results by the Senate.

“President Trump is wrong,” Mr Pence said at the event on Friday. “I had no right to overturn the election.”

Mr Short laid blame for that effort to convince his boss of the opposite at the feet of Mr Trump’s closest advisers, who he said were giving the president “a lot of bad advice” regarding his options after the election was called in Joe Biden’s favour.

“Unfortunately the president had many bad advisers who were basically snake-oil salesmen,” said Mr Short.

He did not, however, go as far as anti-Trump Republicans such as Maryland Gov Larry Hogan or establishment Republican senators close to party leadership have gone in their efforts to distance themselves from the ex-president’s unfounded claims about the 2020 election. On Sunday Mr Short contended that he had “significant concerns” about the veracity of the 2020 election results, which were touted as uncorrupted by fraud by America’s top law enforcement authority, Attorney General William Barr, as well as other authorities during the Trump administration.

He also dampened hopes for Mr Pence meeting with lawmakers on the January 6 committee, which has summarized his work in the House following the winter break and has spoken with numerous aides to the former vice president including Mr Short himself in recent weeks.

“It’s very difficult for me to see that scenario unfolding,” he said of Mr Pence speaking with the panel.

The Hill reported that the committee appears to be taking a moment to think about whether lawmakers will even extend an invitation to the former vice president. Rep Zoe Lofgren, a Democrat on the select committee, indicated to the news outlet that lawmakers were uninterested in hearing what they already knew, suggesting that they believe there is little if anything they can learn from bringing Mr Pence to Capitol Hill.

“We’ve gotten a lot of information about the vice president from many sources so we’ll see [if we need to invite him],” Ms Lofgren told TheHill. She added: “We’re not afraid of following any source, but we don’t want to spin our wheels on something we already know”.

Mr Pence’s speech in Florida comes as he has continued appearing at GOP-aligned events across the country in recent months. He headlined an event hosted by Iranian resistance figures in Washington DC late last year, and also spoke at events in Virginia about education, a topic that has come to new relevance for grassroots conservative activists seeking to challenge the race way is taught in public schools and has translated most recently into book-banning efforts targeting school and sometimes public libraries.

As a result, he is considered a potential contender for the 2024 GOP nomination even as Mr Pence faces the steep uphill battle of overcoming the fury that many Trump supporters still feel over his refusal to overturn the election.

His most recent remarks regarding his authority in 2020 have elicited a flurry of attacks from his former boss, Donald Trump. The former president continues to hold court at his Mar-a-Lago club in Florida while appearing at campaign-style rallies in states including Texas and Arizona.

In a bizarre statement last week, Mr Trump said that the House select committee should switch its focus to investigating why Mr Pence did not act to interfere with the election certification on January 6, despite his continuing inabiltity to produce any hard evidence for fraud that could have affected the election outcome and statements from Mr Barr as well as other state, local and federal officials asserting that no significant fraud had occurred.