Pep Guardiola knows all about trends and fashions in football, in part because he’s been the trendiest, most fashionable coach of the past decade.

“In world football copy-paste is quite usual. The manager of the team who won, everyone wants to play in that way,” he said at his Friday press conference.

This is certainly true, with coaches across the globe seeking to mimic aspects of the positional play model he has refined to near perfection across spells with Barcelona, ​​Bayern Munich and now Manchester City.

But Guardiola was not talking about himself. At that stage of the briefing, he was lavishing praise upon Tottenham boss and weekend opponent Antonio Conte.

“When he arrived, his impact was clear. Many teams started to play five at the back,” he said of Conte’s triumphant arrival in English football in 2016/17, when the Italian steered a dominant Chelsea to the Premier League title.

Although you’d never think this of a man who wears his footballing ideals so proudly, Guardiola himself was perhaps a little guilty of hitting Ctrl+C at this time,

When Chelsea came from behind to claim a 3-1 win over City at the Etihad Stadium in December 2016, the hosts started with three at the back.

John Stones lined up alongside Nicolas Otamendi and Aleksandr Kolarov at centre-back. Throw in Jesus Navas and Leroy Sane as the wing-backs and the whole setup looks about as secure as your Storm Eunice-battered garden fence does right now. 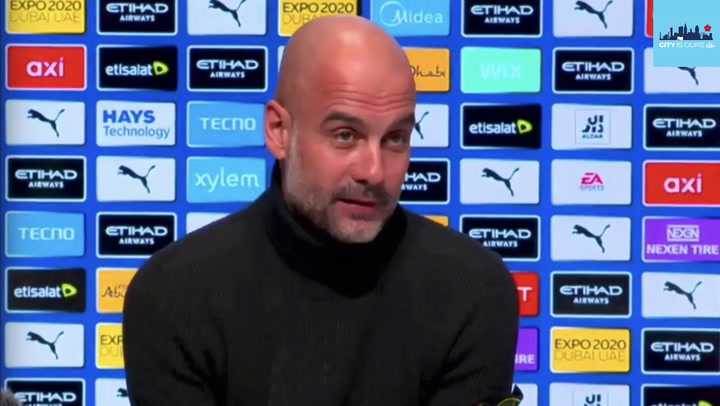 Of course, Pep didn’t simply look towards the King’s Road for the latest fashion trends. At Bayern, he had become a more experimental coach who dabbled in various formations and unveiled innovations such as his inverted full-backs ploy.

But, at a time when City look so assured, so complete and so comfortable in their own skin, it is interesting to look back at the one spell in England where Guardiola’s convictions seemed a little shaken.

The week after the Chelsea defeat, City lost 4-2 at Leicester in a game when they were 4-0 down. At some point as Jamie Vardy’s goal’s rained in, three at the back was ditched.

A fairly conservative 4-2-3-1 got a bit of an airing before a midfield diamond inspired a 5-0 FA Cup win at West Ham and was unceremoniously smashed to pieces in a 4-0 defeat at Everton.

Next up were Tottenham at Eastlands – a match that remains of under-acknowledged significance in the Guardiola era.

Despite obvious flaws in defence, especially at full-back, Guardiola went back to what he knew best. City were going to stand or fall for what had made him great.

They lined up in an attacking 4-3-3, where Yaya Toure was the holder in midfield behind David Silva and Kevin De Bruyne. Sane and De Bruyne fired City into a deserved 2-0 lead before the aforementioned frailties at the back helped Spurs to a 2-2 draw.

Those weaknesses would be addressed in the summer of 2017, by which point Guardiola’s attack was close to being perfectly well-grooved – De Bruyne and David Silva supplying the ammunition for Sane, Raheem Sterling, Sergio Aguero and the newly arrived Gabriel Jesus.

The 100 point season followed and an unprecedented period of ongoing success was up and running. All the best trying to copy and past that – Guardiola is a one-off.

Did Tottenham at home during Pep Guardiola’s first season represent a turning point at Manchester City? Follow City Is Ours editor Dom Farrell on Twitter to get involved in the discussion and give us your thoughts in the comments section below.