Skip to content
Home News For many asylum-seekers, flying to Mexico is ticketed to the US 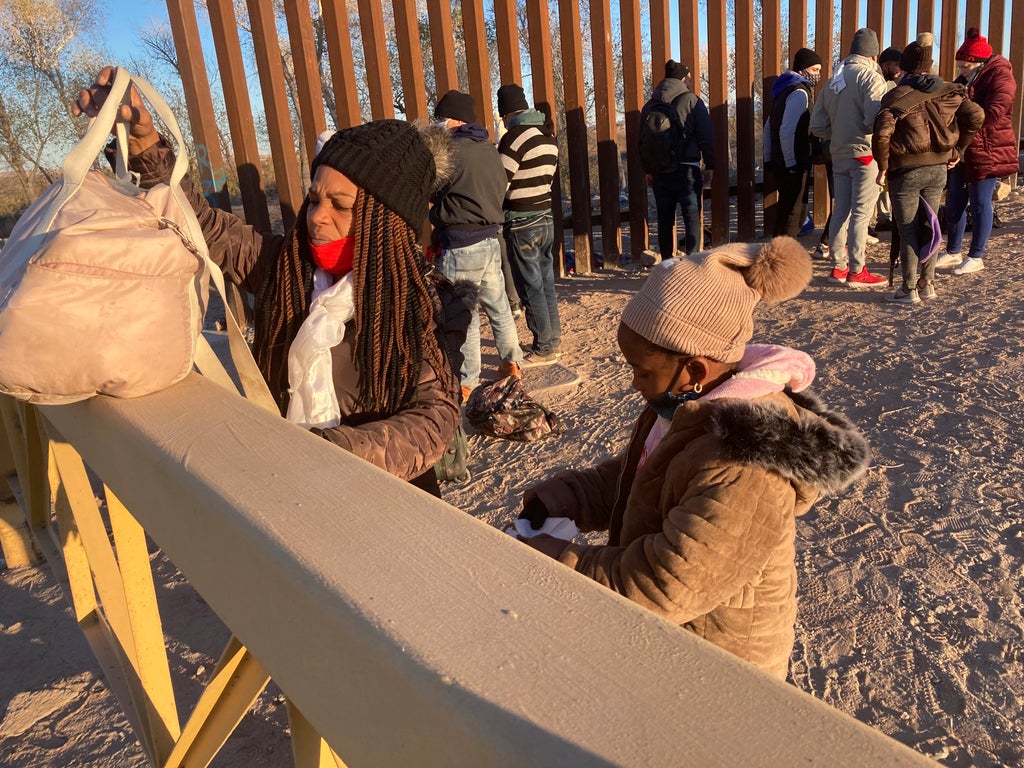 Seated on a metal folding chair in the front row among dozens of asylum-seekers awaiting COVID tests in Arizona, Gloria Estela Vallora reaped the benefits of her Colombian passport.

She and eight family members, ranging in age from 4 to 63, flew to Cancun for two nights in the Mexican beach resort town, caught another flight to Mexico’s border with the US, walked 20 minutes to US agents and spent a night in custody . Within hours, they would be with a friend in Utah

For Colombians and other nationalities that don’t need a visa, flying to Mexico can be a ticket to seek asylum in the United States. Once arriving at a Mexican border city, they can walk across the border in broad daylight and surrender to US agents. In doing so, they avoid the dangers of traversing Mexico and other countries over land and circumvent sweeping US asylum restrictions.

The US has expelled migrants more than 1.5 million times under a public health order in effect since March 2020 to address the coronavirus, but it hasn’t been applied across the board.

Mexico accepts back its own migrants and those from Guatemala, Honduras and El Salvador under the order, known as Title 42. Other nationalities are eligible for expulsion, but the US frequently won’t fly them out due to the expense and strained diplomatic relations with their home countries, notably Cuba and Venezuela Instead, they are often quickly released in the US to pursue asylum.

The biggest beneficiaries are people from Colombia and other nations who can enter Mexico visa-free, allowing them to fly to the US border and walk across.

“At my weight, it’s not as easy to get around as it used to be,” said a smiling Vallora, 59, who fled violence in the city of Bucaramanga. She spoke in a warehouse outside Yuma where a health-care provider tests released migrants for COVID-19 before driving them to Phoenix’s Sky Harbor International Airport in chartered buses.

Under US pressure, Mexico is requiring visas from more nationalities, delaying or potentially eliminating the option of flying to the border. Their only alternative may be traveling illegally over land.

Last year, Mexico began requiring visas for Brazilians and Ecuadoreans and, on Jan. 21, did the same for Venezuelans. Mexico’s Interior Department said the latest move responded to a tenfold increase in Venezuelans traveling “in an irregular manner to a third country,” a clear reference to the United States.

In December, US officials stopped Venezuelans nearly 25,000 times on the border, more than double September’s count and up from only about 200 times the same period a year earlier. Venezuelans were the second-largest nationality encountered in December, behind Mexicans.

A WhatsApp group named “Venezuelans to the United States” has been buzzing with people wanting to know how to get a Mexican visa and which consulates have the soonest appointments. Some posts offer help for a fee, while others warn against scams.

A WhatsApp post on Jan. 23 advertises a guide on a flight to the Mexican border city of Mexicali and across the border for $1,800, with food and lodging. It says Mexican authorities will seize their passports at the airport and return them for $100.

Groups of about 75 to 125 migrants gathered at sunrise several days this month at an opening in the border wall in Yuma, the Border Patrol sector where more than one of three Venezuelans was stopped in December. Venezuelans were virtually absent, as were Mexicans and Central Americans. They were largely Colombian, Cuban, Indian, Haitian and Russian.

Venezuelans still being released said they squeaked into Mexico before the visa requirement took effect and condemned the measure.

“It’s a travesty,” said Daniel Sandrea, who flew to Mexico Jan. 19 with his 13-year-old son and planned to settle in Chicago with a friend.

Sandrea, 42, said he left Venezuela because he could no longer obey orders to threaten and harass opponents of President Nicolas Maduro as a police officer in the city of Merida. “We are fleeing a dictatorship,” he said while waiting for a bus to Phoenix at the the Regional Center for Border Health’s warehouse in Somerton, a sunbaked Yuma suburb of 14,000 people whose old Main Street buildings hint at its 19th-century roots.

US authorities stopped Colombians — many of them relatively well-off — nearly 4,100 times in December, up from 73 times a year earlier.

Alejandro Pizza, 34, came with an extended family of 16 this month after deciding his business selling imported farm equipment in Bogota could not survive extortion threats. They vacationed four days on Cancun beaches before flying to the border city of Mexicali, where they hired four Uber drivers to bring them to an opening in the border wall in Yuma.

Flights often arrive after 10 pm in Mexicali, where migrants find a hotel before taking a bus or taxi about an hour east to Los Algodones, a town full of dentists and optometrists who cater to American and Canadian snowbirds.

From there, they walk about 10 minutes on a concrete ledge from the Morelos Dam to US agents in Yuma. Others hike a bit longer to another opening further south. The two hot spots are connected by a dirt road, with the border wall on one side and the other lined with date palm trees and canals that water bright fields of lettuce, grasses and other crops.

Migrants who piled into vans for a short stay in a Border Patrol tent include many from countries who don’t enjoy visa-free travel and travel surreptitiously over land to reach the border. Cubans often start in Nicaragua, the closest country to the US that they can fly to.

See also  UFC 270: Ciryl Gane insists 'I know what it's like to lose' as Francis Ngannou waits

Haitians are worse off. Love Bre, who came by bus and on foot from Chile, made the mistake of allowing a Mexican man to guide him, his wife and daughter down a hill to the concrete path across the dam to Yuma.

“He even took my watch,” said Bre, 35, holding up his wrist as he entered the Somerton warehouse for a COVID-19 test and bus ride to the Phoenix airport. The bandit also took $180.

US authorities have released about 15,000 migrants to the Regional Center for Border Health since last February, said Amanda Aguirre, chief executive of the health-care provider. About nine of 10 are quickly on a bus to the Phoenix airport, with others taken to shelters.

It’s too soon to say if travel restrictions will stop Venezuelans and may depend on how easily Mexico issues visas.

The US doesn’t even recognize the Maduro government in Venezuela, making flights nearly impossible. Last month, the US began flying Venezuelans to Colombia without an opportunity to claim asylum and said it would do so “on a regular basis.”

Karla Macaveo, 28, arrived in Mexico City from Venezuela six days before the visa requirement took effect. She flew to Mexicali, took a taxi to the Yuma border crossing and planned to fly to Delaware. It couldn’t compare to having to travel over land.

“This was so much easier,” she said with a smile, as she waited to board one of four charter buses going to the Phoenix airport that day.

Associated Press writer Christopher Sherman in Mexico City contributed, along with Gisela Perez de Acha, lecturer at the University of California, Berkeley Graduate School of Journalism, through a partnership with the AP.