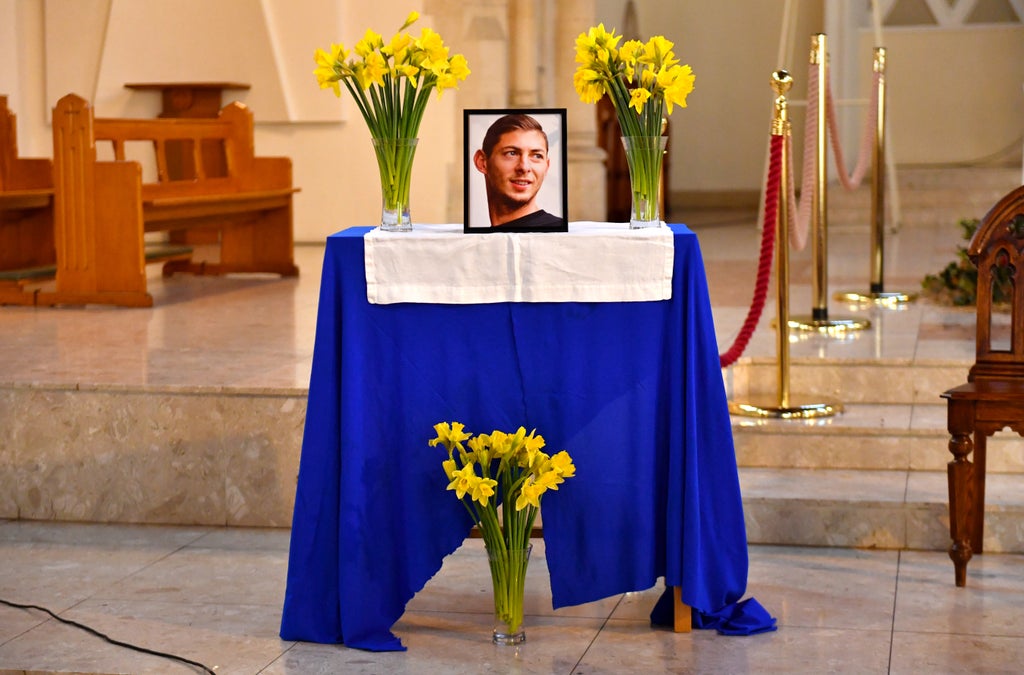 Top footballer Emiliano Sala felt pressed into completing a multimillion-pound transfer to the Premier League before he died in a plane crash shortly as headed to his new club, an inquest has heard.

The Argentina-born striker was joining then Premier League club Cardiff City in a £15 million transfer from French Ligue 1 side Nantes.

Dorset Coroner’s Court heard that the 28-year-old was on board a private plane flying from Nantes to Cardiff on the evening of January 21 2019 when in crashed in the English Channel, close to Guernsey.

Pilot David Ibbotson, 59, was also killed but his body has never been found.

On the first day of the inquest into the footballer’s death, his mother, Mercedes Taffarel, told the court her son’s dream since childhood in Argentina had been to be a professional footballer.

In a written statement, Mrs Taffarel, who referred to her son as Emi, said his goal-scoring exploits in France had led to calls for him to be called up to Argentina’s national team.

“I appreciated the Nantes club and the fans very much,” she said.

“An offer came from Cardiff City in December 2018.

“It is true to say that Emi was very happy when he eventually accepted the idea of ​​the move as he had the chance to play in the Premier League.

“He felt it was the right time to move clubs and to another league.

“It seemed to him that the Nantes management was also pushing his exit from the club because they were going through some financial problems.

“Emi’s transfer was the most expensive in the history of the club and that also helped to push forward his transfer, even though the team coach didn’t want him to leave the club.

“Cardiff put on a lot of pressure on him to complete the sale quickly, but Nantes asked for more money and Emi felt in the middle of the dispute.

“Emi was in some doubt to go ahead with the move. Finally, the sale was agreed, not because of his performances by him as a player at Nantes, which were very good, but because Nantes needed the money.

“Against the wishes of the coaching staff and the fans, Emi was sold to Cardiff, and he felt he was achieving his dream.

“After many years of effort, he had finally reached one of the most important leagues in the world, which he has always desired to play.”

Mrs Taffarel said she spoke to her son regularly and, when she did not hear from him on the day of the flight, she assumed he had gone to bed early after arriving in Wales.

The following day she learned that the plane carrying her son was missing.

Eventually her family organized their own sea search and the plane was located with Sala’s body inside.

“We had hope and it all ended in pain and the pain continues to this day,” she said.

“Emi was very young, with his whole life ahead of him with plans for the future, and he wanted to continue learning about football in a league as important as the Premier League.”

She added: “Our lives changed forever on January 21 2019 and now none of us is the same.

“No-one can bring Emi back to us, but we ask for justice so that Emi can rest in peace and give us a little bit of peace of mind knowing that we did everything we could so similar deaths are prevented in the future.

“Our pain will never go away and we carry it with us all the time. All we ask for is justice and we want no stone unturned to find out what happened.”

The inquest heard that Sala had been spotted by a scout while playing in Argentina and was signed by an academy linked to top French club FC Girondins de Bordeaux.

After moving to France he signed his first professional contract with Bordeaux, before having several spells on loan with other clubs.

In July 2015 he joined Ligue 1 club Nantes and in December 2018 his goal-scoring exploits caught the attention of Cardiff City, who at the time were struggling in the Premier League.

Senior Dorset Coroner Rachael Griffin told the inquest jury the Piper Malibu aircraft had left Nantes airport at 7.15pm on January 21 for the flight to Cardiff but radar contact was lost near Guernsey at 8.15pm.

She said the plane was located on the seabed on February 3 and Sala’s body was found in the wreckage three days later.

Ms Griffin said the inquest will hear a range of evidence from witnesses but the key questions for consideration will be the arrangements of the flight, the condition of the aircraft and the cause of the crash.

The inquest, which is taking place at the Town Hall in Bournemouth, is due to last around five weeks.