Like every September 11, Catalonia celebrates the Day of the Diada. However, it will not be just another Diada, with pro-independence leaders in prison or in exile.

The day started at the edge of 09:00, with the traditional wreath to the monument to Rafael Casanova Barcelona, ​​where institutional and political representatives of Catalonia have paraded, starting with the president of the Generalitat, Quim Torra, and his Government.

In statements to the media after the offering to the monument of Rafael Casanova, the president of the Parliament, Roger Torrent, has claimed that the Diada is “a party for everyone, in which everyone can express themselves freely.” In addition, she has had a memory for her predecessor, Carme Forcadell, an inmate in the Mas d’Enric prison (Tarragona). Torrent considers that he is in jail in an “unfair” situation.

The focus of attention will be in the afternoon in the Diagonal avenue of Barcelona, during which the Assemblea Nacional Catalana (ANC) has convened this year its manifestation, under the motto “Fem la republica catalana” (“Let’s make the Catalan Republic”), to demand that independence be made effective and that prisoners and exiles can return to their homes.

According to the organizers’ plans, at 5:14 p.m. The entire Diagonal must be silent and, at one end, in Plaça de les Glòries, a rocket will be launched that will serve as a knock to start a sound wave. The protesters will make their voices heard in a common cry that will progressively advance along the Diagonal until reaching the Pedralbes Palace, where the clamor will symbolically tear down a wall, referring to the “obstacles” to make the Catalan republic effective, according to the ANC .

The organizers have explained that they have already subscribed more than 460,000 people —All the sections into which the mobilization is divided are full.

We did it! All sections of the Day for the Catalan Republic are FULL! More than 460,000 registered!
Can you still register via Call Center until 8 p.m.
¿¿ 936559857
Let’s open Row 0 for those who can’t be there!
¿https://t.co/LLoPrsBl4U # FemLaRepúblicaCatalana¿ pic.twitter.com/DNnwqfbtSl

Ciudadanos, PP, and this year for the first time, the PSC have excluded themselves from the events of the Diada, claiming that they have not organized with all Catalans in mind.

A delegation from PNV and EH Bildu, led by Andoni Ortuzar and Arnaldo Otegi, participate in the Diada events

PNV and EH Bildu have participated this morning in the floral offering to the Rafael Casanova monument for the Diada. 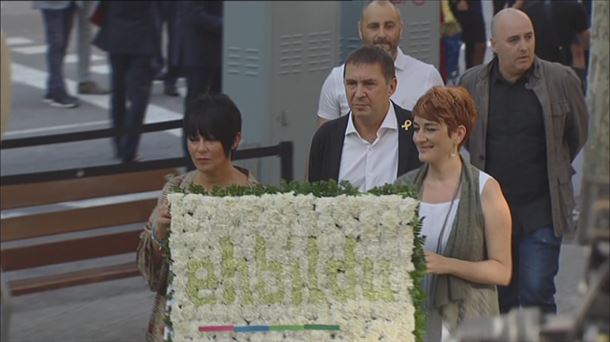 By eh Bildu, Arnaldo Otegi and the parliamentarians Maddalen Iriarte and Bakartxo Ruiz have traveled to the city of Barcelona. Arnaldo Otegi went yesterday, Monday, to the Lledoners prison (Barcelona) to visit the imprisoned Catalan politicians and convey his “absolute solidarity in political and human terms.” In addition, they will take advantage of their stay in Catalonia to hold meetings with various Catalan institutional and political representatives. 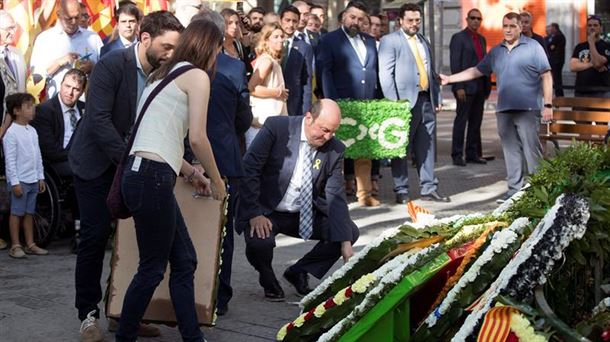 Andoni Ortuzar heads the delegation of the PNV who participates in Catalonia in the events on the occasion of the Diada, invited by the Generalitat and the PDeCAT. In statements after the wreath at the Rafael Casanova monument, he regretted that there are sovereign leaders in jail and abroad, and has defended dialogue and “politics with capital letters.” Likewise, it has recommended to the authorities of Catalonia and to the sovereignist parties that they dialogue even if the prisoners are not released, since it defends to always dialogue, without posing prerequisites and even “in the worst conditions.” Andoni Ortuzar will visit the former Catalan councilors Josep Rull, Jordi Turull and Joaquim Forn this Tuesday in the Lledoners prison.

Borrell Says He Would Prefer Imprisoned Politicians To Be Free

The Minister of Foreign Affairs, EU and Cooperation, Josep Borrell, has stated that “personally” he would prefer that the imprisoned pro-independence politicians, who will be tried for sedition and rebellion, be “conditionally free”, because he considers that “there are other ways of ensuring because they don’t run away. “

In an interview broadcast by the BBC Borrell has remarked that this is his “personal opinion” and, when asked why the Government does not forgive the accused, he has responded, visibly annoyed, that “in Spain there is a division of powers.” “Have you heard of the division of powers?” the minister has said, emphasizing that “Justice is independent” and that the judicial process against the independentists is the work of a judge, and “the Government has nothing to do with it.”

Borrell has not hesitated to qualify Catalonia as a “nation”, and not as a “region”, but has emphasized that “in International Law there is nothing that gives Catalonia a right to secession”. “Although Quim Torra says it every day, it is perfectly false,” he added.

Rivera replies that the “only dialogue” is in democracy

The president of Ciudadanos, Albert Rivera, replied today to the independentists that the “only possible dialogue” is within democracy and legality, and has warned the President of the Spanish Government, Pedro Sánchez, not to “be wrong” of allies and adversaries.

Ciudadanos has held its own act on the occasion of the Day of September 11 under the slogan “Love is stronger than hate”, in which, in addition to Rivera, the leader of Cs in Catalonia and national spokesperson, Inés Arrimadas, deputies in the Parliament and councilors in the Barcelona City Council.

In his speech during the ceremony, Rivera has issued this warning in a Day in which the independentists have claimed the freedom of sovereign leaders in prison and abroad and have made repeated appeals to dialogue with the Sánchez Government.