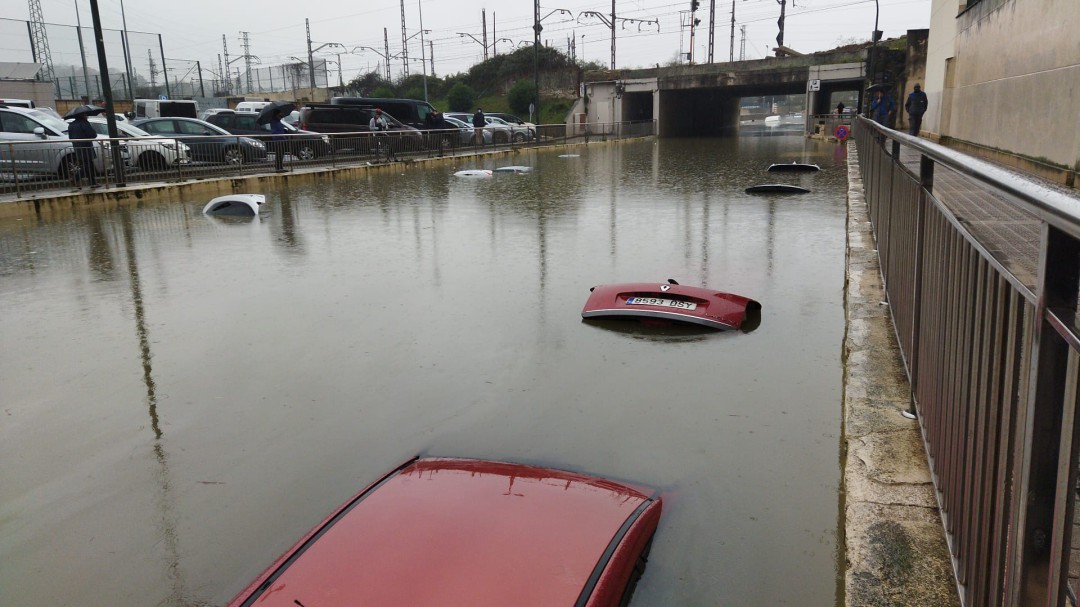 Bizkaia is taking the worst part of the rainy season, with accumulated over 150 liters during the weekend, and 2 indicated basins: the Cadagua, and the Nervión-Ibaizabal.

Sodupe and Balmaseda have suffered overflows

Precisely also about the situation in these basins, words in this antenna from Ibone Elorriaga, Emergency Technician of the Basque Government

Some premises have been flooded in Bengo-etxe, in Galdakao, and in Ariz, in Basauri. Material damage has just been explained to us by its mayor, Asier Iragorri

Arrankudiaga also dawns with the river out of its channel, and complications also in Retuerto, in Barakaldo, for example the Regato school has decided to suspend its classes. In Bilbao, overflows in Zorroza and Olabeaga, night with several interventions by firefighters.

And there are some other conditions, such as power outages that affect the areas of Indautxu and Basurto, among others in streets such as Ercilla, Iparragirre or Sabino Arana. At 11 o’clock the Crisis Table of the Basque Government meets again in Txurdinaga. In the case of Bilbao, there will be an update of data at 10 am by the director of Civil Protection and firefighters

See also  How to reconcile work and pets | Fortune

RENFE is offering a bus service between Muskiz and Brakaldo due to a landslide that has forced the service to be cut off. There are also problems between Bilbao and Blamaseda, which are standing still in the hope of being able to offer an alternative by road.

With a large number of incidents. The BI3651 Güeñes is cut due to the Kadagua overflow, the BI625 in Arrankudiaga also cut in the access to the link branch to the AP68 and in the Otxanduri neighborhood due to a landslide

Same situation in the Bakiola neighborhood due to a large pool of water, which occupies two directions

The N-634 in Muskiz is also completely closed due to the overflow of the Kotorrio river, the parking lot of the sports center is also closed

In Muskiz the BI2701 was also cut due to a detachment

The N240 is cut off at Zeanuri in the upper Barazar, due to the overflow of a nearby stream. Traffic is being diverted by the N622 and the AP1. The port of Orduña is also closed

And closed the Corridor of the Kadagua BI636, in Bilbao, landslide ..

The regional executive yesterday decreed the alert phase of the special plan against the risk of floods and today it has decided to raise the level to emergency from 3:00 p.m.

The accumulation of rains together with the planned thaw has led the Basque Government to decide to activate the special plan for the risk of floods in the emergency phase at 3:00 p.m. and that at 7:00 p.m. the advisory council is convened in Bilbao to adopt concrete measures and contact the municipalities with the highest risk.

To analyze the evolution of the situation, the Vice-Lehendakari and Security Minister, Josu Erkoreka, has been this afternoon with the Minister of Economic Development, Sustainability and Environment, Arantxa Tapia, at the facilities of the Basque Water Agency, URA, in Vitoria.

After the meeting, Erkoreka explained that the “intense” and “persistent” rains that are expected in the next few hours, together with the thaw, can “generate difficult situations in some basins” and cause “problems” until the early hours of this afternoon. Monday.

The head of Security has specified that measures have already been adopted in all basins and that surveillance resources are activated and willing to intervene when necessary depending on the evolution of the water level.

Erkoreka has asked the public to carefully follow the information and recommendations that are given in relation to the situation of the roads and river beds, and has warned that the worst is expected for the early hours of today and Monday morning.

Check here the situation of the ports

“The worst of the alert has passed”

The head of Euskalmet, José Antonio Aranda, has considered that “the worst of the orange alert” has happened after a night with more than 400 incidents opened by SOS Deiak.

The Basque Weather Agency, Euskalmet, foresees for this Monday in the Basque Country a day in which the copious rains will continue, although from the afternoon they will begin to ease.

The snow will cease to be the protagonist, the level will be above 1,100 meters and it will rise for the night. However, a new front will affect the territory and it will continue to rain, especially during the first half of the day and especially in parts of the west. The wind will blow from the northwest somewhat calmer and temperatures will rise, with the rise being more noticeable in inland areas.