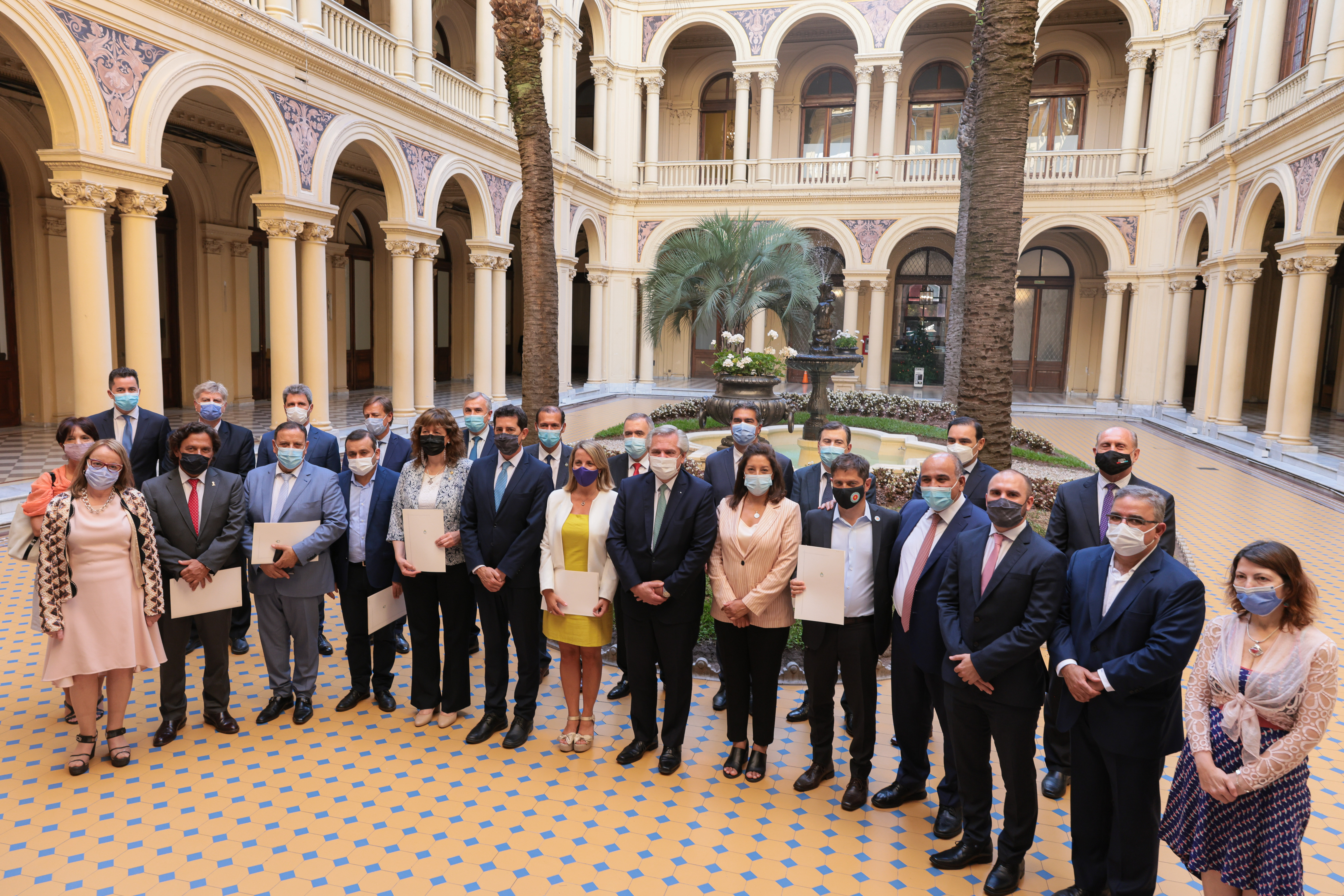 The Government of Alberto Fernández has signed this Monday with the Argentine provinces a tax agreement that allows the creation of new taxes. The pact is a ball of oxygen for regions in need of extra funds, corseted since the last agreement, signed in 2017 by former President Mauricio Macri, prompted them to reduce the tax burden on companies and individuals. The photo of Fernández in the Casa Rosada with the 23 governors of the country, government officials and opponents, was also a message to the International Monetary Fund (IMF). Argentina is currently negotiating a new payment schedule with the multilateral and needed to send Washington an image of unity.

“This agreement serves us a lot in the discussion we have with the Fund because it shows us a country that projects the future in rational fiscal terms and with the consensus of all provincial governments,” said Fernández at the time of signing. It has been a political gesture, but also a necessity in the face of scarcity. Two weeks ago, the opposition vetoed the 2022 Budget law drafted by the Executive in Congress. It was a bucket of ice water that no one expected. At the same time, the Government ran out of letters to show the IMF negotiators and the provinces without the national funds that the norm allocated to infrastructure works in their territories.

The governors will now be able to make up that shortfall, of 1.2 trillion pesos (11,000 million dollars) with a new inheritance tax, which in Argentina is only paid in the province of Buenos Aires, and an increase in the income tax. gross. The pact also ties spending to GDP growth, instead of inflation, as agreed in 2017, during the Macri government.

The governors of the opposition have already announced that they will not raise taxes, but they agreed to sign the agreement because the letter enables but does not oblige. The only thing missing was the head of the Buenos Aires government, the opposition leader Horacio Rodríguez Larreta, who was confronted with the Casa Rosada in court over Fernández’s decision to withdraw the funds he had received during the Macri government to finance the transfer of the police. “They want to force all Argentines who live in the city to renounce the right to claim the funds that were unconstitutionally taken from us,” said Rodríguez Larreta.

A tax increase is always a sensitive issue. The Argentine Industrial Union (UIA) said in a harsh statement that the new tax agreement “generates enormous concern because it increases the tax burden in the productive sector by eliminating the progressive reduction in gross income originally established in 2017.” That pact had been thought of as a way to adjust spending in the provinces in exchange for money coming from the central government. But the economic recession, inflation and the rise in the primary deficit (before paying interest on the foreign debt) dynamited the possibility of reducing tax revenues. The Government will now bring the pact to the IMF. Without a budget law, he will be able to at least exhibit a document that speaks of a consensus with the territorial leaders of the opposition.

See also  Mum called 'monkey' and son, 15, 'told he was a slave' in sickening racist abuse