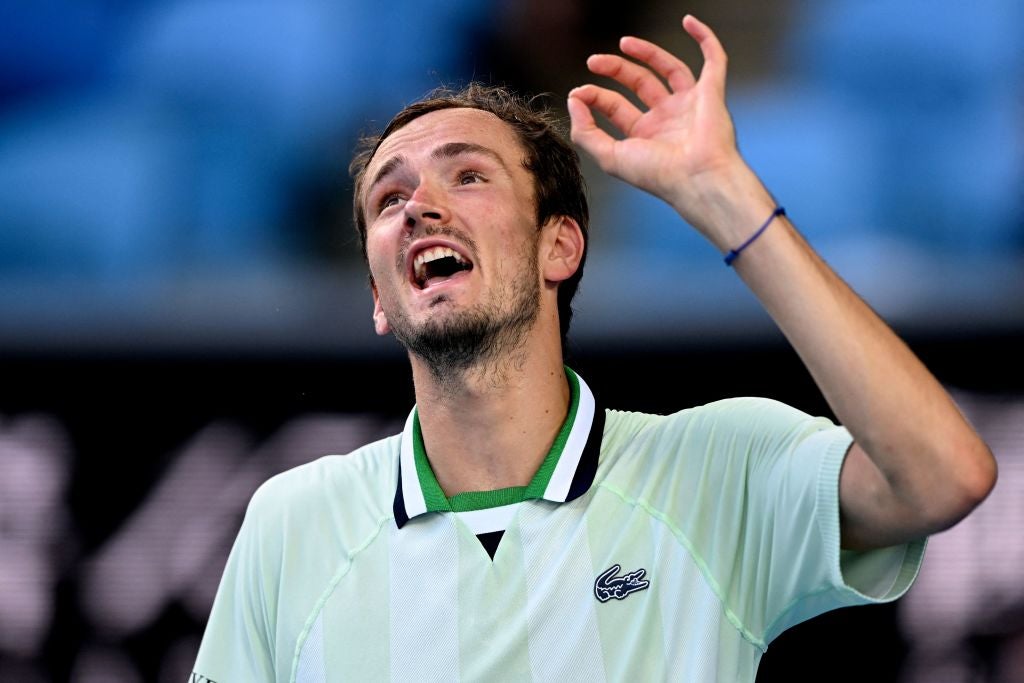 The Australian Open continues on Wednesday with a host of quarter-final ties, as some of the world’s top players compete to land the first Grand Slam of the year.

In the men’s quarter-final, it’s the No2 seed Daniil Medvedev who is in action next as he faces Canadian Felix Auger-Aliassime, with the Russian having had to apologize for his comments during the match with Maxime Cressy. During that encounter he shouted “this is so boring”, though later he acknowledged he had misdirected his annoyance toward his opponent. Medvedev is aiming to reach his second successive Australian Open final, after he went the distance last year before losing Novak Djokovic in the showpiece match. With the Serbian world No1 absent this time, Medvedev is aiming to add a second Grand Slam to his record, having won the 2021 US Open.

Earlier in the men’s singles, Stefanos Tsitsipas booked his place in the semi-finals with a win over Jannik Sinner, the young Italian who defeated Tsitsipas at the 2020 Rome Masters. In the women’s singles, Iga Swiatek beat Kaia Kanepi and American Danielle Collins beat unseeded French opponent Alize Cornet, who had reached a first Grand Slam quarter-final of her career. Follow all the action from the Australian Open:

Novak Djokovic is set to return to action at next month’s ATP Tour event in Dubai.

The world number one is on the entry list for the Dubai Duty Free Tennis Championships, which begin on February 21.

It is set to be Djokovic’s first appearance since his deportation from Australia ahead of the australian Open earlier this month.

The 34-year-old has not spoken publicly since returning to Serbia but has been photographed on a trip to Montenegro.

Entrants to Dubai do not need to be vaccinated against Covid-19 and it is a tournament Djokovic has often played in the past, with the 34-year-old winning the title five times.

See also  Why is there a fuel shortage? What's causing the latest diesel supply issues at UK petrol stations

Djokovic is likely to find his playing options severely limited if he remains unvaccinated, and will probably be unable to play at the big events in Indian Wells and Miami in March.

French Open winner Iga Swiatek managed to temper her frustrations and rally from a set and a break down in brutal heat to overpower Estonian Kaia Kanepi 4-6 7-6(2) 6-3 on Wednesday to reach her first Australian Open semi-final .

In their first career meeting, Swiatek wasted breakpoint chances in each of Kanepi’s first three service games and it was the Estonian who converted her first chance in the seventh game to nose ahead.

Swiatek saved four setpoints in the ninth game that lasted 16 minutes but could not stop Kanepi from taking the opener on her ninth opportunity after another lengthy game.

“In the first set I had so many breakpoints, I felt like I missed my chances because she broke me on her first breakpoint,” Swiatek said on court.

“I was pretty annoyed. That was a mistake because I should have been focused on the future, on the next ball.”

Kanepi, 36, appeared set to progress beyond the last eight at a Grand Slam for the first time when she broke early in the second, with a frustrated Swiatek slapping herself and slamming her racquet on court.

The Estonian did most of the damage with her powerful double-handed backhand, leaving Swiatek rooted to the spot and watching helplessly as the winners screamed past.

But the 2020 Roland Garros champion, who committed 12 double faults in the match, regained her composure and raised her level in a second set tiebreaker to level the contest at 1-1.

See also  RNE on the border with Ukraine

Swiatek suffered two more breaks in the decider but managed to break 115th-ranked Kanepi four times, sealing the three-hour contest on her second match point when the Estonian sent a backhand wide for her 62nd unforced error.

“I’m really glad that I have my voice because I was shouting so loud,” Swiatek said.

“This match was crazy and without the energy in the stadium, I think it would’ve been really hard to win it.”

Order of play on the main showcourts on the 11th day of the Australian Open on Thursday (play begins at 0000 GMT; prefix number denotes seeding; all matches semi-finals):

Cornet looking ahead to ‘exciting’ season after Australian Open run

Surprise Australian Open quarter-finalist Alize Cornet said she was still learning the game at the age of 32 and her sparkling run at the year’s first Grand Slam had filled her with fresh hope for the season.

The unseeded Frenchwoman punched above her weight in this year’s tournament to reach the last eight of a major for the first time on her 63rd attempt, before losing 7-5 6-1 to American Danielle Collins on Wednesday.

“The first thought that comes to my mind right now is that I have eternal respect for the Grand Slam winner because it’s such a long way,” Cornet told reporters. “My God, I have the feeling I’m playing this tournament for a year.

“I’m so exhausted mentally, physically. When you go all the way and win these seven matches, it’s just huge. I respected the Grand Slam winner before, but now even more because I only did half of the way, a little bit more than half.

See also  When is The Book of Boba Fett season finale and how many episodes are there?

“It seemed to me like, ‘oh my God, you need to be so strong on every aspect to go to the end’. That was a great experience for me to learn that. Even though I’m 32, I’m still learning, apparently.”

Cornet, who is 61st in the rankings, had suggested after beating Garbine Muguruza in the second round that 2022 could be her final year on the WTA Tour.

But she said on Wednesday that the last two weeks, during which she beat two-times Grand Slam champion Simona Halep in the previous round, had changed her outlook.

“It showed me… that I’m maybe tougher than what I thought, I can beat many good players in a row even in a slam,” she said.

“I should keep believing and keep working. Maybe an exciting season is ahead of me. That’s what I’m telling myself.”

Stefanos Tsitsipas into semi-finals after scintillating performance against Jannik Sinner

Stefanos Tsitsipas will be hoping it is third time lucky in an Australian Open semi-final following his scintillating performance against Jannik Sinner in the last eight on Wednesday.

Stretched to five sets by Taylor Fritz on Monday, the fourth seed showed no signs of fatigue in a match that started in blazing sunshine but finished under the roof after a storm hit.

The 23-year-old will play the winner of the quarter-final between Russian Daniil Medvedev and Canadian Felix Auger-Aliassime later on Wednesday.