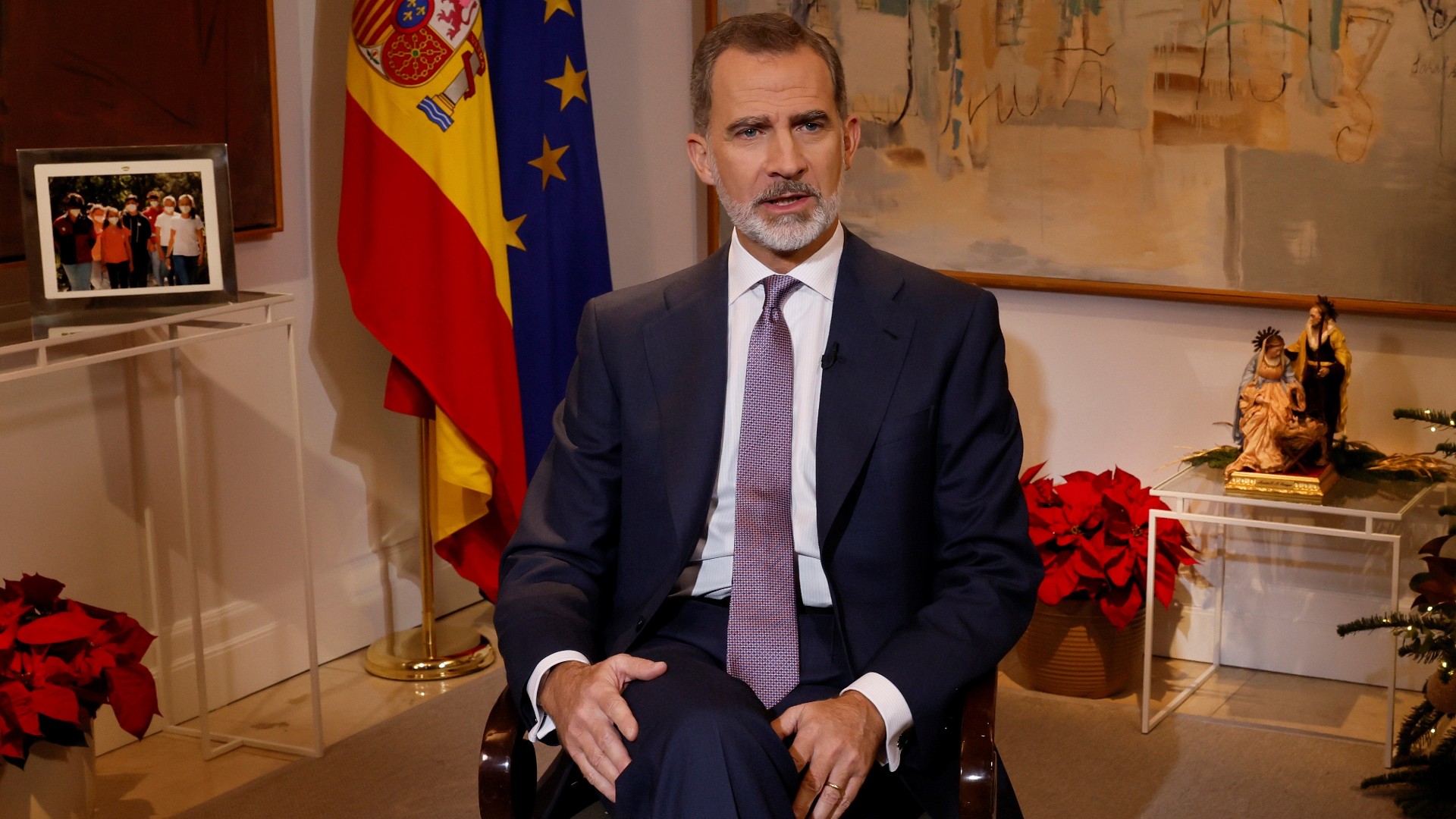 King Felipe VI has urged all institutions to be “example of public and moral integrity“and” respect and comply with the laws “always having as a guide” the general interests “of the citizens, together with their” concerns, concerns and problems. “” We must be in the place that constitutionally corresponds to us and assume, each one, the obligations that we have entrusted“, said the monarch in the traditional message of Christmas Eve – the eighth in his reign – in which the pandemic has once again occupied an essential place with a clear call to the “individual and collective responsibility” to “not take steps back” in this health crisis “that has caused so much suffering.”

Felipe VI has once again put the emphasis, as he did last year, on the importance of the exemplary nature of the institutions from which he has also asked for “understanding and collaboration” and has once again appealed to the “spirit” of the Constitution in the middle of a growing political tension: “Summons us to unity in the face of division, to dialogue and not to confrontation, to respect in the face of resentment, to the integrating spirit in the face of exclusion; It permanently summons us to a civic, serene and free coexistence “.

The king has made no reference in his speech to his father, King Juan Carlos I, who for the second year in a row spends Christmas in Abu Dhabi with constant rumors about his return to Spain, encouraged by reports that suggest that the Prosecutor’s Office The Supreme Court plans to close its proceedings in the coming weeks without opening a criminal case, together with the file by the Swiss Prosecutor’s Office of the investigation initiated around a 100 million donation by Saudi Arabia to the King Emeritus, a commission of which the King I would have made a subsequent donation of € 65 million to Corinna Larsen in 2012, when he was still head of state.

In the 2020 speech he did not make a direct mention of the emeritus king, although he appealed to the “moral and ethical principles that bind everyone, without exceptions” and that “are above any consideration, of whatever nature, even the personal and family “, in a clear reference to Juan Carlos I.

See also  El Nacimiento: They won in the raffle for the presidential plane, now an armed group wants to collect it

This year’s has been a speech, therefore, focused on highlighting the role of institutions at the service of citizens, vindicate the Constitution – “main beam of progress in Spain”– and send a message to the Spanish not to be discouraged in a second Christmas marked by the pandemic with the soaring incidence that has forced new restrictions. A message that has started with a special mention to the inhabitants of La Palma, to whom he has said that they have the “commitment” of all administrations to rebuild as soon as possible their lives, their economy and “their projects with enthusiasm”. He has sent them a message of encouragement, and has shown his solidarity in the face of a situation that has lasted for three months, “so painful and difficult” that it has left many palm trees “homeless and without a means of life.”

It was a speech of just over 13 minutes recorded in the Palacio de la Zarzuela in the room next to the Audience Hall and where the king was seen next to the flags of Spain and the European Union, as well as a photograph of the princess of Asturias and the infanta Sofía in their first act alone without the presence of the kings along with other images of different moments in the life of the Royal Family. In the room where the king offered his message to the Spanish, the chosen setting had elements similar to those of other years: a Christmas tree, a nativity scene and two books: Spanish Constitutions, BOE edition; Y National Library of Spain, 300 years making history, as well as two contemporary art paintings from the Sarah Grilo and Albert Ràfols-Casamada National Heritage collection.

“We are seeing that the virus has the ability to harm us in many ways. It is transmitted again very quickly and, therefore, the risk has not disappeared. On the contrary. Therefore, we must continue to be careful, protect ourselves and act with the greatest individual and collective responsibility. We all have to do everything possible not to take steps back in this health crisis that has caused so much suffering and whose victims we remember at this time, “he stressed.

In the midst of a sixth wave that is taking the incidence of coronavirus to daily records and that already keeps hospitals at very high risk, the king wanted to send a message of encouragement: “A year later – and always with all the necessary caution – the situation is different”. And, in his opinion, “the discovery and authorization of vaccines” and the “large number of Spaniards who have been vaccinated” have made it different, as well as the vaccination process itself “of which we can feel especially satisfied.” He once again wanted to thank the work of the health personnel: “We thank them immensely, with all our support and encouragement.”

The king has not only referred to the health crisis derived from the pandemic but to its “social, economic and also emotional” consequences. It has thus valued that “the economy has grown again and has recovered the vast majority of jobs that had been temporarily suspended” and lhe number of employed persons, he said, “evolves at a really positive rate”. But it has alerted the increase in the number of people in vulnerable situations. “Today there is concern in many households about the rise in prices, the cost of energy or the difficulties in finding a stable job, especially for young people.”

Faced with “such complicated times that we live” and that “force us to remain on alert in a scenario of uncertainties and contrasts”, the king has raised a question: what to do, we must fall into conformism, waiting for the problems to be resolved by themselves? To answer: “I think not. We must react, We must understand and assume the new transformations that we are experiencing so rapidly, take the initiative and try to stay ahead of events; we must adapt to the changes being clear about our great objectives and priorities as a country “.

In this sense, the king has raised the need for a society “advanced economically and socially”, with “stable and decent employment” and a “solid welfare state”. Too a society that “continues to promote equality between men and women” and that it is “at the forefront of technology, innovation, at the forefront of climate change and committed to the sustainability of the planet and its environmental balance”.

It vindicates the Constitution: “It has sustained our coexistence in the face of crises”

King Felipe VI has taken advantage of his message to emphasize that “the profound change in Spain in these more than four decades of democracy and freedom has been extraordinary” and has been based “on the efforts of millions of Spaniards”, in addition to the “sense of history “and the” great deals “in a transformation project that symbolizes the Spanish Constitution. “It has been and is the main beam that has favored our progress, the one that has sustained our democratic coexistence in the face of serious and serious crises of different nature that we have experienced, and therefore deserves respect, recognition and loyalty. “

And after joining the progress of Spain to that of a European Union, reinforced – he said – for its fight against the pandemic by assuming “very important and unprecedented commitments in health, economy and employment,” he highlighted the “opportunity” that European funds suppose in the modernization of the country and its companies and in the promotion of a “necessarily more digital, greener and more inclusive economy“.

“Spaniards have known how to react and overcome adversity“

“The moment is difficult, of course, but to stop today is to fall behind, it is to go back. We have to move on because history teaches us that Spaniards have known how to react and overcome adversity. Now a future is opening before us that requires responsibility, a willingness to collaborate and understand each other; and needs- that future- that We trust more in our own strength as a Nation“This was the final message at the close of his speech, to which he added:” With determination, drive and character, we will achieve it. ”