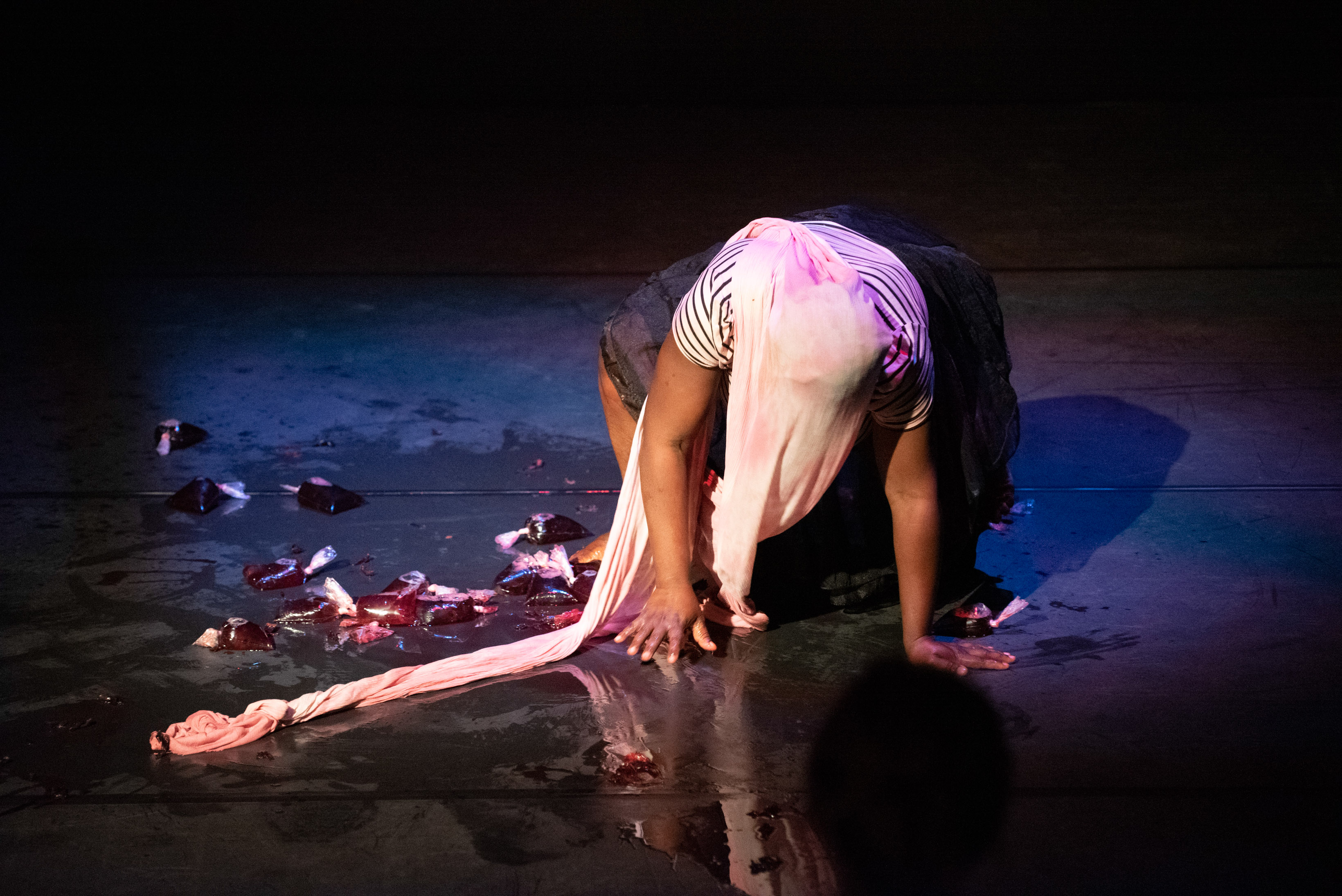 In the 1960s, during the great wave of decolonization in Africa, the Senegalese philosopher Léopold Sédar Senghor, who would also be the first president of independent Senegal, defined rhythm as “the architecture of being”. From this perspective, body language became a key source of communication and vindication and with it, of social transformation. This is how Fatoumata Bagayoko understands her profession, dance. Graduated in 2007 from the National Institute of Arts in Bamako, capital of Mali, and trained in some of the most prestigious centers on the continent, such as the École des Sables, founded by the winner of the Golden Lion at the Dance Biennial. from Venice, Germaine Acogny, Bagayoko presents a project and career focused on women.

The 32-year-old Malian choreographer and dancer participated in the last Festival of the South – Three Continents Theater Encounter, held at the end of October, which unites, through the performing arts, Europe, Africa and the Americas, from a space key geographical area, the Canarian municipality of Agüimes. In this event, both multicultural and multidisciplinary, which is committed to social transformation through the arts, capable of engaging different communities and perspectives through theater, dance, and the body in movement, Fatoumata Bagayoko presented Fatou you did everything (Fatou, has hecho de todo).

The piece showed an intersectional gender perspective, faced from their own culture and life experience, and projected outwards, to fight collectively and inclusive for women’s rights. The Nigerian researcher Obioma Nnaemeka has described this approach as “neofeminist”, that is, as a feminism of negotiation, without ego, capable of establishing a dialogue about women taking into account the patriarchy system. A concept that takes into account gender, class, ethnicity and culture, which the researcher considers represents in a more nuanced way the struggle for and for the diversity of African women.

Ask. His latest proposal is Fatou, you did everything, a very personal contemporary dance work on which she has been working for several years now. Could you tell us about some key moments throughout your career?

Answer. I have benefited from different training workshops both in Bamako and abroad. Each one has given me something. I always find something about myself, and I am collecting experiences that help me organize my ideas at a creative level and in interpretation, that is, my presence on stage. And along the way I have met choreographers and colleagues from whom I have learned a lot; of his way of being on stage.

P. And if you had to establish a point of origin, what would it be?

R. I would say that my career as a dance professional began in Ouagadougou, at the Bobo-Dioulasso Cultural Center, in the framework of a competition [Africa Simply the Best / África, sencillamente la mejor], organized every two years by Serge Aimé Coulibaly. It was there that I first found myself competing with so many West African artists. I was a finalist and that meant that I was on the right track, that the message had arrived. For me, what I do is awareness, so the response of the public is crucial. I show my own experience, what both I and other people have lived. Hence the importance of finding that complicity with the public. That is what really counts.

For me, what I do is awareness, so public response is crucial

P. In Fatou, you did everything highlights the body representation of pain. It is striking that it begins with silence, turning its back to the public, a body that collapses but always has the ability to get up again, find calm and turn towards the public …

R. I discovered the importance of the back by seeing how Germaine Acogny moved her body, when in 2018 I did a three-month stay at the School of Sands… Because everything usually goes through the facade, but the back is also a messenger of experiences. When I turn my back on the public at first, I am hinting at both my ancestors and the present. That is, I turn to tradition to locate there the problem or issue I want to communicate about. And from there, I project towards the future, exploring that influence of tradition and ancestors in life, and finding tools to produce change.

P. How did the public in the Canary Islands receive it?

R. I think good because everyone has stayed until the end. I think the public liked the show and we were able to speak and share my experiences in a subsequent debate.

P. So, there is usually debate after their performances …

R. Yes almost always. When the show ends, a moment of exchange with the public usually opens.

P. The idea of ​​art to produce change is present in his direction of the project Kene Koura, whose motto is to “dance to change mentality”, with the theme of violence against women. How did the initiative come about?

R. I started working with my neighbors, young girls who lived next door to my father’s house, who have gone through the ablation experience. For culture, it is an ancient question. They are not intended to be a harsh or problematic practice. All the girls in the neighborhood have been there because it is considered normal. So the first thing I did was put them together, work with them, and put together choreographies that revolved around my own experience. From there we went to surrounding towns, to sensitize the population. I started to do it with my own means, because I did not have funding. It was about spreading the message, from my own experience as a survivor of a practice that is considered part of cultural heritage. I did everything possible about myself, first, to sensitize my own family, then those around me and then go to other parts of the country and around the world, little by little, as I have access to financing, and through the audiovisual format … This is how it came about Here Gold.

P. What does it consist of Here Gold?

R. It is a traditional and contemporary dance training aimed at young girls, through which we raise awareness about issues such as ablation; early pregnancy, quite common even in some parts of Africa; early marriages too; rape, and other types of violence that women face. That is the line in which I work, trying to make the shows in open spaces so that they are accessible to everyone. Through our union, we hope that future generations will not have to go through the same things that we do. And now I have also set up another project on house decoration, working with women from three different villages. Is named Siguidabaro, which in bambara means the whispers of the community, which promotes informal conversation with one and the other, the head of the town, women, young people … about the problems of the community and what solutions we can give them. Everyone is involved and that makes it easy for them to understand the important role of art in raising awareness and change.

Through our union, we hope that future generations will not have to go through the same things that we do.

P. In fact, in Mali there is a long history of oral tradition, of forum theater, to deal with sensitive issues. How do you think theater can contribute to dialogue between different generations?

R. When people are told, ‘Stop, don’t do that, it’s not right.’ They tell you that they have heard that before and that you are of the new generation and you have no right to tell them anything, because you don’t know anything. But when you dance, everyone is happy. Dance creates an atmosphere of closeness between you and the audience. The phrases are transformed into gestures that later become movement. After the show we ask the audience what they have seen and understood. And through your response, we go deeper. Have you understood that? And do you think it’s okay? And so little by little, also through images, we explain what our struggle consists of, until the public is able to retain the meaning of what they have seen. In this way, the subject can be discussed openly, thanks to the environment created through the moving body.

See also  Celtic reaction: It was no surprise that O'Riley was joined by story-makers Abada, Kyogo, Carter-Vickers and Maeda, where, to VAR objectors, you are a humble tribute.

P. What changes in acting between dancing in a rural area, for example, or at a festival in Europe? For example, between rural and urban areas or within and outside of Africa. Is it the audience that interprets differently or does the staging also change?

R. The staging is made up of space and lighting. When I perform for the villages, I do it in broad daylight. You don’t need a platform, just the land. That changes a lot, because the albero rises as I dance, and of course, that is not achieved on stage. In the living room you can play much more with the lights. The public also behaves differently. For example, in the villages, they clap every two by three, when they like something; if I pick up some knives, it creates a hubbub, they start talking… They don’t think that if they talk they can deconcentrate. And what I feel is that freedom, and I continue, learning to focus on myself. This changes a bit the way of working in the room and out of the room. Inside, everyone is quiet.

P. What can you tell us about your next project?

R. I will continue to dedicate myself to topics on women’s rights. My new show is called My eyes have turned to tears. The objective is to highlight its value. She is the one who gives life. It is true that she does it with her husband, but she is the one who gives birth and, therefore, the one who makes the world develop. And then what happens is that there are conflicts between the children who are born, who little by little are competing for money, and that leads to wars … In the end, those who go are the innocent and lose their lives. Society does not perceive that the loss of a great man is the result of a great lady, who is left suffering at home and is not considered by society. There are also cases of abuse by rich men of women and when they try to denounce it they only make them dizzy, delay them. The people who do that are children… That is the basic idea of ​​my work.

Wiriko is a cultural association dedicated to the dissemination of contemporary African art and culture. It develops outreach activities through a digital magazine and training through a Virtual Classroom.