By Liam Morgan For Mailonline

ITV were at the center of an embarrassing gaffe during the FA Cup semi-final between Chelsea and Crystal Palace as their coverage briefly cut to the Lion King shortly after Ruben Loftus-Cheek’s opening goal.

Fans were left baffled as the game disappeared from their screens in the 66th minute and was replaced by several seconds of footage from the famous movie, which was being shown on the BBC at the same time as the match at Wembley.

The error cut short footage of Loftus-Cheek’s celebrations after he had put Chelsea 1-0 up. Mason Mount added a second 11 minutes later to seal the Blues’ place in the final against Liverpool.

Viewers reacted with laughter as they mocked ITV for the incident, with one user, @BenPeterson82, joking on Twitter that he had ‘checked VAR and Simba was offside’.

‘Should CFC players now refer to Reuben Loftus-Cheek as the Lion King,’ added @AndyRush5, while @AliCampbell90, wrote: ‘It’s always been traditional to show 15 seconds of the Lion King. Respect the magic of the FA Cup.’

‘We briefly interrupt the football to bring you The Lion King,’ said @SlapstickSally, who also posted a clip from the ITV coverage. ‘That happen to anyone else?’

A few fans opted for a more serious analysis of the gaffe, with @TobyEllisNoakes writing: ‘The three year wait for an RLC goal slightly ruined by the telly jumping to the Lion King.’

ITV said in a statement: ‘We apologize for the very brief transmission issue experienced by viewers watching ITV HD on Freeview in part of the country. The issue was due to technical systems outside of ITV’s immediate control, other broadcasters were also affected. The issue was quickly resolved.’

It was the latest in a long line of howlers from ITV with its football coverage. Back in 2009, the broadcaster infamously missed Dan Gosling’s extra-time winner for Everton against rivals Liverpool after cutting to an advert break. 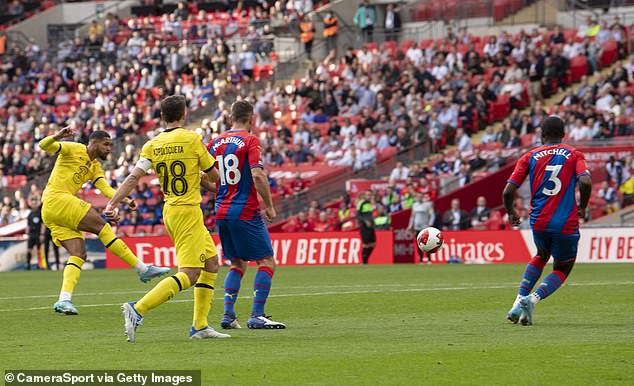 At the World Cup the following year, viewers missed Steven Gerrard’s opening goal for England against the United States because of an ‘interruption’ in the ITV feed.

The victory for Chelsea sent them through to the May 14 final – a repeat of the Carabao Cup final, which Liverpool won on penalties.

Loftus-Cheek broke the deadlock with a fine finish before Mason Mount slotted home a second to kill the game as a contest.