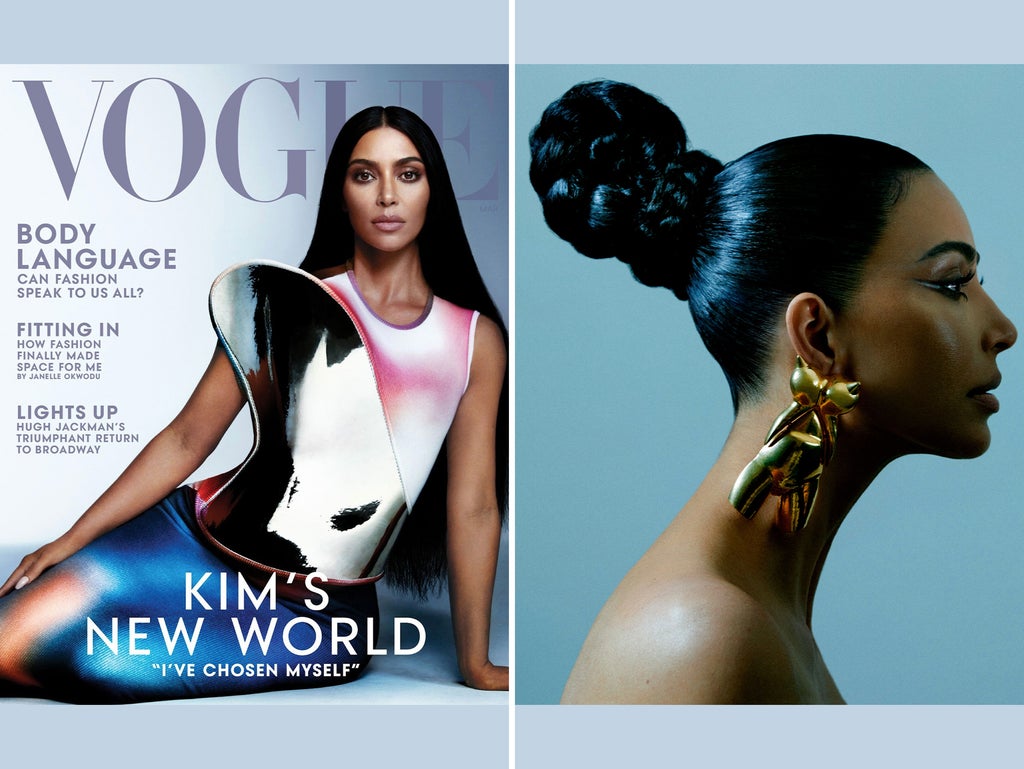 Kim Kardashian’s cover shoot for the latest edition of American Vogue is being criticized by some for cultural appropriation.

On Wednesday 9 February, the fashion magazine revealed that it had profiled the Keeping Up With The Kardashians star and SKIMS founder for its March issue.

While the interview mostly focuses on the beauty mogul’s journey to self-awareness and finding happiness by finally “choosing herself”, social media users have noted a stark similarity between the cover shoot and past images of black women such as Beyoncé, Nina Simone and Naomi Campbell.

One collage shows a famous side portrait of Simone – where her hair has been swept up into a high, cone-shaped bun and decorated with pearls – alongside a side portrait of Kardashian, who is also sporting a dramatic bun.

Campbell wore a Maison Margiela design by John Galliano, while Kardashian was dressed in an organza Maximilian gown from the designer’s spring summer 2022 collection.

The post, which has also been liked by Campbell herself, has received more than 4,000 comments.

Some users criticized American Vogue for appropriating black culture during Black History Month, which takes place in February in the US.

“In the middle of Black History Month, they drop this on us. So *tired* of being told a Kardashian is ‘redefining beauty’ when Black women have been setting beauty and style trends for decades,” one person wrote.

“I don’t understand why she can’t take Armenian culture and give it a spotlight instead of this,” another said of Kardashian’s Armenian heritage.

Others took issue with Kardashian’s comments during the interview, arguing that she failed to credit black women as inspirations for her style and image.

“I don’t get why she couldn’t shout out a single black woman for the impact they’ve had on her own image,” Diet Prada wrote in an Instagram story.

kardashian told fashion that growing up in the nineties, she didn’t see herself in any beauty icons until Salma Hayek and Jennifer Lopez rose to fame.

“Okay, there’s other body shapes out there. There are other looks that people find beautiful,” she recalled.

“My reference for prom was Salma Hayek. I went to the MAC counter and brought pictures of her from her. It was like, I finally have someone to look up to.”

It is not the first time Kardashian has faced backlash for cultural appropriation. In 2019, she announced she had renamed her ella shapewear brand to SKIMS after the original name “Kimono” was criticized.

The kimono, a traditional Japanese garment, is a symbol of the country’s cultural heritage.

“My fans and followers are a huge inspiration to me – I’m always listening to their feedback and opinions, and am so grateful they shared their ideas for a new brand name,” she said at the time.

“After much thought and consideration, I’m excited to announce the launch of SKIMS Solutionwear.”

The Independent have contacted American Vogue and Kim Kardashian for comment.