When Vladimir Putin’s forces invaded Ukraine in February, Maxim and Olga made the difficult decision to leave their life in Kyiv with their five children and both their mothers – they arrived in the UK on May 11

A family-of-nine that fled the war in Ukraine and sought refuge in the UK face being kicked out on the streets after just a month.

When Vladimir Putin’s forces invaded Ukraine in February, Maxim and Olga Hyryk made the difficult decision to leave their lives in Kyiv with their five children and both their mothers.

The couple faced an arduous journey from the Ukrainian capital to a refugee camp on the Ukraine-Poland border before making it to the UK.

They traveled with their two sets of twins Maxim and David, seven, Amiran and Tamerlan, two, one-year-old daughter Nikol, and both of their grandmothers Anna, 70, and Olena, 60.

Olga with their one-year-old Nikol
(

Amiran has autism and Anna had dementia, and both require round-the-clock care.

The family found a place to stay through the UK Homes for Ukrainians scheme- which pays host families £350 per month as a ‘thank you’ payment.

But Maxim told the Mirror of his devastation when he says he received a letter from the host family, allegedly saying they need to be out of the property in Fareham, Hampshire by July 15.

They have started a JustGiving page to raise funds so they do not end up on the streets, and because they do not have any credit history in the UK they need to provide six months’ rent in advance as well as a deposit.

Maxim told the Mirror: “We can’t understand how people can be this way and just refuse us. We are from Kyiv, how can they do this with us when we are not strong.

“It was a difficult decision to move to the UK and not to Poland. Poland is near Kyiv and you feel at home.

“The UK is a good country, but it is very far from home. It was a big responsibility for me to make this choice.”

Twins Amiran and Tamerlan are due to start nursery soon
(

Maxim’s family spent nine days traveling through Ukraine to get to the Polish border, dodging air strikes along the way.

They then spent time in temporary housing near the border in Baligrod before arriving in the UK on May 11.

The family arrived in the UK with no money, and are grateful for the generosity they have been shown since arriving.

Maxim said: “We have met so many good people here who have tried to help us but it’s not the best time for everybody because prices of things are going up.

“We are not strong right now because when we came here we didn’t have any money.”

He says that after receiving a letter from the host family’s solicitor the family are allegedly avoiding him.

Maxim said: “They stopped speaking to us and everybody who is involved with helping us. When I see them they always run behind the hedge.”

A government spokesperson told the Mirror that cases of a relationship breakdown are extremely rare, and in these instances, it is up to the council to help rehome the family. Hampshire County Council is aware of the family’s situation.

A neighbour, who has been supporting Maxim and his family, said: “They are a lovely family and are very genuine. It’s so sad to find them in this situation.”

When asked about the breakdown in the relationship between Maxim and the host family, she said: “I’ve known the host for a long time, I think she genuinely wanted to help.

“They won’t say but after two weeks they wanted to terminate the sponsorship.”

The family arrived in the UK with no money
(

Maksim and David have already started school and Amiran and Tamerlan are due to start nursery.

Maxim added: “It’s very bad because we are a family with five children – the youngest one is one year old and the oldest is seven.

“One of our children has autism and we have so many problems with that, and to have problems in another country from our home is worse.” 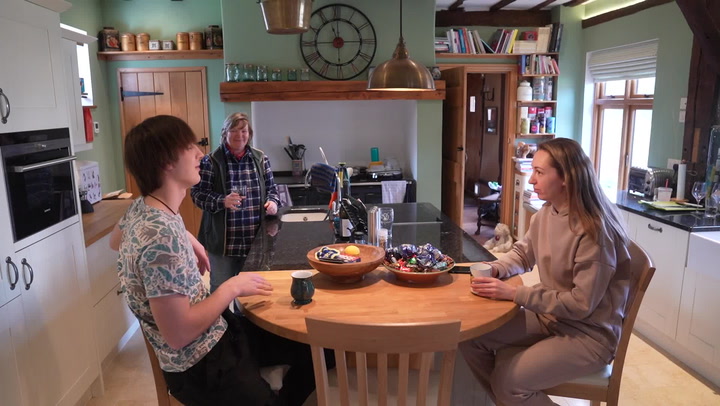 A spokesperson for the Department for Leveling Up, Housing & Communities – who launched the scheme – told The Mirror: “Our guidance and published FAQs have always made clear that the £350 ‘thank you’ payment is offered per family.

“The majority of Ukrainians in the UK are settling in well, however we always knew that there would be a minority of cases where relationships broke down.

“Councils are responsible for finding alternative accommodation where there has been a relationship breakdown.”

A spokesperson for Hampshire County Council told the Mirror: “Most arrangements appear to be working well but occasionally hosts or guests may wish to end the sponsorship arrangement. In those situations, they are asked to contact the local authority as quickly as possible so that support can be provided to either rematch or identify independent accommodation.

“The County Council and Fareham Borough Council, the local housing authority, are aware of this case and are working together to ensure support is in place.”

The Mirror has contacted the host family for comment.