Skip to content
Home News Family, friends and personalities of politics and culture say their last goodbye to Almudena Grandes 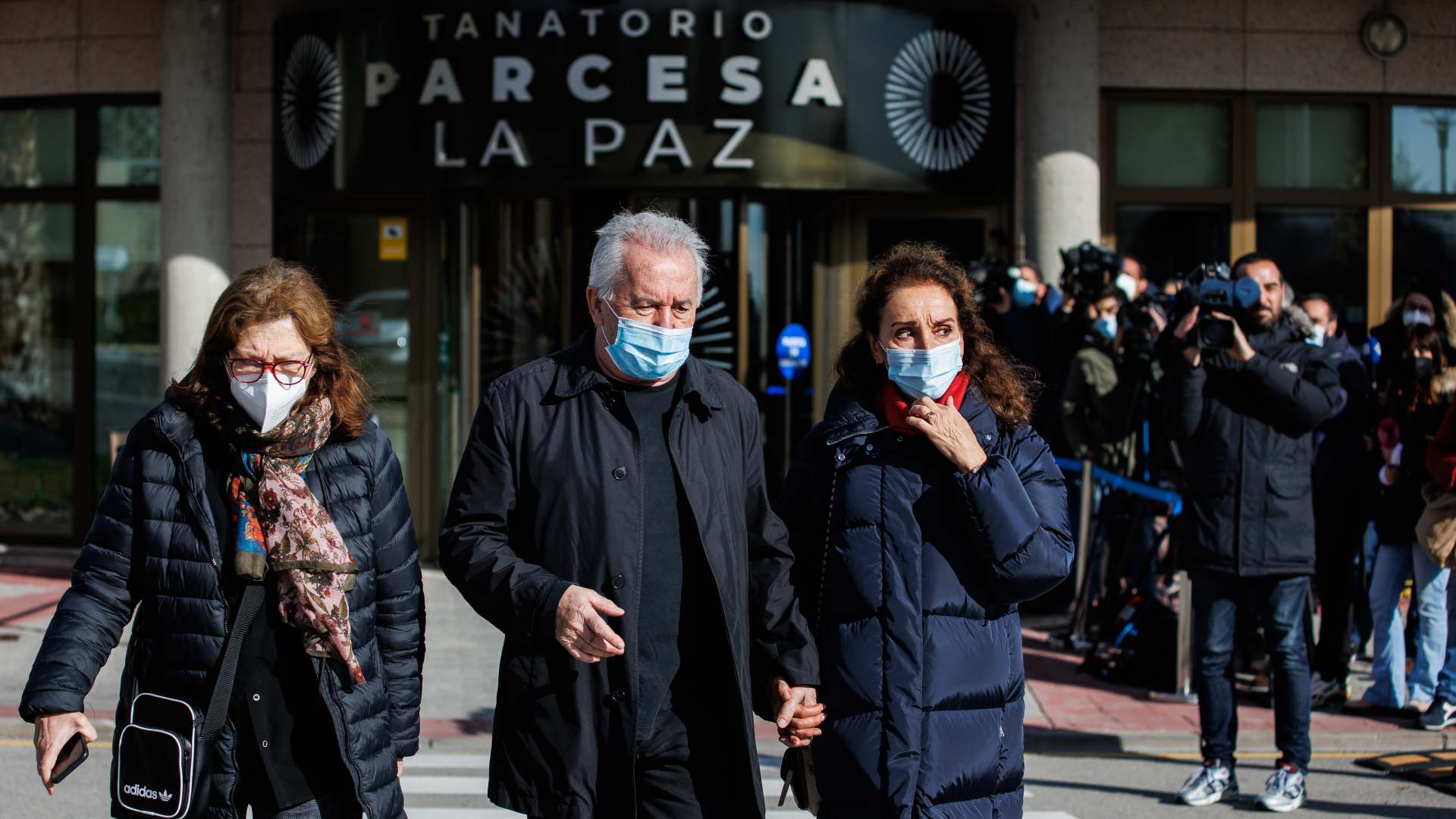 Relatives, friends and personalities of politics and culture have said their last goodbye this Sunday to the writer Almudena Grandes, who died on Saturday at the age of 61 as a result of cancer. All of them have recognized his literary career and his generosity and joy as a person.

The poet Benjamin Prado stated that the author “had left too soon. A person whom we all considered invulnerable”, while the writer Felipe Benítez recalled how “he elevated his friends to the category of family.”

The President of the Government, Pedro Sanchez, which has highlighted the commitment to memory and the word of the author of The frozen heart.

“Almudena has been a woman clearly committed to the word, also to our memory, the collective memory, and also committed to her country, because from its dimension and its intellectual contribution it has made our country a better country “.

For his part, the Minister of Culture and Sports, Miquel Iceta, has lamented the “irreparable loss” for Spain of Almudena Grandes. Before entering the funeral home, Iceta, in statements to the media, pointed out that “there was a confluence of several factors: her taste for history, for the recovery of memory, an incredible quality of writing and her feminist character. and left “. Has added that “that’s what a unique person made up, which explains why today we all feel very sad and more helpless. “

In this sense, the Minister of the Presidency, Relations with the Courts and Democratic Memory, Felix Bolaños, has lamented that Grandes “has left too soon”. “She was a magnificent and exceptional writer, very committed to the forgotten people, the humble, with people who had no voice; she put it on and made us recover her memory and her history, “he added.

For his part, the Minister of Foreign Affairs, Jose Manuel Albares, has highlighted the international trajectory of Grandes. “She is a woman who has done a lot for the image, the letters and the Spanish culture,” he pointed out, to remember that his books “They are translated into multiple languages.” “Many of my counterparts read his works and have referred me to them,” he recalled, before entering the wake.

In addition, Albares wanted to acknowledge the contribution of both Grandes and her husband, the poet Luis García Montero, director of the Instituto Cervantes, to “the memory of this country.” “Today is a very sad day, but his spirit and his memory will remain alive in all of us, “he said.

The collective and committed memory of a country

This farewell was also attended by the Minister of Social Rights and Agenda 2030, Ione Belarra, who has transmitted his “infinite gratitude” to the writer “for giving the ability to feel, imagine, live the lives of those who fought for the same thing that we think we fight today: for social justice and for democracy” .

For the president of the Congress of Deputies, Meritxell Batet, “It is a great loss for a generation that had her as a reference, as a writer and as a woman.” Batet, who highlighted the strength and sense of humor that characterized the author at her entrance to the wake, stressed that “She was a woman very committed to her country and to society”. “We are going to miss her very much,” he lamented.

For his part, the secretary general of the PCE and deputy spokesperson of United We Can in the Congress of Deputies, Enrique Santiago, has also expressed his condolences this Sunday for the death of Almudena Grandes. “Few people like Almudena have done so much for this country and for democratic memory,” he assured.

“Despite the loss, we have his work, which will accompany us for many years, endowing the political and social life of this country with great ethical content”, Santiago stressed, adding that Grandes’ has been a contribution to the history of Spain “unbeatable and incomparable”.

For his part, the Secretary General of CCOO, Unai Sordo, has also wanted to pay tribute to the writer, defining her as a “very great person” and a “monumental novelist”.

The voice of the vulnerable

Jose Luis Rodriguez Zapatero, former President of the Government, also wanted to say goodbye to the writer at the La Paz Funeral Home in Tres Cantos. At the entrance, in statements to the media, he stated that Grandes was “an example of loyalty to ideas and coherence with these ideas.”

In reference to his commitment to memory retrieval, he added that “As a writer of memory, it will remain in time”. “His figure has marked us, has taught us and has given us enormous moments of literary intensity and personal dignity,” Zapatero concluded.

Thus, the former First Vice President of the Government of Spain and former Minister of the Presidency, Carmen Calvo, has confessed feeling “very upset” by the death of the author. “Many things are lost. In addition to being a great writer, she was a great, lucid spokesperson for many causes and things very important to public life, and she was a great public voice for many women,” said Calvo.

“Now you have to be with Luis García Montero, so that he can feel the warmth and affection of those of us who have always been friends “, he concluded on his departure from the funeral home.

For his part, the new Ombudsman, Angel Gabilondo, also present at the wake, has underlined the importance of Grandes not only for literature, but also for “so many vulnerable and forgotten people in Spain.” “Almudena Grandes has given a voice to the supposedly insignificant, but they are people with a lot of meaning for our country,” Gabilondo added.

Secondly, Mariano Barroso, the president of the Academy of Cinematographic Arts and Sciences, of whose foundation Grandes was Patrona, has emphasized that she was a “completely cinematographic writer, for all the value of her characters, and because she tells things in a deep and with a lot of truth “. So much so that up to a total of six works by the writer have an audiovisual adaptation.

Specifically, the first novel by Grandes, The ages of Lulu, published in 1989, it was adapted to the cinema by Bigas Luna. Then came the adaptations of Malena is a tango name and Rough Winds, both by Gerardo Herrero; Cardboard castlesby Salvador Gracia Ruiz; Even if you do not know it, by Juan Vicente Córdoba and Atlas of human geographyby Azucena Rodríguez.

In addition, for Barroso, Grandes counted “in a way that is generally not counted, because it told the story of the defeated, the ‘B-side‘, which in his case was’ face A’, and is a very necessary story. “In addition, he has valued that Grandes” leaves an immense work full of dignity, because of what he wrote and how he wrote it. “

Along the same lines, the writer Juan Cruz Ruiz placeholder image, journalist and deputy director of the newspaper The country, has lamented, at the entrance of the Tres Cantos funeral home, that Grandes “is a talent who dies young and leaves behind an immeasurable work.”

Father Ángel: “His goodness remains for us”

For his part, Father Angel, at the end of it, he wanted to emphasize to the media that the author “was a kind woman.” “What we always have is kindness, which is the most important thing,” he concluded.

Those most visibly affected have been the closest. Her group of friends from Madrid and Cádiz – she had a house in Rota, where she was considered one more neighbor- who have avoided making statements such as the singers Ana Belén and Víctor Manuel.

Neither did the film directors Montxo Armendariz and Fernando Leon de Aranoa. Others, like Greater Wyoming and Joaquin Sabina They have spent hours with the family and in particular with the writer Luis García Montero, her husband.

For the funeral home they have been Atlético de Madrid scarves, the club of his loves, which has precisely posted a photo on social networks of Almudena Grandes with the team’s shirt.

Tribute that the city of Madrid also hopes to make to her if the request that the spokesperson of the mixed group in the City Council and member of Recupera Madrid, Marta Higueras, has announced, to present an urgent motion in the next municipal plenary session to be named daughter favorite of Madrid and has, in addition, a street, square or library in his honor.

Other personalities who have come to say goodbye have been the State Attorney General, Dolores Delgado, accompanied by her partner, Judge Baltasar Garzón.