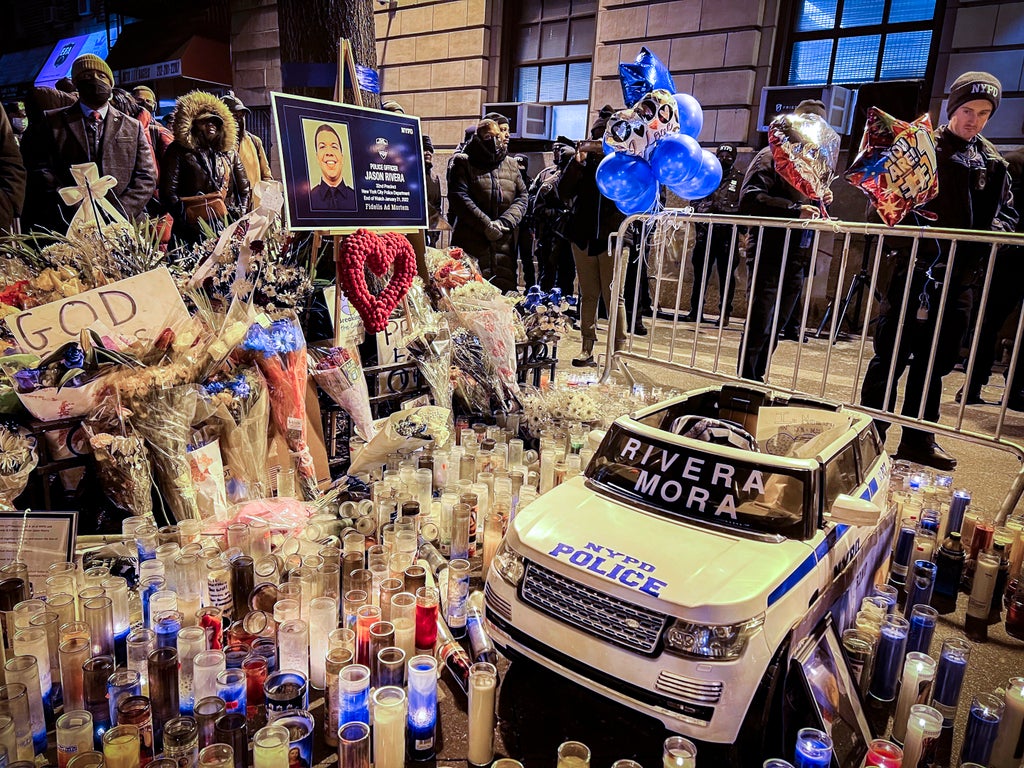 Jason Rivera was no stranger to tensions between New York City police officers and some of the communities they police. Growing up in a Dominican neighborhood in Manhattan, he had seen it up close, like when his brother was pulled out of a taxi and frisked for no apparent reason.

Wilbert Mora also knew it from his youth in East Harlem and spent his college years thinking of ways to address it.

Both sought to be catalysts for change when they joined the police force.

None of them got the chance they deserved. Both were fatally injured last Friday by a gunman who ambushed officers after they responded to a call about a family dispute at a Harlem apartment.

Thousands of mourners were expected Thursday at Rivera’s wake at St. Patrick’s Cathedral, which will also host his funeral Mass on Friday, presided over by Cardinal Timothy Dolan.

The 22-year-old had been a police officer for just a year.

Mora, 27, was in his fourth year in office. Her wake and funeral mass were planned for next week, also at the iconic Roman Catholic cathedral.

Friends this week have been remembering the officers as caring and dedicated. Mora was a gentle giant, with a strong physique and a warm heart. Rivera was a doting newlywed who FaceTimed his wife from his locker.

Marisa Caraballo, a former neighbor of the Rivera family, said the officer’s mother objected when he told her he wanted to join the police force.

“He said it was a dangerous situation,” Caraballo recalled. But the son insisted and his mother gave in. “She said, ‘Okay. I support you.'”

At a vigil Wednesday night outside the police station where Rivera and Mora worked, hundreds of their fellow officers and scores of people from the community filled the street.

Stephanie McGraw, founder of the domestic violence group We All Really Matter, said she met Mora during her frequent visits to the 32nd Precinct.

“He was from the neighborhood,” McGraw said. “He understood the importance of taking on this very crucial and important role as a police officer, not only to make a difference, but also to bring more men and women of color to the NYPD.”

Rivera grew up in Inwood, a neighborhood on the northern edge of Manhattan where many residents hail from the Dominican Republic.

“Officer Rivera and Officer Mora made a decision that they wanted to be part of the solution,” said the Rev. Ronald Sullivan of Christian Parish for Spiritual Renewal. “We don’t believe the narrative that the community and the police are on different teams.”

In an essay describing why he became a police officer, Rivera recalled the injustice of being pulled over in a taxi and seeing officers frisk his brother.

“My perspective on the police and the way the police really annoyed me,” Rivera wrote. But he said he became interested in becoming a police officer himself because he saw the department “pushing hard” to improve relations with the community.

Rivera and Mora were part of the new generation of NYPD officers, one that increasingly reflects the city’s diversity.

When they were young, they saw the end of “broken windows” policing that treated petty crime as a gateway to major crime. They saw the court-ordered reduction in officers’ use of a tactic of routinely stopping youths and searching them for weapons.

Today’s NYPD is 45% white, 30% Hispanic, and nearly 10% Asian. Black New Yorkers, who make up nearly a quarter of the city’s population, make up just 15% of its police force. The city’s new police commissioner, Keechant Sewell, is the first woman and the third black person to lead the department.

Officer Keith Hall, who worked with the slain officers, recalled how Mora’s imposing body, tall and stocky as a football player, contrasted with his approachable nature.

Before joining the department, Mora studied at John Jay College of Criminal Justice, where she impressed Professor Irina Zakirova with sharp questions and a keen interest in finding ways to build bridges between the police and the neighborhoods they serve.

After it became clear that Mora would not survive the shooting, his family had his organs donated, in accordance with his wishes. Mora helped save five people with her heart, liver, kidneys, and pancreas.

Rivera’s wife, Dominique Rivera, posted on Instagram that she and her husband had been childhood friends. She shared a message that he wrote to her on her school days saying that he loved her and wanted to marry her. After her wedding last October, Dominique wrote that Rivera was her “soul mate, best friend and lover from now until the end of time.”

“But now your soul will spend the rest of my days with me, through me, right next to me,” Dominique wrote over a photo of her husband’s police station locker. “I love you until the end of time.”