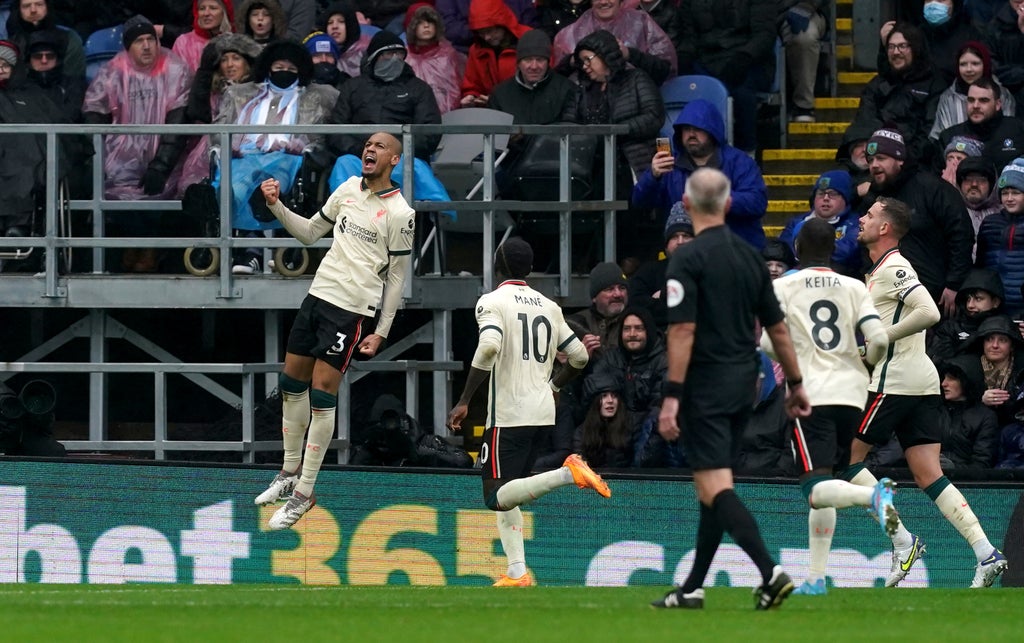 Fabinho’s fifth goal in eight matches helped Liverpool grind out a 1-0 victory over Burnley in testing conditions to maintain their pursuit of Manchester City.

With rain seemingly blowing around Turf Moor in three different directions at the same time, the conditions seemed ideal for an upset – one Jurgen Klopp’s side could ill-afford starting the game 12 points off the leaders.

But even though the visitors gathered their famed original front three of Sadio Mane, Mohamed Salah and Roberto Firmino for the first time since the end of October, it was their new-found goalscoring midfielder who made the breakthrough.

Since the turn of the year, no team-mate has scored more than the Brazil international, whose primary role of anchoring the midfield was also performed superbly in a scrappy contest which saw a number of players struggle.

Certainly Liverpool, kicking against a strong wind, struggled the most as judging balls played over the top became something of a guessing game and often relied on goalkeeper Alisson Becker making the right judgment call in coming out of his area.

Burnley tried their best to exploit that with the runs of Wout Weghorst, Jay Rodriguez and Maxwel Cornet giving experienced centre-backs Virgil Van Dijk and Joel Matip a difficult time.

Josh Brownhill’s early long-range effort was turned behind by the Liverpool goalkeeper while a counter-attack after Salah unsuccessfully appealed for a penalty saw Weghorst clip over Alisson, only for Trent Alexander-Arnold to hack clear.

Burnley are going to need much more from £12million January signing Weghorst, however, if they are going to escape the trouble they are in after an 11th league match without a win.

The giant Dutchman has proven to be effective in build-up play but has not yet posed enough of a threat inside the penalty area and the sight of him hobbling off 17 minutes from the end after landing awkwardly on his left ankle was a concern.

Rodriguez and Weghorst both had good chances to score before the sight of Alisson twisting and turning in an attempt to evade the attentions of Rodriguez in Liverpool’s left-back position showed just how Klopp’s usually well-oiled machine was encountering problems.

Nevertheless, Burnley had been given warning of the opponents’ threat when goalkeeper Nick Pope produced a point-blank save to keep out a volley from Mane, only in the starting line-up due to Diogo Jota’s dead leg in training.

Five minutes before half-time the England goalkeeper did his best to keep out Fabinho’s effort when Mane hesitated on Alexander-Arnold’s corner but he was powerless to prevent the midfielder forcing home the rebound.

They escaped further punishment before the break when Mane raced through in a two-on-two with Salah after James Tarkowski’s misjudged header, only for the Senegal forward to overhit his pass.

Clarets captain Ben Mee headed a wide corner early in the second half and then almost turned Alexander-Arnold’s cross into his own net with 10 minutes to go.

In between those two events the hosts had improved but still neither side produced anything of note.

That remains a greater concern for Clarets manager Sean Dyche, whose side are now seven points from safety after Newcastle’s victory over Aston Villa.