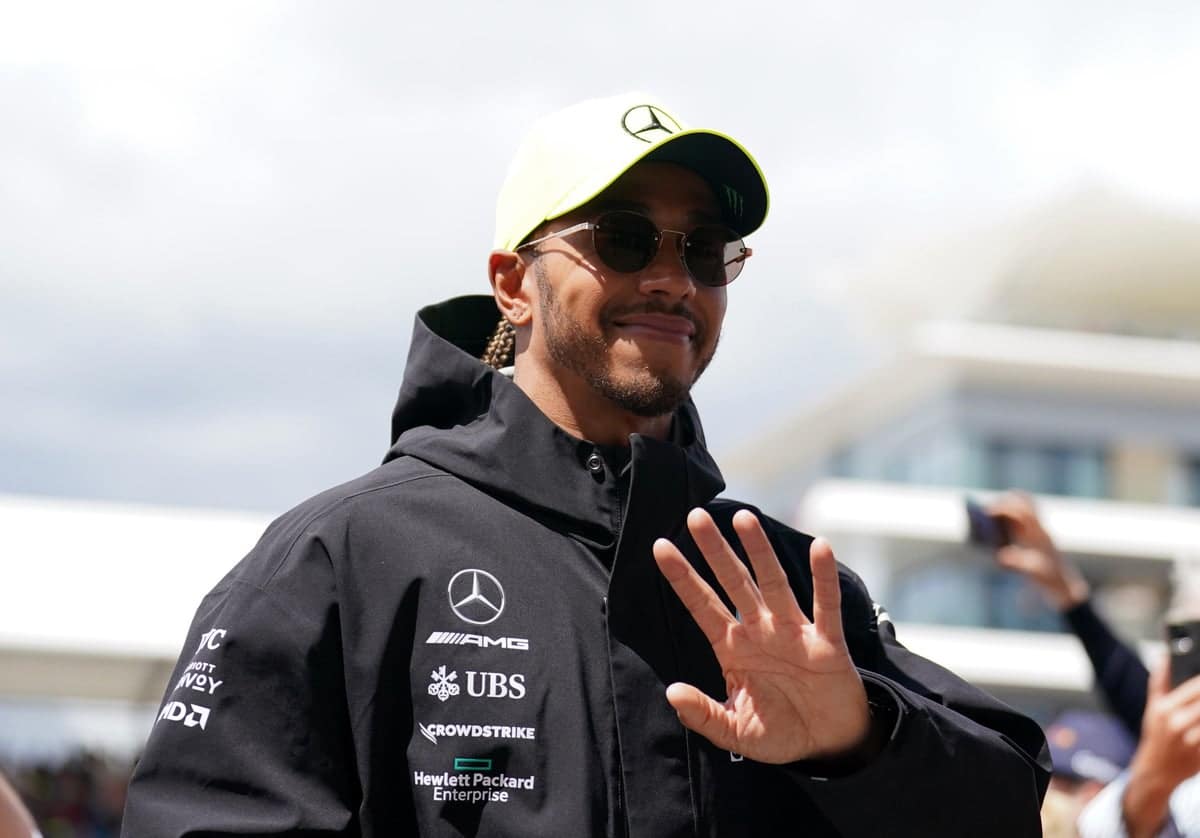 Sainz fought his way past Ferrari team-mate Charles Leclerc in a brilliant 10-lap shootout to the checkered flag following a safety car period to claim his maiden Formula One win.

Sergio Perez finished second, with Lewis Hamilton third after he forced his way around Leclerc with four laps of the 52 laps remaining. A record crowd of 142,000 fans in Northamptonshire were treated to the race of the season which started in extraordinary fashion.

Rookie Zhou was approaching the 160mph opening Abbey corner when British driver George Russell tagged the right rear of the Chinese driver’ machine, sending him on to his roof and sliding out of control.

Follow all the reaction to the British Grand Prix as we already look ahead to this weekend’s Austrian Grand Prix:

Enthralling, thrilling and spine-chilling in equal measure, where on earth to begin to describe this one as the sun sets at Silverstone for another year? Well it’s quite simple really: at the beginning. Because for all the nerve-shredding overtakes, questionable strategy calls and moments of fortune that followed in a brilliant British Grand Prix – won deservedly by first-time victor Carlos Sainz – the stakes in the opening 20 seconds at lights out could not have been much higher.

While the eyes of a record 140,000 spectators were fixed on the battle of the front, with Max Verstappen overtaking Sainz into turn one, what followed behind encapsulates the mouth-watering madness of high-speed motorsport. It was only a light touch from Pierre Gasly, sandwiched in between George Russell and Guanyu Zhou, but it was enough.

The Frenchman clipped the back of home favorite Russell’s rear-left tire, sending the Brit’s Mercedes spinning into Zhou’s Alfa Romeo, which flipped in a 180 spin almost inevitably. And on the tarmac, gravel and then tire barrier, the Alfa did not stop spinning.

Max Verstappen emphasized the importance of scoring points after a tricky day at the office at the British Grand Prix on Sunday.

The Championship leader was winning the race early on before a puncture curtailed his chances, with damage to the bodywork also hampering his performance at Silverstone.

Despite his misfortune, the world champion picked up six points with his Championship lead going into the Austrian Grand Prix this weekend now 34 points from team-mate Sergio Perez.

“An unlucky afternoon,” he said on Instagram. “We were on it from the beginning of the race, after getting the line great on both occasions. “After picking up debri my floor was severely damaged and we struggled throughout the race. I gave it my all for P7 and collected important points. We’ll keep pushing to come back stronger in our home race in Austria, can’t wait to see the support by the Orange Army.”

A combination of crashes, Safety Cars, problems to other vehicles and some fantastic late overtaking saw the seven-time champion finish on the podium for the first time since the opening round of the 2022 season in Bahrain, after a campaign of struggle with porpoising and control issues in the new Mercedes car.

But on a day when around 120,000 fans attended race day at Silverstone, Hamilton – who did briefly lead the race – praised the occasion as F1 at its best and hoped the performance could set a platform for improvement across the rest of the year.

“We’ve had the biggest show-up in history, thanks for this incredible support – we don’t see this anywhere else in the world,” he said after the race.

Mick Schumacher was relieved that he had silenced his critics after scoring the first points of his Formula 1 career at the British Grand Prix.

The Haas driver was involved in a battle with Max Verstappen for seventh in the closing stages but nonetheless crossed the line eighth for the moment he had been waiting for, in the 32nd F1 race of his career.

“I think overall we are really happy coming back from P19,” he told F1.com.

“I said we had the speed to go forwards and we definitely showed it today.

“It’s great for the team, we have the double score in the points. That’s obviously very helpful in the Constructors’, but also for me I think it’s great to just get those questions from the media away and focus on what’s really important and that’s the racing and the driving in itself.”

The Chinese rookie driver, competing in only his 10th Formula 1 race, was turned upside-down after clashing with George Russell at turn one of the first lap and flew into the perimeter fence beyond the tire barrier.

The marshals and medical team on-site were quick to react, with Zhou left trapped in the car, extracting him before placing the 23-year-old on a stretcher.

Zhou tweeted shortly afterwards to say that the halo device – introduced in 2018 to protect the drivers while in the cockpit – saved his life and emphasized his gratitude to the Silverstone staff for their ‘fantastic’ work.

I tweeted: “Hi everyone! Thank you all for the kind messages. I want to thank the marshals and the medical team at Silverstone, they were really fantastic. I’m keener than ever to get back on track, see you guys in Austria!”

Initially criticized by Hamilton and Verstappen, how the halo has saved lives in Formula 1

Guanyu Zhou’s harrowing crash at the start of Sunday’s British Grand Prix was another victory for Jean Todt and the FIA ​​technicians who acted on the concerns of drivers back in 2015.

The likes of Jenson Button and Sebastian Vettel were pushing for mandatory head protection, particularly in the wake of Justin Wilson’s death in IndyCar that year and Henry Surtees’s sad passing in an F2 race in 2009. Jules Bianchi also lost his battle in July 2015 after his horrific crash at the Japanese Grand Prix nine months earlier.

Yet in the years since, there have been no driver fatalities in Formula 1. Impressive, frankly, considering the scale of accidents we have seen in recent years with Zhou’s the latest in a long list of crashes where the consequences could have been fatal.

While in the 2018 build-up Toto Wolff remarked on the halo, “if you give me a chainsaw I would take it off”, a matter of months later we saw the first instance of its very genuine functionality amid the propelling speed and forces of to Formula 1 car.

Red Bull’s Verstappen memorably crashed into Copse corner on the opening lap of last year’s race after tangling with Hamilton, who went on to win the race despite a 10-second time penalty.

Yet in Sunday’s dramatic Grand Prix at Silverstone, Leclerc and Hamilton battled superbly and fairly through the same corner and seven-time world champion Hamilton couldn’t help but make reference to last year as he praised the Monégasque driver.

“Charles did a great job. What a great battle,” Hamilton told Sky F1.

“Very sensitive driver and clearly a lot different to what we experienced last year. In Copse for example, two of us went through there no problem. What a battle.”

The seven-time world champion was in the lead of the race having not pitted following the first lap restart and was comfortable on medium tyres.

Yet when Mercedes brought Hamilton in on lap 33, instead of the quicker but less durable soft tires, the Silver Arrows put the Brit on the safer hard compound to see out the remaining 19 laps of the race. However he did pit again due to a late safety car.

Stay here for all the latest news in the world of F1 as, after all the drama at Silverstone, we start to look ahead to Austria this weekend…

The protestors, from the Just Stop Oil activist group, sat down on the Wellington straight during lap one, with the race red flagged just before the cars reached the group after Guanyu Zhou’s crash seconds earlier at Abbey.

“I guess there was some talk about it, I think everybody is free to have their own view on it,” four-time world champion Vettel said after the race.