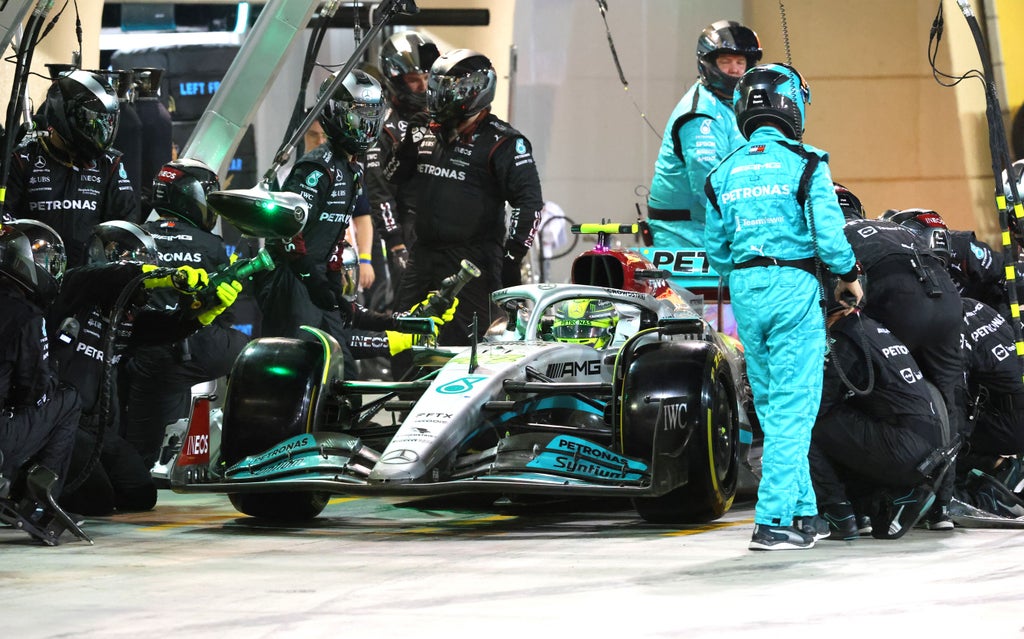 Follow all the latest news from the world of Formula 1 as the start of the Saudi Arabian Grand Prix approaches.

Following their delighted at finishing third and fourth in last weekend’s season opener in Bahrain, Mercedes are preparing to make changes to their car in an attempt to close the gap in pace to Ferrari and Red Bull. Team principal Toto Wolff has said his engineers will “take a chainsaw” to the rear wings on the cars of Lewis Hamilton and George Russell as they aim to be more competitive for the race victory in Jeddah on Sunday.

Red Bull meanwhile will be scratching their heads after suffering a double retirement in Bahrain. Max Verstappen was left unimpressed by the mysterious issue which denied him a podium finish, and later team boss Christian Horner suggested what the issue might be, saying: “It looks suspiciously like the failures are related to each other and it may be an issue with the fuel system.” Follow all the latest news and reaction from the Bahrain Grand Prix below, as the F1 world looks ahead to the next race in Saudi Arabia.

Ross Brawn believes Formula 1 has taken a significant step forward in “race-ability” with its new generation of cars for the 2022 season compared to the “horrible” machinery of the previous era.

At the first race of the new campaign in Bahrain on Sunday, Ferrari’s Charles Leclerc and Red Bull’s Max Verstappen engaged in an enthralling back-and-forth tussle for the lead across two laps which entertained fans and lead plenty to believe that F1’s regulation change is working well already.

For 2022, F1 has returned to so-called ‘ground effect’ car designs for the first time since the 1980s, with complicated floor systems used to suck the cars to the ground giving them more grip and downforce. The regulation change has been devised in order to increase the quality of racing in F1 by allowing drivers to follow one another more closely and race harder, which should in turn improve overtaking.

In the previous era of car design, cars would lose up to 35 percent of downforce when following another in front, and that figure is now believed to be significantly lower thanks to the reintroduction of ground effects. Brawn says that while nobody at F1 is patting themselves on the back just yet, all the indications so far are positive.

Red Bull‘s “brutal” double retirement at the Bahrain Grand Prix may have been caused by a fuel lift pump issue checked by the team on the eve of the season-opening race, Martin Brundle has suggested.

With Max Verstappen and sergio perez both failing to finish the opening race of the season Red Bull suffered a disastrous Bahrain Grand Prix as Ferrari claimed a one-two and Mercedes gained valuable points in the standings.

It allowed Carlos Sainz to take second place and things went from bad to worse for Red Bull when Perez’s suffered the same problem at the start of the lap, with Lewis Hamilton taking his spot on the podium.

Red Bull have yet to confirm what the reliability issue was but team boss Christian Horner suggested there were identical problems with both Verstappen and Perez’s cars that left their power units without fuel for the final lapses of the race.

Mercedes main team toto wolff says the team must improve the speed of its pit stops as well as its car if they are to challenge at the front in the 2022 Formula 1 season.

The new campaign began in Bahrain on Sunday and while Lewis Hamilton was able to secure a podium for the team by virtue of finishing in third-place behind Ferrari pair Charles Leclerc and Carlos Sainz, the pair were way off the pace off the Scuderia and arch rivals Red Bull, whose drivers Max Verstappen and Sergio Perez were both forced to withdraw late in the race after losing engine power.

On the eve of the new season, the FIA ​​said its former race director, Michael Masi “acted in good faith and to the best of his knowledge” after he fudged the rules following a late safety car to allow Max Verstappen the shot to beat Hamilton to the title.

They also stopped short of offering Hamilton and his Mercedes team an apology. Masi was removed from his post last month.

AlphaTauri’s Pierre Gasley is likely to have to take a grid penalty early in the 2022 Formula 1 season after his car caught fire at the season-opening Bahrain Grand Prix on Sunday.

The Frenchman was forced to pull over to the side of the road with less than ten laps of the race to go at Sakhir, with his engine losing power the blaze began at the rear of the car, melting much of the bodywork and damaging various internal components.

Gasly had been set to score strong points for the Italian team after progressing up the field from his starting position of tenth, but ultimately because the first driver to retire in the 2022 campaign.

He was followed shortly afterwards by Max Verstappen and Sergio Perez, who also run Red Bull Powertrains engines in their Red Bull cars, after the team took over manufacturing from Honda following the Japanese company’s withdrawal from the sport at the end of 2021.

Follow all the latest news from the world of Formula One as the start of the Saudi Arabian Grand Prix approaches.