The highest it has been in 40 years, the Consumer Prices Index inflation figure rose slightly to 9.1% in May from 9% in April, the Office for National Statistics has revealed.

The increase matches what analysts had expected as rates continue to rise and people begin to feel even more crippled by the cost of living.

Kate Forbes, Scotland’s cabinet secretary for finance and the economy, said the figure revealed an “extremely worrying outlook”, however, added the UK Government holds “most of the powers” ​​to tackle the cost of living crisis.

Her comments come as the Bank of England has warned inflation will reach 11% this year.

The Finance Secretary also said she had “huge sympathy” with all workers, including railworkers on strike, who are seeing their “costs rising faster than their wages”.

Ms Forbes said she cannot “inflation-proof” all pay deals but said there can be resolutions which are affordable, progressive and recognize “immense pressures” of workers.

The MSP was unable to commit to raising the Scottish Child Payment – ​​a weekly payment that families or carers can get for every child who’s under 6 years of age.

Ms Forbes said there is a “myriad” of support measures the Scottish Government has issued within its budget to help with the cost of living, such as up-rating all social security benefits at the rate of inflation at the time of the budget and providing additional support through the Scottish child payment.

The Resolution Foundation and Save the Children released a report on child poverty in Scotland which points to the benefits of increasing the child payment above inflation in 2023 and 2024.

Ms Forbes welcomed the report as she said the Scottish Government had been on track to meet targets but “the challenges of today” means the government will have to work “even harder” to meet those commitments.

Prices continue to rise at the fastest rate in 40 years as UK inflation hits 9.1…

Speaking on BBC Good Morning Scotland on Wednesday, the Finance secretary told the programme: “We have said that we will set out in next year’s budget where we go next with the Scottish Child Payment but at the moment we have said it will rise to £ 25 from the end of the year. “None of this funding is available elsewhere in the UK and that means at the moment whilst we bridge our way to the Scottish Child Payment, families are receiving the help right now – £520 for school aged children.

Ms Forbes said “ultimately” the UK Government holds most of the powers – such as power over energy, minimum wage, social security spending – needed to tackle the cost of living.

The ONS said rising prices for food and non-alcoholic beverages helped fuel inflation in May, with the biggest cost increases seen in bread, cereals and meat. 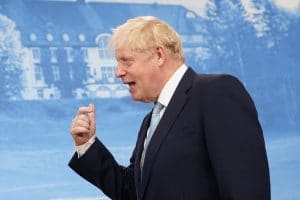