Skip to content
Home News Exposed: the mass cloning of limited companies by fraudsters – and Companies House won’t do anything about it 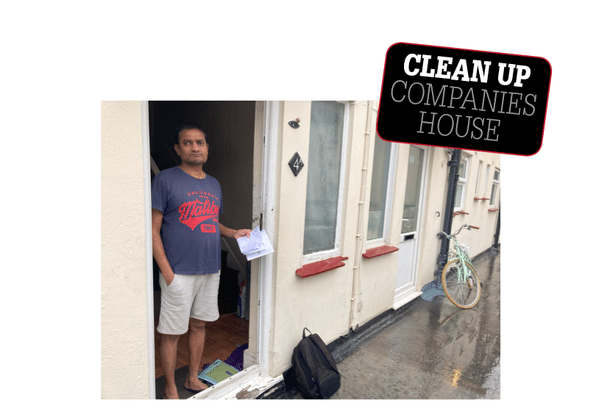 A flood of clone firms has hit the freelance worker industry – and Companies House is accused of doing nothing to stop it.

This swathe of newly incorporated companies have names that are virtually identical to existing umbrella payroll firms, which sort the pay and tax of many temporary workers in sectors from building to teaching, health care and banking.

One of the genuine companies is Clarity Umbrella Limited of Ipswich.

The director of the genuine firm is Lucy Smith, who complained to Companies House, but was told the new company’s name was considered sufficiently different to be “acceptable”.

But the reality, she says, is that the new company is being used to pose as her business.

“On Friday, I received a call from a contractor who had been cold called by a company claiming to be Clarity, offering a significantly higher take home, indicating a tax avoidance scheme was in place,” she said.

“They even used my name, and had managed to obtain an Ipswich phone number to make it look like it was us calling.

“Companies House needs to take action. The individuals named behind these cloned companies may not even be actual people, there is no digital footprint that can be found to indicate that they even exist.

“When there is so much evidence to show that there is intention to defraud, I cannot comprehend why Companies House are so blasé about this situation.

“Allowing businesses like this to continue will leave contractors at risk, and the Government coffers significantly out of pocket if tax is going unpaid.

“I have seen many of my competitors spend thousands trying to sort this, but I am of the opinion that it becomes pointless as Companies House refuse to do anything.”

“I know they are using these details because contractors have sent them to me. The only difference is the bank account details.

“We’ve spoken to Companies House and their reaction is that the name is different enough to be acceptable. They are not interested even after they’ve been told that there are 15 clones all apparently set up by the same people.

“Workers are putting themselves in an awful position if they think their taxes are being paid and they are not, and if there’s an accident there’s no insurance in place to cover them, because my insurance wouldn’t because they are not employed by me. ”

“We immediately contacted Companies House and got a refusal to deal with this on the grounds that the clone wasn’t sufficiently similar, which meant we had to pay £400 to appeal,” said director Carolyn Walsh.

“The other company is now on notice to change its name.

“I expect that this attack is the first of many. Companies House has to be proactive at the outset to prevent fraudsters from using incorporation to defraud workers, genuine companies and the Treasury.”

The trade body for the umbrella companies is the Freelancer & Contractor Services Association.

Its chief executive Chris Bryce is furious at the lack of action from Companies House.

“The real issue is the ease with which this cloning is done,” he said.

“We approached the registrar of companies about this and were told that Chris Bryce Limited and Chris Bryce LLC are two different companies, and even though they have an almost identical name they could not refuse registration of the second name.

“Because the registrar of companies seems to be unwilling or unable to police the names of new companies and compare them to existing ones it is relatively easy to set up a clone – and the registrar is so slow to strike these off.

“The root cause is the criminal but the system itself does not make it difficult for clones. It’s baffling how this situation has come to pass.”

I found no trace of the clone companies at the registered office addresses in North London that have been filed to Companies House.

An address in Ruislip appears to be a deserted flat, while the resident at a Wembley address says he has no connection with the companies or supposed directors, named on Companies House records as Kishan Peddireddy and Prashantkumar Patel.

“This is my family home, someone is using my address without my permission,” said Pinakeen Patel, who estimates that he’s received letters for 25 different companies.

“How can Companies House allow an address to be used like this without checking it first?

“I keep returning letters to senders and I’ve phoned Companies House about it but I get stuck on hold for two hours and nothing gets done.”

I asked why it was allowing multiple companies to be incorporated despite protests from existing firms with very similar names, and despite claims that these new companies were engaged in fraud or tax evasion.

A spokesperson said that planned reforms will include identity verification of people who run companies – outrageously, such verification does not currently take place.

Under the reforms, Companies House will also be given the power to challenge the information it receives.

The spokesperson said that at present it has no power to investigate suspected fraud, but insisted: “We work closely with law enforcement partners where fraud is suspected.”

See also  Tornadoes in the US: White House Calls for Investigation of Climate Change Role in Tornado Tragedy | International