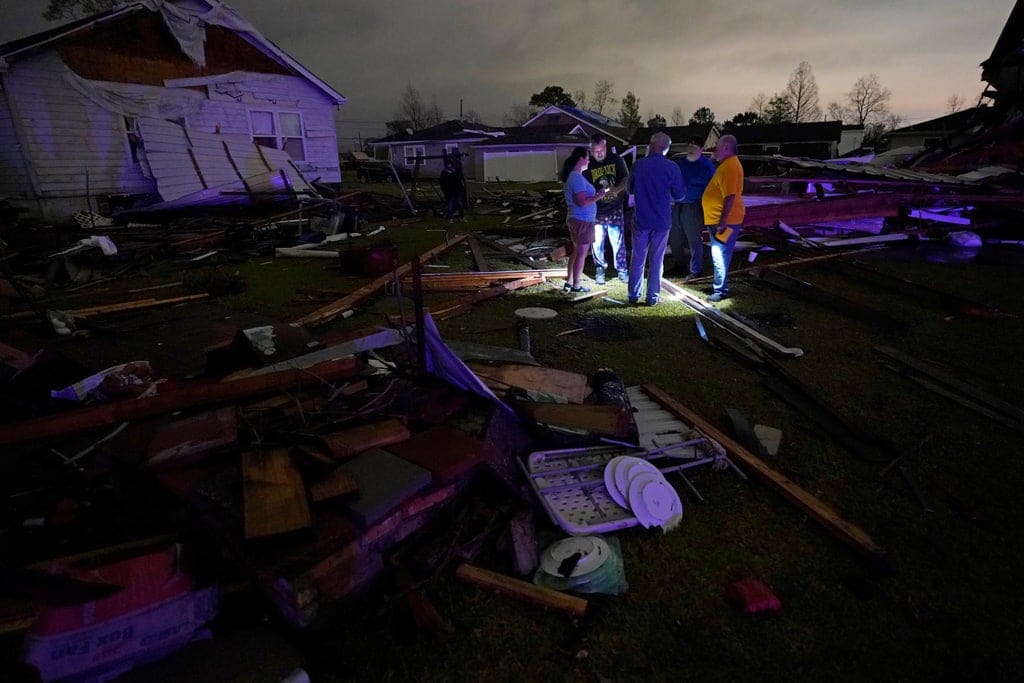 Forget “The Wizard of Oz.” Tornadoes are causing far more deaths and destruction east and south of Kansas these days. And they’re often doing it in the dark of night.

Tuesday night’s deadly tornado that struck the New Orleans area is the ideal example of what experts say is the 21st century problem with twisters: Killer tornadoes have shifted a bit out of the vast emptiness of the Great Plains, more into the Southeast where there are more people to hit, poorer populations and more trees to obscure twisters from view.

And if that’s not enough, these Southeast twisters are more likely to strike at night when they are more dangerous.

Here’s a closer look at what’s behind the shift:

WHY ARE TORNADOES KILLING MORE PEOPLE OUTSIDE THE GREAT PLAINS?

Since 2000, nearly 89% of the 1,653 Americans killed by tornadoes — not counting this week’s victims — lived east of the Dakotas, Nebraska, Kansas, Oklahoma and Texas, according to an Associated Press analysis of National Oceanic and Atmospheric Administration data.

It’s not so much a meteorology problem but a people one, tornado experts said.

“It’s a function of the human-built environment,” said Victor Gensini, a professor of meteorology at Northern Illinois University who specializes in severe storms. “The Mid-South does get a lot of tornadoes, but in the Mid-South we have more things to hit. We have more bull’s eyes on the dartboard. We have more cities. We have more weak frame housing stock. Tornadoes happen more often there at night, which is exactly what we saw last night.”

Harold Brooks, a senior scientist at NOAA’s National Severe Storms Laboratory, said traditional 20th century tornadoes, the type that make Oklahoma and Kansas famous, are less deadly because they go for thousands without anything in the way. In 1991, he and his wife chased for 66 miles a tornado in Oklahoma that had winds hit 286 mph. It hit two barns; not one but a few cows were hurt.

Put that storm near New Orleans at night and dozens of people would be killed, probably many more. In the Southeast “all it takes is a weather event to occur and you’ll have people in the way,” Brooks said.

DOES CLIMATE CHANGE HAVE A ROLE?

In 2018, Brooks and Gensini published a scientific study showing deadly tornadoes were happening less frequently in the tornado alley of Oklahoma, Kansas and Texas and more frequently in “tornado fatality alley, which is the Mid-South,” Gensini said.

What’s likely happening is that the West is getting drier because of human-caused climate change, which makes it harder for the air to become moist and unstable, which is crucial for tornado formation, they said. The Southeast is getting warmer air, which holds more water vapor, which creates that important instability, Gensini said.

Climate models predict this type shift 50 years in the future or so, yet it appears to be happening now, Gensini said.

There’s a La Nina, a natural periodic cooling of parts of the Pacific that shifts global weather patterns, and that usually means more tornadoes in the Southeast because of changes in the jet stream and moisture, they said.

See also  'It's time to show who I am now': Texas student whose face was ripped off by two rescue dogs reveals injuries

Tuesday’s nighttime tornado illustrated a problem because when twisters hit at night, people can’t see them coming as easily and often don’t react as well, the tornado experts said.

About three-quarters of the tornadoes that hit Oklahoma and other Great Plains states occur between 5 and 9 pm so people know when to expect them and its more daylight, Brooks said. But in the Southeast they can hit any time, which means more often at night than in Oklahoma, making them more dangerous.

Another reason they happen more at night in the Southeast is because they happen more in the springtime and there are just fewer daylight hours, Gensini said. Spring storms are juicier and stronger than summer ones so they don’t need the sun’s daytime heat to add that extra kick of energy to spur tornadoes, he said.

WHAT ABOUT THE LANDSCAPE?

The Southeast is also hurt by having more trees, hills and buildings that block people’s views of incoming storms.

When there’s a tornado warning in the Southeast, often people are “out to their front porch and they don’t really see anything, and it just kind of looks like, you know, a dark sky,” Houser said. “They may be less likely to actually hear those warnings than if they are walking out their door and they see a tornado on the horizon, even if it’s far away. So there’s a little bit of geography that plays a role there.”

ANY GOOD NEWS FOR THE REGION?

The one advantage tornadoes in the Southeast have is that they are easier for meteorologists to forecast the conditions ripe for bad outbreaks much earlier. Tuesday’s severe storm was warned about eight days in advance by NOAA’s Storm Prediction Center, which is unusual, Brooks said.