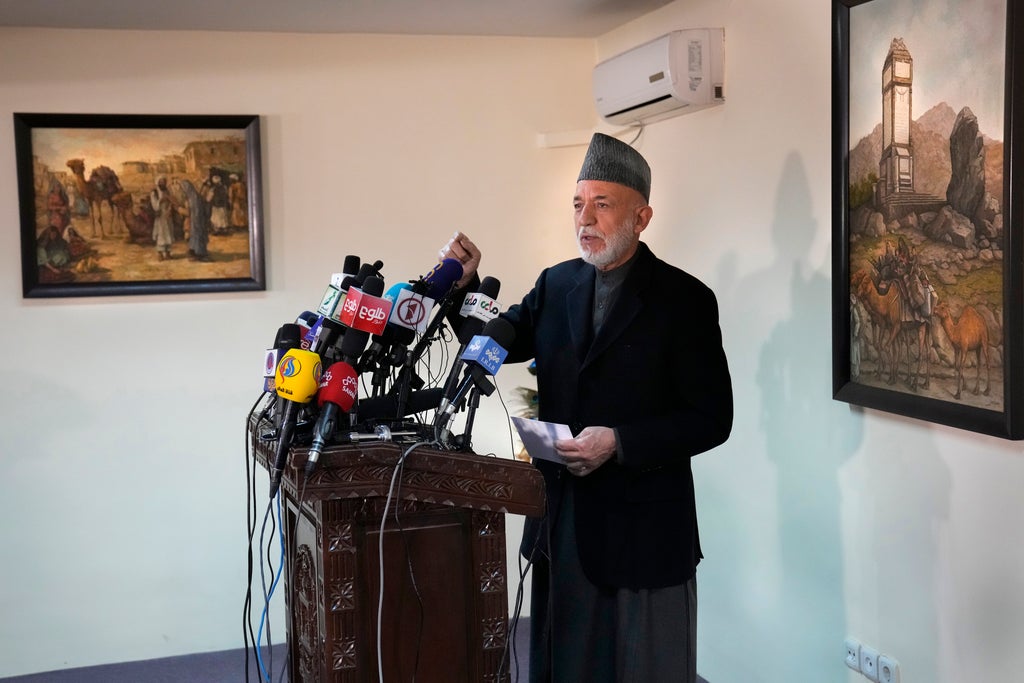 Afghanistan’s former president on Sunday called a White House order to unfreeze $3.5 billion in Afghan assets held in the US for families of 9/11 victims an atrocity against the Afghan people.

Former President Hamid Karzai at a packed news conference sought the help of Americans, particularly the families of the thousands killed in the 9/11 terrorist attacks, to press President Joe Biden to rescind last week’s order. He called it “unjust and unfair,” saying Afghans have also been victims of al-Qaida leader Osama bin Laden.

Bin Laden was brought to Afghanistan by Afghan warlords after being expelled from Sudan in 1996. Those same warlords would later ally with the US-led coalition to oust the Taliban in 2001. However, it was Taliban leader Mullah Mohammad Omar who refused to hand over bin Laden to the US after the devastating 9/11 attacks that killed thousands.

“The people of Afghanistan share the pain of the American people, share the pain of the families and loved ones of those who died, who lost their lives in the tragedy of September 11,” said Karzai. “We commiserate with them (but) Afghan people are as much victims as those families who lost their lives. … Withholding money or seizing money from the people of Afghanistan in their name is unjust and unfair and an atrocity against Afghan people.”

Sept. 11 victims and their families have legal claims against the Taliban and the $7 billion in the US banking system. The $3.5 billion was set aside for a US court to decide whether it can be used to settle claims by families of 9/11 victims. US courts would also have to sign off before the release of humanitarian assistance money.

We “ask the US courts to do the opposite, to return the Afghan money back to the Afghan people,” said Karzai. “This money does not belong to any government,,, this money belongs to the people of Afghanistan.”

Meanwhile, Biden’s order calls for the $3.5 billion allocated to humanitarian aid to be put into a trust and be used to assist Afghans, bypassing their Taliban rulers.

But Karzai demanded all $7 billion be returned to Afghanistan’s central bank to further its monetary policy. I have argued against giving Afghan reserves to international aid organizations to provide humanitarian aid.

“You give us our own money so that it can be spent for those foreigners who come here, to pay their salaries, to give it to (non-governmental organizations),” he said.

Afghanistan’s economy is teetering on the brink of collapse after international money stopped coming into the country with the arrival in mid-August of the Taliban. Last month, the United Nations made a $5 billion appeal for Afghanistan. The UN warns that 1 million children are in danger of starving and 90% of Afghans live below the poverty level of just $1.90 a day.

Karzai was Afghanistan’s first democratically elected president after the US-led coalition ousted the Taliban in 2001. He served until 2014 before Ashraf Ghani, who fled the country on Aug. 15, leaving the doors open for the Taliban takeover of Kabul. Karzai was highly regarded as embracing all of Afghanistan’s many ethnic groups but his administration, like subsequent Afghan administrations, was dogged by charges of widespread corruption.

Karzai spoke to a packed press conference inside his sprawling compound in the capital of Kabul. Dozens of Afghanistan’s Pashto- and Persian-language journalists jockeyed for space in a second-floor conference room with more than a dozen television cameras.

Karzai used the news conference to press the country’s Taliban rulers and their opponents to find a way to come together. He lobbied for the traditional Afghan grand council, or loya jirga, as a means to find consensus and establish a more representative administration.

“We, as Afghans, and the current acting Islamic government must do our best to not give America or any other country any excuse to be against us,” he said.

Anger has been growing in Afghanistan since Friday’s White House announcement. Demonstrators marched again in Kabul on Sunday demanding the money be returned to Afghanistan. However, the Taliban, who have also condemned Biden’s order, dispersed protesters as they tried to gather near the city’s Eid Gah mosque.