Skip to content
Home News Everything ready for the start of childhood vaccination: this is how it will be in each community | Society 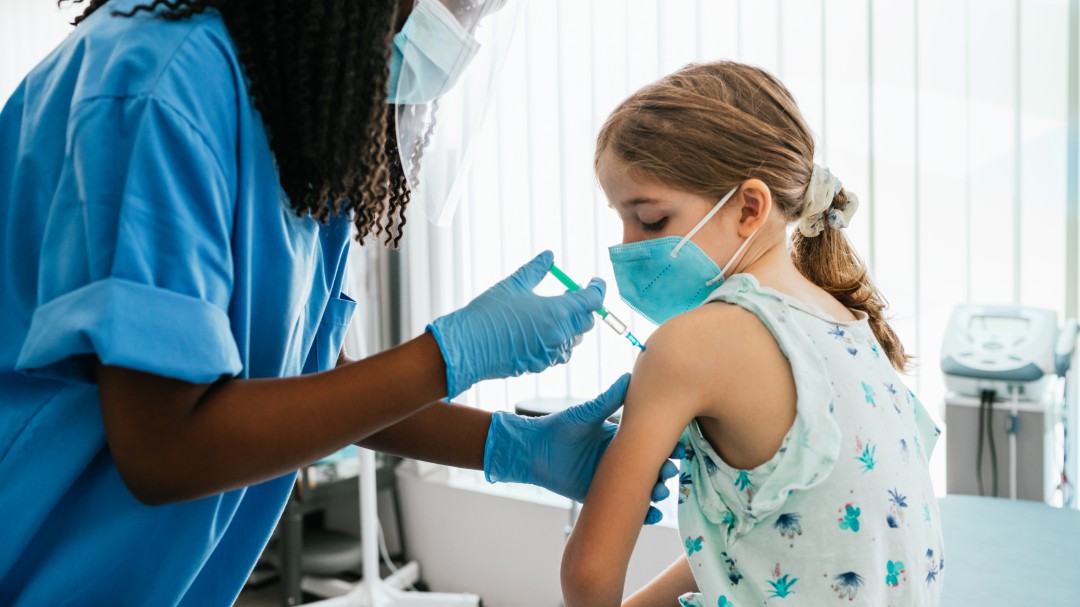 The autonomous communities already have everything ready to begin this Wednesday to administer the pediatric vaccine against COVID and they will do so mainly in health centers and authorized points, vaccination centers and hospitals. Only five autonomies have opted to vaccinate also in schools.

These are the Valencian Community and La Rioja, which have decided to vaccinate in schools, also a “preferred” option in Extremadura. Castilla-La Mancha is preparing for a mixed combination in schools and health centers while Andalusia prefers the health center, but will turn to schools in rural areas. Canarias does not rule out later enabling some point in educational centers if it sees it necessary.

However, this option of taking vaccination to school has been totally ruled out by five other autonomies (Catalonia, Asturias, Balearic Islands, Navarra and Murcia) while Madrid will vaccinate children in one of the 25 public hospitals in the region, Castilla and León in the vaccination fields, Galicia in the mass vaccination centers and Ceuta will enable its City Council.

With the communities already prepared, this Monday the first shipment of 1.3 million Pfizer pediatric vaccines for children from 5 to 11 years old arrives in Spain. As soon as they have them, the Ministry of Health will distribute them among the autonomies according to their target population. The first to vaccinate will be children at risk and the elderly (10 and 11 years).

The vials for children will have an orange cap to distinguish them from those for adults, and unlike older ones, the pediatric formula is reduced to 10 micrograms, one third of normal, and does not require dissolution. After this first shipment, another of 2 million is expected in January, with which the first doses of children between 5 and 11 years old could be covered, which exceed 3.2 million throughout Spain.

Pfizer’s pediatric antidote against COVID is endorsed by the European Medicines Agency, which concluded that, although children from 5 to 11 years old have the disease in a mild or asymptomatic way, the benefits of vaccinating them outweigh the risks.

In trials, the vaccine was 90.7% effective in preventing symptomatic COVID. The children will also be given two punctures, although separated not by 21 days but by eight weeks, at the proposal of the experts from the vaccine presentation.

The Andalusian Government understands that it is not necessary to resort to vacudronomists, since there is sufficient capacity in the health centers in the afternoon and on weekends to make it easier for parents to take their children.

The Government of Aragon opens this Monday the self-appointment so that children born in 2010, 2011 and 2012. The vaccine will be administered in health centers and specific places established, and in rural areas a strategy has been agreed with the health services to do it in the way that is most appropriate for them.

The process will be carried out in the afternoon during the school period and will be extended to morning hours during Christmas holidays.

The Principality’s Health Service has ruled out administering the dose against the coronavirus to minors in schools and has opted for health centers and vaccination points to which they will be summoned by telephone.

According to the Asturian Government, the vaccination of the 47,000 minors could be carried out “perfectly in a week”, but it has warned of the difficulty of carrying it out at this time as it coincides with the holiday period.

The Ministry of Health will report this Monday on the vaccination process for minors that is expected to start on Wednesday, although it totally discards educational centers as immunization points.

The campaign covers the 83,000 minors on the islands between the ages of 5 and 11. The first to be inoculated will be children with serious illnesses and the 9-11 age group.

The Canary Islands received 54,000 doses of the pediatric vaccine this Monday. In principle, the vaccination of children will be done in vacudronomists and in health centers, but it is not ruled out later to enable some point in educational centers if it is considered necessary.

The Cantabrian Health Service (SCS) plans to start vaccination on December 15. The approach he is considering is to inoculate in some health centers, by self-appointment, in the afternoon and on weekends.

As explained by the Ministry of Health, the operation is initially planned, without prejudice to the fact that it can be adapted to the circumstances that arise as the vaccination progresses.

In this community, the vaccination of children will be carried out from the 15th both in educational centers, through mobile units with pediatrics, as well as in health centers or vaccination points.

However, the regional government contemplates that most of the minors are vaccinated in health centers and vaccination points, taking into account that the Christmas holidays are close. About 60,000 doses are expected to be received in a first shipment to serve a population of 145,000 children.

It is planned to start with the oldest, 10 and 11 years old, and probably also with those of 9. The appointments for the vaccines will reach the parents through a message on the mobile.

The Ministry of Health has chosen to face this process in the vaccination ranks used in the processes with adults, although they will also be called to administer doses in some health centers.

As with other health processes, minors must be accompanied by an adult, preferably one of their parents, since if they are not one of them they must have signed parental authorization.

Catalonia will follow the same system as with adults. The Generalitat will open appointments on the web to start the vaccination of children on the 15th in existing points such as pavilions, sports centers, Primary Care centers and hospitals with pediatric lines, but not in schools, since they consider that when dealing with children so It is better for children to be accompanied by their parents at the immunization points.

See also  Martin Roberts of Homes Under the Hammer has converted an old farmhouse, and the transformation is incredible

Parents may request an appointment on the web and it will be enough to prove the relationship when they arrive at the vaccination point with their child; If minors are accompanied by other family members, they must complete an informed consent form.

The Ministry of Health will begin to vaccinate against the coronavirus next 15 in schools, during school hours and with prior authorization from parents.

It will begin with special education schools and immunosuppressed minors and, subsequently, it will follow an order of age, starting with minors under 11, 10 and 9 years old. Then it will go down until the vaccination of 330,000 children from 5 to 11 years of the Valencian Community is completed. This Monday 150,000 pediatric doses will be received from Pfizer.

The Basque Minister of Health, Gotzone Sagardui, has indicated that the first vials of the vaccine against covid for children between 5 and 11 years old will arrive in the Basque Country on December 14 and from the 15th the vaccination will be launched in health centers .

Families must receive an SMS from the Basque Health Service to request an appointment. The administration of vaccines will be carried out progressively from the age of 11 and under depending on the number of doses available.

The vaccination of children will begin on the 15th and will be done “preferably” in schools, with an informed consent by the parents, according to the second vice president and counselor of the branch, José María Vergeles, who has said that outside of them should be an “exception”.

The objective is to vaccinate 11, 10 and 9 year old children before the 22nd day with the 30,000 doses that Extremadura will receive.

Galicia will receive in the first shipment of childhood vaccines against covid-19 a total of 60,000 doses that will be administered between December 15 and 18 to children between 9 and 11 years old, which represents almost half of the total number of minors who will start to vaccinate this month.

Vaccination will begin on Monday afternoon and will continue at the same time on days 16 and 17, while on Saturday 18 the administration of doses will be done morning and afternoon, so that on this day the immunization of children will be completed until 9 years.

It will be carried out in mass vaccination centers already enabled for the elderly and parents must provide informed consent, as happened with adolescents under 16 years of age.

The Community of Madrid will open the self-appointment system on Tuesday 14 to begin vaccinating children from 5 to 11 years old in twenty-five public hospitals in the region, in age groups from oldest to youngest.

In the first phase, priority will be given to children of 11, 10 and 9 years old, but if there are younger siblings in the same family unit, they will be able to attend together and it will only be necessary to request a single appointment to inoculate all the siblings at the same time.

To obtain the self-appointment, families only have to enter into the system the automatic personal identification code (Cipa) that appears on the health card, as well as the name and first surname of the minor and their date of birth. If the adult accompanying the minor is not legally responsible, he or she will have to present an authorization signed by the father, mother or guardian.

Murcia will enable mass vaccination points in large cities and rule out vaccinating in schools. According to the Ministry of Health, it is more agile to choose the vaccination points since it ensures that children are accompanied by their parents and, therefore, consent. The community will soon enable the web appointment for the group from 8 to 11 years old.

In Navarra, vaccination will kick off in rural areas and the next day in Pamplona and the region. In all cases, it is expected to be outside the school environment. It will start with older children and those with special situations and in the capital the vaccination point installed in the Seminar will be used.

The vaccination against COVID of the 22,000 La Rioja children between 5 and 11 years old will be carried out in schools from the 15th and will continue at the La Rioja Biomedical Research Center (CIBIR) during the Christmas holidays.

According to the Riojan government, children are expected to have an inoculated dose before the first half of February, and the forecast is to complete the second dose eight weeks after the first.

The vaccine presentation works on the details of the consent that parents have to sign, a letter that will be distributed from schools starting next week and on the Riojan government website.

The Ceutí Government has reported that the 8,129 minors between the ages of 5 and 11 will be vaccinated from the 15th in the afternoon and at the City Hall.

Until December 22 – the day scheduled for school holidays – the vaccination will be carried out in the afternoon so as not to interfere with classes and from that day on, also in the mornings. In addition, you will be vaccinated on weekends for family conciliation. Minors will have to be accompanied and carry a signed consent.

Melilla will vaccinate children at the Regional Hospital between Wednesday 15 and Thursday 23. The vaccination will be done in the afternoons, without prior appointment but reserving a specific day for each age, starting with those who are 11 years old and continuing in order falling.

Minors must be accompanied by their parents or guardians and provide a signed consent. Melilla, which has a census of almost 8,500 minors between the ages of 5 and 11, will receive 6,000 doses in the first batch.