Skip to content
Home News ‘Every kid now is carrying guns’: New Yorkers call on Biden to act as he visits city gripped by violence 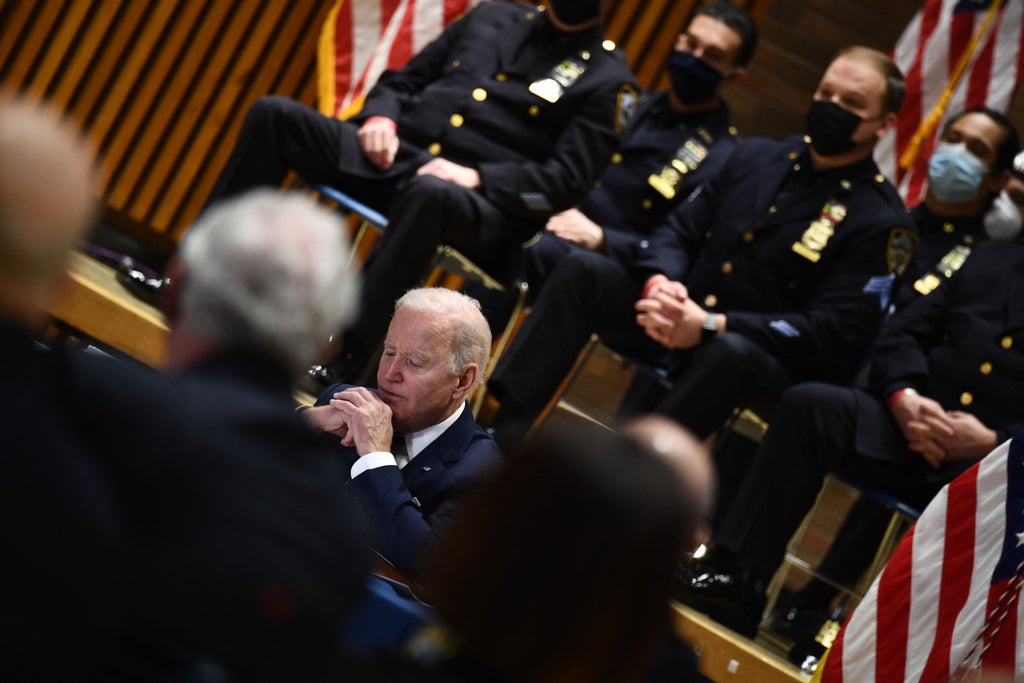 TOs President Joe Biden was touching down in Air Force One at John F Kennedy Airport on Thursday, Monica Hale was taking her 17-month-old grandniece for a walk past the NYPD’s 32nd Precinct in Harlem.

Ms Hale, 69, stopped in the rain to pay her respects at the memorials to slain officers Wilbert Mora and Jason Rivera, who were fatally wounded on 21 January after being called to a domestic violence incident nearby.

“These babies,” she says, gesturing at photographs of the fallen officers. “Just getting married, just starting out. It breaks my heart.”

Ms Hale’s apartment backs onto the police station, and she recalled helicopters encircling the skies and swarming police vehicles on the night of the shooting.

She no longer feels safe walking the streets at any time of the day or night, a sentiment echoed by more than a dozen residents of New York neighborhoods blighted by gun violence who spoke to The Independent on Thursday.

“You don’t come out at all if you don’t have to. A day like today is the best day because all of the crooks are inside. Damn right. They don’t like the rain.”

Ms Hale, a lifelong Harlem resident and team captain of the Harlem Honeys and Bears synchronized swim team, remembers all too well the crimewave of the 1980s and 1990s as crack cocaine became entrenched in her community.

A similar fear stalks the streets now, she says, and the perpetrators of gun violence are getting younger.

She worries a generation has been left behind by the pandemic, with many kids missing more than a year of lessons due to school closures.

With gun violence in New York spiking by 24 per cent compared to the same period last year, Mayor Eric Adams, Mr Biden and local and state law enforcement officials met on Thursday at NYPD headquarters to discuss how to combat the threat.

She would like to see city leaders go even further and hold negligent parents accountable for their children’s misdeeds, adding she would dob in her own kids “in a heartbeat” if they had committed a serious crime.

She plans to enroll her grandniece in the Harlem Honeys and Bears junior team as soon as she’s old enough.

A few hundred meters east at 119 West 135th St, another memorial has been set up outside the building where Officers Rivera and Mora were fatally wounded. It pays tribute to “all lives affected by the tragedy”.

Mary, 33, who wanted to be identified by her middle name, has lived in the building since the age of 15 and says residents of the rent-controlled building are mainly elderly and are living in fear since the shootings.

Like Officer Mora, Mary is Dominican and grew up in Washington Heights, and says the extended Dominican community in New York feels like one big family, adding that it almost feels as if she had lost a cousin.

She also knew 47-year-old Lashawn J McNeil, who authorities say ambushed both officers and shot them in the head with a stolen Glock 45 that had been modified with a “high capacity magazine” to carry 40 additional rounds, before he was shot dead by a third police officer.

It’s one of the thousands of homemade “ghost guns” – stolen firearms with serial numbers scratched off, usually purchased with no background checks – that President Biden pledged to crack down on during his visit to New York.

Mary says it’s a proud neighborhood where people respect the police, but it’s gone downhill since she was in high school.

“New York City wasn’t like this a couple of years ago. When I was growing up there were free school programs everywhere. There’s nothing these days. Instead the kids go to the streets and that’s that.”

She wished the President and the Mayor had come to Harlem to “have a conversation with the community.”

“They can talk as much as they want. We need action. Action for the youth, for the elderly, for the police officers, everyone needs protection.”

Fifty blocks north in the Bronx, there was a heavy police presence on the corner where infant Catherine Ortiz was seriously wounded after being shot through the left cheek as she sat in a parked car with her mother last month.

Catherine spent her first birthday in hospital recovering from brain surgery. A police cruiser idles on the spot where her blood-stained pink coat once lay.

Janae Castillo, 32, who is standing outside a deli on the corner of 198th St East and Valentine Avenue, said the violence had gotten so bad she was afraid every time her 13-year-old son Max left the house.

“Nobody wants to send their kids to the store when you could be sitting inside a car and get shot.”

She says there are no easy fixes to the spiraling violence, but blame a lack of social services and activities for youth in the area.

She tried to get Max into after school programs but says they were all full. So she pulled him out of the local school in grade four and sent him to a public school in Lower Manhattan where there were better options.

“What are the kids supposed to do?” she says.

“Their parents are working, there’s nobody home to watch them, they’re running the streets they’re doing whatever they want, there’s nothing for them.”

“Kids would rather be playing Connect 4 or checkers than playing with guns,” says Ms Castillo.

Grandmother Esther Santiago Rivera, who has lived in the neighborhood for 40 years, agrees the lack of social programs for youth is hurting the community.

A Muay Thai academy opened up a few doors down the street just before the pandemic hit, and then promptly shut down again, she says.

Across the road, deli owner Musa Adamu says the streets are mostly empty at night, and his business is “really really down”.

“Every kid now is carrying guns. It’s really bad. They’re 17, 15, and younger. It’s just the crazy. They need to get the guns off the streets.”

At My Place Family Pizza a couple of doors down, a television carries Mr Biden’s speech live from NYPD headquarters.

In it, Mr Biden pledged to New Yorkers that the federal government would step up its fight against gun violence by working more closely with police and communities to stop the surging bloodshed.

“Enough is enough,” Biden said to an audience of police, law enforcement officials and lawmakers gathered at the city’s police headquarters. “We can do something about this.”

But at the pizza store, no one is paying any attention to his remarks.

A 51-year-old who delivers pizza there, and only wants to be identified by his nickname Junior, tells The Independent: “I walk these streets every day, there’s a feeling of fear. I’ve lived here for 33 years and this is the first time I’ve felt it.

“I don’t feel safe in my own community.”

He had a simple message for the politicians: “Stop the gun violence.”