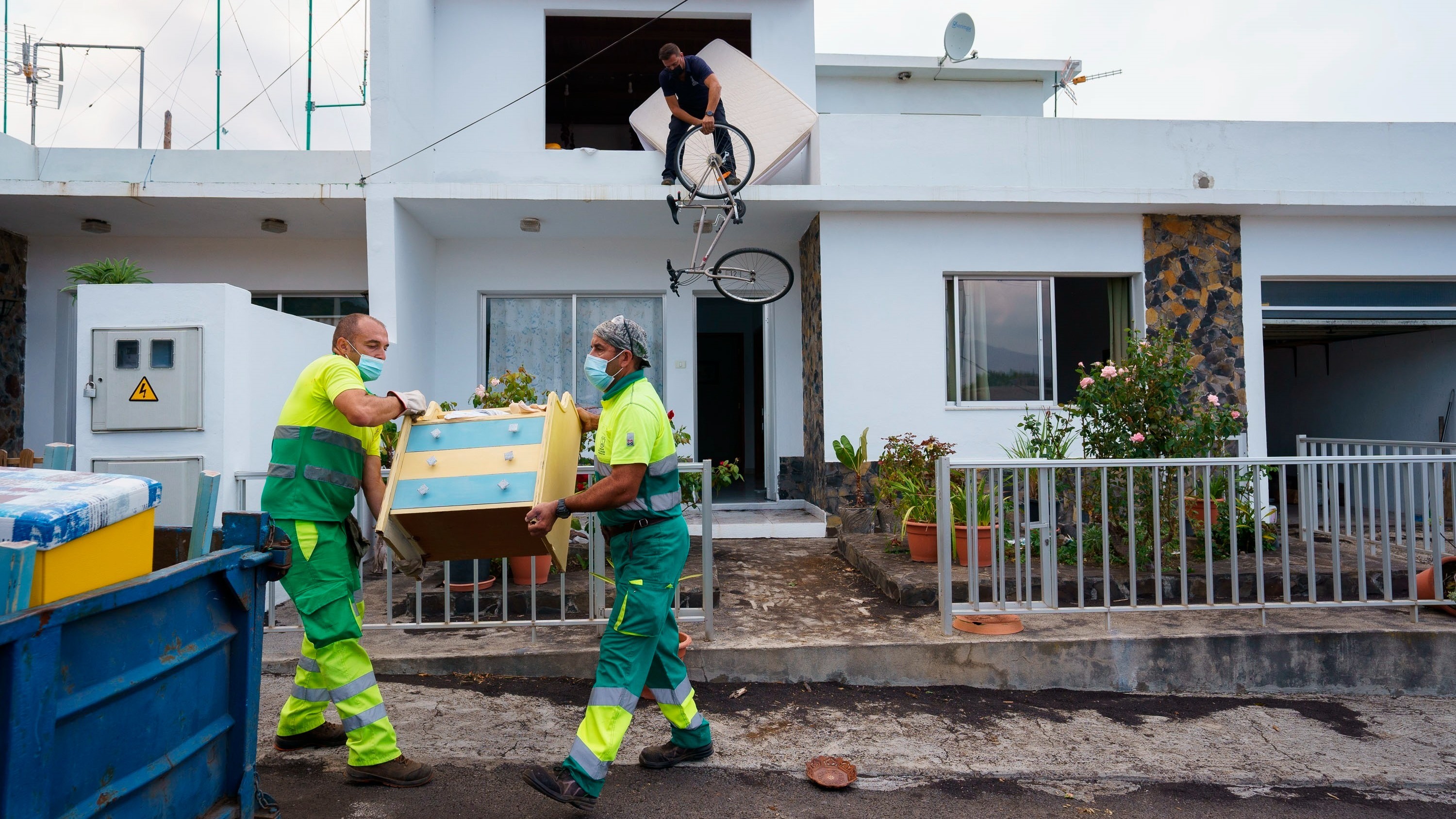 Since the volcano swallowed up his house in Todoque, Jose Luis Y Miguel Angel they have barely had a moment’s respite. They came out practically with what they were wearing, and they left behind everything they had, except a television, some clothes and the essential documents. Nothing more. Three months after that, José Luis’s voice still shrinks when he remembers that Sunday afternoon in September. Although now, for just over a week, he and his brother They live in a small apartment in the center of Tazacorte, where they seem to have found a part of that tranquility that was buried by the lava, along with their belongings.

Whenever they can, José Luis and Miguel Ángel travel by bus to Los Llanos de Aridane, to be closer to that neighborhood and that house that no longer exist. They spend the morning or afternoon there, and then return to the new home of Tazacorte, which is a few kilometers away. A pair of parakeets awaits them on the floor, which, like everything there, have just been given as gifts. “I love animals and I can’t live without them,” says Miguel Ángel. That is one of the things they miss the most about the Todoque house, where they lived surrounded by nature. Although the new apartment also has something from its previous home, since it is oriented towards a banana tree that floods everything with green when the blinds are raised. One of the things that is always surprising about La Palma is that banana plantations appear in the most unexpected places.

Despite its improvised character and extreme simplicity, the apartment is very cozy. Everything there smells of new and recent paint, and the brothers have even taken care of putting up a Christmas tree. The house is small, and consists of a kitchen, living room, two bedrooms and a toilet. They are grateful, but can’t help but compare it to Todoque’s lost home. “Only the kitchen of the house we lived in was bigger than this room,” says José Luis, looking over the walls.

The arrival in Tazacorte has also been a truce with respect to the darkest weeks that followed the awakening of the volcano. After the eruption, these brothers they stayed for two and a half months at the Teneguía Princess hotel in Fuencaliente, but there came a time when it became an ordeal. “We are much better here than at the hotel, because we couldn’t take it anymore. At first, I pretended we were on vacation, but there came a time when it was impossible, because it was many days,” recalls José Luis.

Some of the first relocated in houses

In fact, José Luis and Miguel Ángel can feel lucky, as they met the requirements to become one of the first families affected by the volcano to receive a home on La Palma. In the same block, another 16 flats have been turned over to people like them, including a sister.

So far, the Government of the Canary Islands has barely delivered 25 homes, although it plans to increase this figure considerably, also with prefabricated houses. In addition, it has opened an extraordinary line of rental assistance. For his part, the Spanish President, Pedro Sánchez, has promised to relocate more than 600 families. Although, after three months with nothing or very little, the distrust of the islanders towards the different administrations has become general, and a good part of those affected are looking for a home on their own, tired of waiting for those aids to materialize.

The two brothers have been offered the flat temporarily for a minimum of three years, but in principle they can stay for ten. The first year they will not pay anything, and the following two only the community fees, which amount to 17 euros per month. “From the fourth year on, I don’t know if the rent will go up, but we hope it will be more or less the same,” explains José Luis.

Although this new life in Tazacorte is a clear improvement in that obstacle course that the volcanic eruption has become for many palm trees, José Luis and his brother are very clear that they have not yet reached the goal. His greatest desire is to one day be able to return to Todoque, or at least to Los Llanos de Aridane, to be closer. “That is where we were born and it is our town, but they have told us that it cannot be at the moment. So we have to wait and see if we can return one day,” says José Luis with resignation.

“Every day I think about the house that I lost”

“Every day I think about the house I lost. They have offered us this apartment and I am very happy, but I have a great sorrow for not being able to be in my house in Todoque“He confesses. He is sitting on the sofa in the living room, next to his brother, and while he speaks he keeps his eyes lost on the banana forest that appears behind the windows.” I hope I can go back there, to be in the place where I i was born. If I can’t go back and they won’t let me build a new house, at least a small storage room, so I can go from time to time. To return even if it is only to spend the afternoon, work the field, have animals … “, he expresses, almost as if he were dreaming aloud.

“The house was made by a grandmother who has already passed away, and it seems unfair that because a volcano comes, they say that it cannot be built there to protect it. It is as if I were now watching my grandmother go hungry to build the house, and I I would like to be able to have again, even if it is that land, “he continues. “Now it is under the lava, but it is still our land, the place where we were born”he adds, unable to prevent his voice from shrinking again.