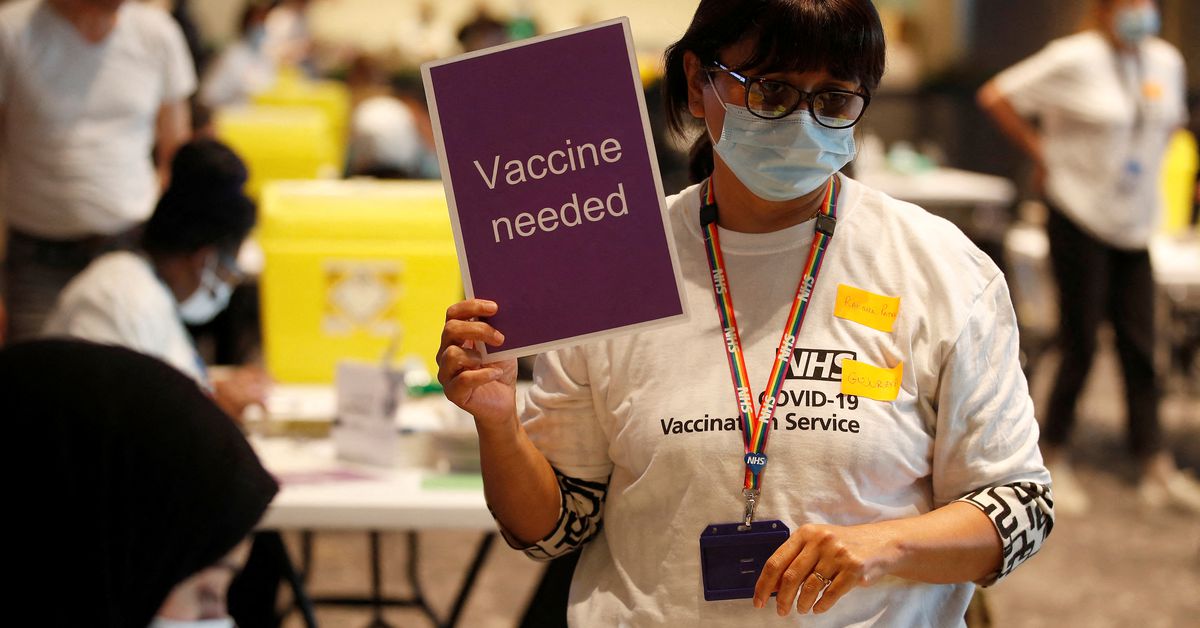 LONDON, Dec 20 (Reuters) – Britain refused to rule out curbs on gatherings on Monday, a day after the Netherlands imposed a fourth lockdown prompted by the fast-spreading Omicron variant of the coronavirus and as other European countries considered putting a squeeze on Christmas.

Omicron infections are multiplying rapidly across Europe and the United States, doubling every two or three days in London and elsewhere and taking a heavy toll on financial markets which fear the impact on the global economic recovery.

The variant was first detected last month in southern Africa and Hong Kong and so far been reported in at least 89 countries. The severity of illness it causes remains unclear.

Dutch Prime Minister Mark Rutte announced a shutdown on Saturday, ordering the closure of all but essential stores, as well as restaurants, hairdressers, gyms, museums and other public places from Sunday until at least Jan. 14. read more

Twelve people in Britain have died with the Omicron variant of the coronavirus, Deputy Prime Minister Dominic Raab said on Monday, refusing to rule out a tightening of social restrictions before Christmas.

“I just can’t make hard and fast guarantees,” he told Times Radio. “In assessing the situation we rely very heavily on the real data coming through and it will take a little bit more time to assess this critical issue of the severity of Omicron.”

See also  a trickle advance on the Ukrainian borders

Health minister Sajid Javid said on Sunday the government was watching the data closely. Any decision to limit how people can celebrate Christmas would come at a high political cost for Prime Minister Boris Johnson, whose authority has been undermined by questions over whether he and his staff broke lockdown rules last year. read more

The German government’s scientific advisory panel said in a statement on Sunday it was necessary to further limit contact, with data so far showing that boosters alone would not be enough to contain the spread of the virus.

The state premier of North Rhine-Westphalia, Hendrik Wuest, did not rule out contact restrictions on people who have been fully vaccinated or had a booster shot.

“We should be careful about ruling anything out,” he told broadcaster ARD on Monday.

Ireland on Friday ordered bars and restaurants to close at 8 p.m. and reduced the capacity in all public events. Italy is also considering new measures to avoid a surge in infections, newspapers reported on Sunday.

Stocks fell and oil prices slid more than 3% on Monday.

S&P and Nasdaq futures fell 1.3%, pointing to a lower Wall Street open, after U.S. Senator Joe Manchin, a moderate Democrat who is key to President Joe Biden’s hopes of passing a huge domestic investment bill, said on Sunday he would not support the package.

“Omicron … remains one of the biggest issues for markets right now and has significantly clouded the outlook moving into year-end,” Deutsche Bank analysts said in a note, adding that Manchin’s stance “marks a significant blow for President Biden’s economic agenda”.

Israel added the United States to its “no-fly” list, citing concerns over the Omicron variant. U.S. infectious disease expert Anthony Fauci said Omicron was “raging through the world” as he urged Americans to get booster shots.

Since the start of the month, U.S. COVID cases have risen 50%, according to a Reuters tally.

New York state recorded its third straight day of record cases with more than half in New York city, where Mayor Bill de Blasio called for the country to “go on a war footing” to fight the Omicron variant with vaccinations.

Booster shots, on top of two-shot vaccinations, appear key to fighting the variant. Moderna Inc (MRNA.O) said on Monday that a booster dose of its vaccine appeared to be protective against Omicron in laboratory testing, and that the current version of the shot would remain Moderna’s “first line of defence”. read more

Australia for its part is pushing to ease curbs despite a predicted surge in infections, hoping inoculations will help keep people out of hospital. read more

Eikon users can click https://apac1.apps.cp.thomsonreuters.com/cms/?navid=1063154666 for a case tracker.

See also  Independent Schools Guide: Getting geared up for a bit of show and tell