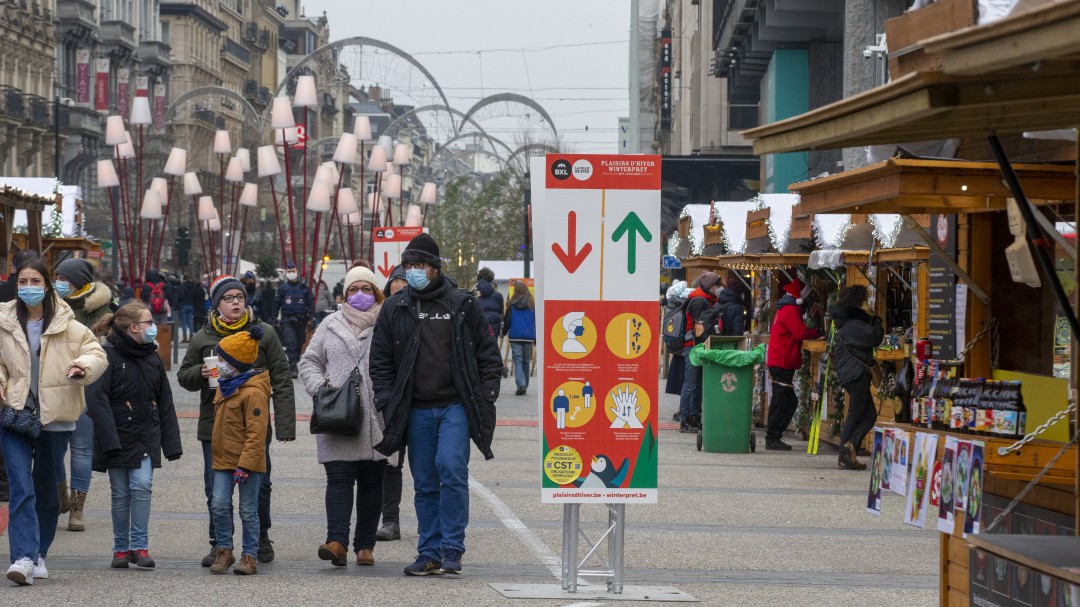 Belgium releases new sanitary restrictions this Sunday due to the advance of the variant of the omicron coronavirus, which include the closure of cinemas, theaters and concert halls and emptying the stands of the stadiums and that have put the culture sector on the warpath. The supplementary measures are applied when Belgium registers a cumulative incidence of 1,094 points, with a weekly decrease in infections of 36% that has remained constant since the end of last November.

Belgian Prime Minister Alexander de Croo, whose federal government agreed on the measures with the Flanders, Wallonia and Brussels regions, on Wednesday justified the decisions out of prudence in light of the new omicron variant, which is known to be more transmissible than delta. The objective, said the Flemish liberal, is to “slow down the progress” of omicron, “manage the pressure on the hospitals” and guarantee that the schools will open on January 10. But the new health protocols, which provide for exceptions such as museums, libraries or places of worship, have exacerbated the culture, leisure and sports sector, which have called a protest in Brussels this Sunday.

Some rooms will disobey the measures

Some cinemas, such as the Grignoux cinemas in Liège and Namour or the Toison d’Or theater in Brussels, have announced that they will disobey the authorities in response to an “inept” decision, while associations such as the League for Human Rights or The Federation of Performing Arts Employees is preparing legal actions against the closures.

Discontent with the federal and regional authorities of Belgium, a country that for more than a month and in the face of the increase in infections began to reinforce the measures with demands such as the closing of bars and restaurants at night and the obligation to telework at 80% It also transcends the academic and scientific community. The misunderstanding has been joined by the rectors of the country’s francophone universities to renowned virologists such as Marius Gilbert, Yves Van Laethem or Emmanuel André, who have warned of the scant health “sense” they have and the risk it entails in terms of trust if at some point it would be necessary to resort to an “emergency brake”. The prime minister said on Friday that the measures will be reassessed in January.

New restrictions to curb the spread of the omicron variant of the coronavirus have come into force this Sunday in Scotland, Wales and Northern Ireland, while the British central government weighs the possibility of expanding the limitations in England. As of this morning, groups of more than six people cannot meet in pubs, cinemas and restaurants in Wales, which does not allow events of more than 30 people indoors and 50 outdoors. In public spaces and offices, two meters of interpersonal distance are required.

Scotland for its part limits social gatherings to people from three coexistence centers, requires one meter of distance between groups and limits outdoor events to 500 people, and between 100 and 200 outdoors, so large sporting events should be held without an audience in stadiums. In Northern Ireland, too, various restrictions come into force between today and tomorrow. Socialization is limited to people from three households in public places, where two meters of distance must also be kept, among other measures.

British Prime Minister Boris Johnson continues to assess the severity of the omicron disease before deciding whether to pass new rules to prevent infections, measures that would eventually be applied in England. In the UK as a whole, more than 122,000 cases were reported on Friday, the highest number since the start of the pandemic. The British Government will update the data on the advance of the virus tomorrow, Monday.

Since the middle of this week, France has been registering record cases of coronavirus every day. This Saturday, it exceeded the threshold of 100,000 contaminations, days after the French Government warned that this figure would be reached quickly because of the omicron variant. The weekly incidence rate rebounded to 597.8 cases per 100,000 inhabitants and the occupancy of ucis beds by covid patients grew by about 30 people, to 3,282, still far from the peak of 7,000 in April 2020.

Italy registers more than 50,000 cases in one day

Italy registered a new record of coronavirus positives in the last 24 hours with more than 50,000 cases, also with the maximum number of tests carried out to date, and counted 144 deaths, according to data from the Ministry of Health. The latest data registered 54,762 new cases of coronavirus compared to 50,599 on Friday and therefore rises to 5,622,431 the number of people who have contracted the SARS-CoV-2 virus since the pandemic began, as well as a total of 136,530 victims since February 2020.

The positives drop in Germany and Russia

The good news comes from Germany and Russia, which have reduced their number of daily infections. The seven-day cumulative incidence in Germany has dropped this Sunday to 220.7 new infections per 100,000 inhabitants, a value that stood at 242.9 on Christmas Day and 315.4 a week ago, according to the Institute of Virology Robert Koch (RKI).

In the last 24 hours, the Health Offices informed the RKI of a total of 10,100 new infections and 88 deaths from covid, while a week ago they registered 29,348 and 180, respectively. The RKI had already warned that, due to the reduction in work activity motivated by holidays, the cases officially registered these days were only going to offer an incomplete picture of the epidemic situation. According to the private channel NTV, 38% of the 411 districts that exist in Germany have not reported any new contagion in the last 24 hours, and the federal state of Lower Saxony (north) has not provided data on this either. time frame.

German health authorities believe that the downward trend in recent weeks reflects the remission of the fourth wave, linked to the Delta variant. However, Health Minister Karl Lauterbach has predicted that there will be a fifth wave, caused by the omicron variant, which will spread rapidly in the first weeks of January. The RKI has already registered cases of omicron in all the federal states and a deceased due to this covid mutation, which according to experts is much more contagious than the previous ones.

Germany shields itself from tourists

However, Germany has considered Spain, Portugal and the United States as high-risk areas for coronavirus since midnight and has tightened restrictions for travelers entering from those countries as a measure to avoid the importation of cases after the moderate decrease in infections of the last days. The German Government had announced on Thursday the inclusion of these three states, in addition to Finland, Monaco and Cyprus, in the list of countries considered high risk, which contemplates a ten-day quarantine that can be shortened by presenting a negative test after five days from arrival in Germany.

To enter Germany, every traveler over the age of six who has been in a country on this list in the last ten days must present a certificate of having received the complete schedule of the covid vaccine or of having overcome the coronavirus or well a negative test. Meanwhile, Austria, Serbia, Bosnia and Herzegovina, Belize and Malaysia ceased to be “an area with a particularly high risk of contagion due to the wide presence of a certain variant of SARS-CoV-2”. This list includes, in addition to the recently incorporated countries, another fifty, including more than half of all those in the European Union, and for Latin America, Mexico and Venezuela.

The pandemic in Russia improves

Russia has registered fewer than 24,000 daily cases of COVID-19 for the first time in more than two months, while for the third consecutive day the deaths from this disease did not reach a thousand, the country’s health authorities reported today. According to official data, 23,721 new infections and 968 deaths from covid were reported on the last day, figures that confirm a downward trend in incidents.

The highest number of positives was registered in Moscow (2,118), Saint Petersburg the second city in the country, (1,851) and the Moscow region (1,565). 71 patients died in the Russian capital; in Saint Petersburg, 64, and the Moscow region, 52. Since the beginning of the coronavirus pandemic, the country accumulates 10,392,020 cases of COVID-19 and 304,218 deaths from this disease, although the official data for excess deaths double practically that number.

So far the Russian authorities have reported only 41 cases of the new omicron variant and have imposed restrictions on the entry of foreigners from Hong Kong and some southern African countries.