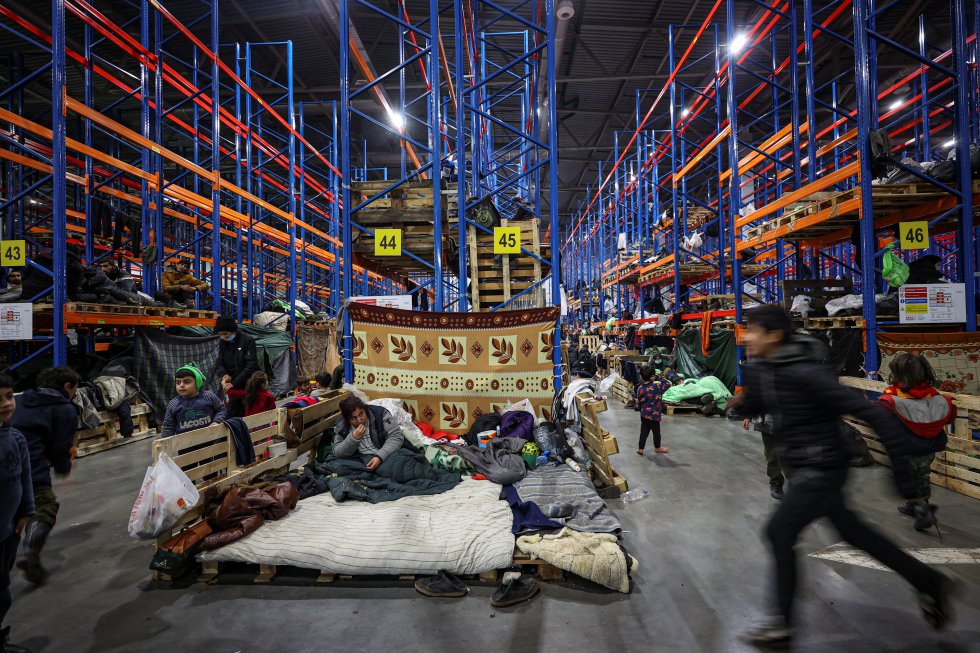 The European Commission has approved this Tuesday a sanctions regime specifically aimed at punishing companies that, intentionally or not, participate in the artificial creation of migration crises along the borders of the EU. The new black list was born in response to the transfer of migrants orchestrated by the Belarusian leader, Alexandr Lukashenko, to destabilize Poland, Lithuania and Latvia. And it comes after successive attempts to deliberately provoke migration crises by neighbors such as Turkey, Libya or Morocco.

“We can do a lot with this new standard, but let’s hope we don’t have to use it,” says the European Commissioner for the Interior, Ilva Johansson, during a meeting with EL PAÍS and a small group of European media. “This new legal basis is the answer to a new method of human trafficking.” The objective of the rule is to prevent airlines or other means of transport from facilitating the arrival of migrants to a neighboring country that only seeks to pressure the EU, but does not concern the people or organizations that help or rescue potential refugees.

Unlike other sanctioning regimes in Brussels, the new one does not require a direct link between the sanctioned company and its intention to attack the EU. It will be enough for a company’s services to be used by an aggressive regime for it to be sanctioned, even if it simply limits itself to maintaining its normal operations. Once the new regime comes into force, the transport companies employed to start this trafficking in persons will be exposed to their activities on the Community market prohibited.

The mechanism is articulated through a Regulation that will establish a black list of companies that, in the opinion of the EU, are involved in illegal human trafficking. Inclusion on this list will carry serious penalties to the point of losing access to the Community market.

In the case of airlines, the veto will prevent them from landing or taking off at EU airports, not even for stopovers or refueling. They will also be prohibited from flying over European airspace. The set of prohibitions makes it practically impossible for any international airline to lend itself to being used by regimes such as that of Belarusian leader Alexandr Lukashenko, since they would lose access to a market and airspace as crucial as the European one.

For the first time, moreover, Brussels follows in the wake of Washington and arrogates to itself the power to sanction companies from countries outside the EU’s conflicts with other states. The EU had been complaining for years about the extraterritoriality of the sanctions imposed by the US against Iran or Cuba, which have forced European companies to give up business in those countries so as not to risk being punished.

But the new European regime will also be able to hit companies from third countries even if they are not complicit in human trafficking and simply keep their usual transport services. Airlines, shipping companies or railway companies could be in the spotlight because the legal basis of the new regime is the articles of the Treaty (90 and 100.2) relating to the common transport policy.

Brussels thus begins to try to distinguish between migratory crises as a result of natural phenomena (such as an earthquake or floods) or political (wars or ethnic cleansing) and artificially fed flows to destabilize the external border of the EU.

That kind of hybrid attack isn’t new. Since the International Refugee Convention was signed in 1951 and until 2016, 75 attempts to exploit population displacement as a political weapon have been registered worldwide, according to the count of Professor Kelly M. Greenhill collected in a collective study of the ECFR (European Council on Foreign Relations). But in the last two years, the frequency of attacks against the EU appears to have increased.

In February 2020, Turkey threatened to unleash a flood of Syrian refugees towards the Greek borders as a measure of pressure in various negotiations with Brussels. The forceful response of the EU, which helped Athens to shield the borders, and the arrival of the pandemic cleared the threat from Ankara. In May of this year, it was Morocco’s turn to allow or encourage the entry of more than 8,000 people, many minors, into the Spanish territory of Ceuta. The EU closed ranks with Spain and helped neutralize a migration crisis caused in response to various rampages between Rabat and Madrid, including those related to the Sahara and the Polisario Front.

And since June, Lukashenko has made his country a priority destination for people from third countries who aspire to reach the EU. “The one who has been described as the last dictator in Europe has not only dedicated himself to repressing his own people, but has also started selling tickets that supposedly gave the right to enter the EU,” laments Johansson. “Belarus is a country to flee from, not to which no one wants to fly,” says the European Commissioner as proof that Lukashenko’s country was not spontaneously enduring foreign migratory pressure but was encouraged by the Minsk authorities.

Johansson assures that Lukashenko’s deception has cost potential migrants “between 10,000 and 20,000 euros per trip” and that, once in Belarus, “they have even endured death threats [por parte de las fuerzas de seguridad bielorrusas] to force them to try to cross the EU border ”.

The European Commission immediately mobilized to cut off the flow of Afghans, Syrians, Iraqis and other nationalities that Lukashenko was carrying. On a whirlwind tour, Commission Vice President Margaritis Schinas persuaded countries of origin and transit to stop departures. One after another, the airlines applied the ban on boarding for Belarus to citizens from the countries used by Lukashenko as a source of his human ammunition.

The new sanctioning regime will allow an even more expeditious response to future migratory crises because it will be possible to sanction companies that are reluctant to cut off human trafficking. The EU thus shields itself against a type of migratory crisis provoked that in the last seven decades, according to the count of Professor Greenhill, has allowed its inciters to achieve part of their political objectives in 75% of the cases and or an almost complete victory by more than half. Too high a risk of extortion that Brussels does not seem willing to continue assuming.