Skip to content
Home News Ethiopia: EU fears a migration crisis of historic dimensions in the Horn of Africa | International 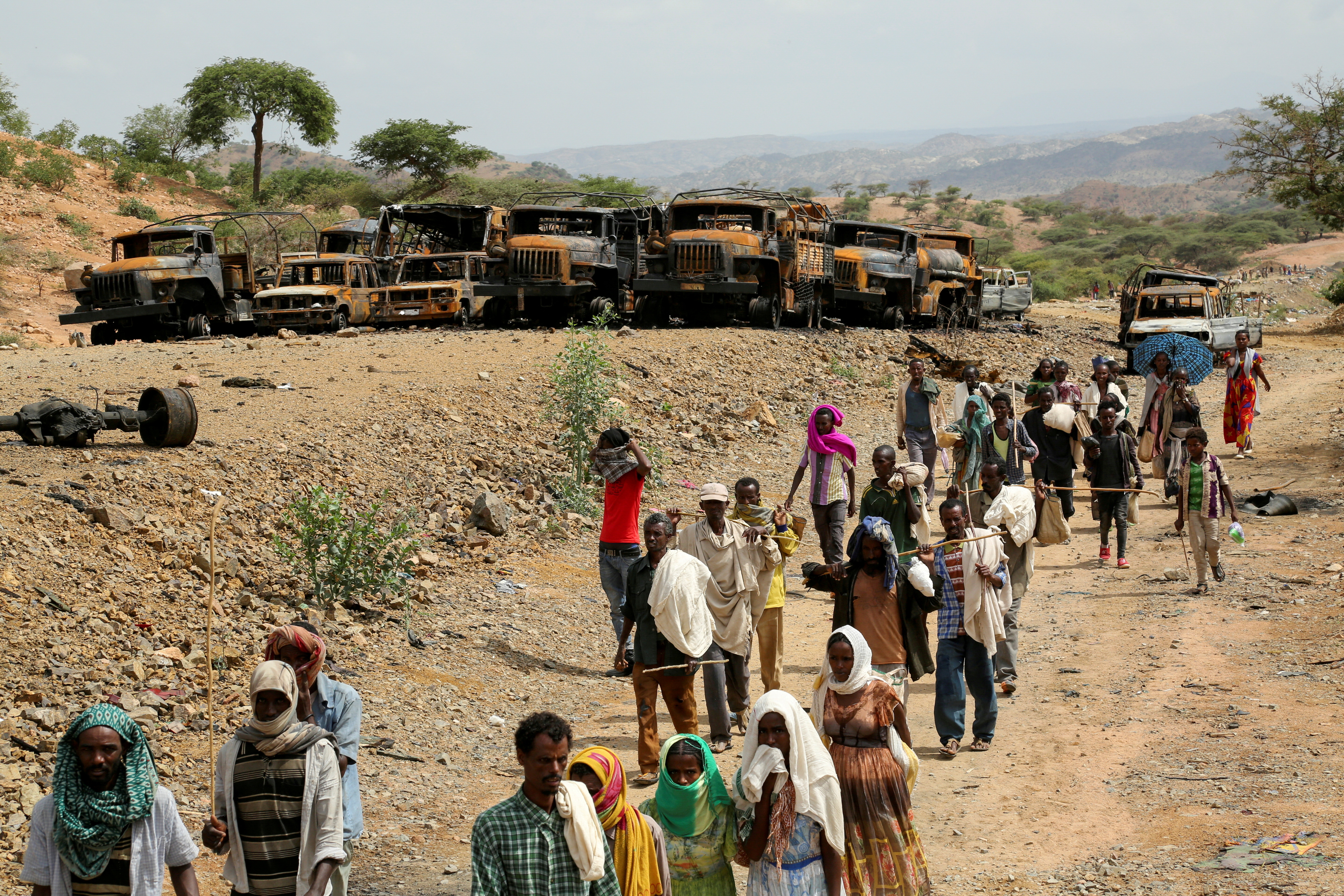 Brussels fears that the armed conflict in Ethiopia will degenerate in 2022 and cause a human catastrophe and a migration crisis of historic proportions. Community sources warn of the risk that the war will destabilize the entire Horn of Africa, an area where more than 200 million people live and already undergoes the stress of gigantic internal population displacements. The United States has imposed sanctions on some of the Eritrean authorities and companies involved in the armed clash. But in the European Union there has been no unanimity to adopt measures, despite the recognition of the risk of a spiral of violence that destabilizes the entire area.

“The situation in various parts of Africa is worrying and may give us a scare in the coming months,” says a European diplomatic source. The same source points to the war in Ethiopia, where rebels in the Tigray area, in the north of the country, are facing the federal army, as one of the great sources of concern for 2022.

Brussels fears that the Ethiopian conflict will further poison and end up dragging other countries in the area such as Sudan, South Sudan or Somalia, as well as Eritrea, already clearly involved. Community sources point out that the outbreak of the area would cause “a migratory exodus of historical proportions comparable to that of the breakup of Yugoslavia.”

That dismemberment from 1991 caused population movements that affected more than three million people and almost one million sought refuge in the countries of the European Union. The demographic shock was of such magnitude that European countries modified the indefinite nature of refugee status and replaced it with temporary protection considered merely emergency.

Europe was overwhelmed despite the fact that the former Yugoslavia had only 23 million inhabitants. But Ethiopia, the epicenter of the conflict in the Horn of Africa, is a giant of 112 million people. And it is surrounded by countries like Sudan (45 million), South Sudan (16 million) or Somalia (16 million), which already suffer enormous internal tensions.

In Sudan, 6.2 million people need humanitarian assistance in the Darfur area, according to the internal report that the European Commission periodically prepares on the alert situation of migratory movements. And in Somalia there are 2.9 million displaced people, according to the same report, dated December 15.

Forced population displacements could destabilize an area already hit by other armed conflicts, droughts and famines. And although the geographical distance from the EU is much greater than in the case of Yugoslavia, Brussels considers it likely that part of the migratory flows will move to the Old Continent through, above all, Libya.

“Ethiopia is experiencing one of the bloodiest wars that are being fought at the moment on the planet,” say community sources. And they show their concern for the peaceful subsistence of the area “even when the war ends.” The conflict, according to data from the European Commission, has already caused the displacement of more than two million people and thousands have sought refuge in Sudan. The Sudanese authorities have already threatened to provoke a massive departure of migrants bound for Europe or the United States.

Since the beginning of the crisis in northern Ethiopia in November 2020, the EU has provided € 70 million in humanitarian aid. For 2021 it had budgeted up to 85 million more. And in September this year, the EU activated an airlift that has carried up to 15 tonnes of food and health supplies to the Tigray area, the hardest hit by the conflict. Diplomatic sources acknowledge, however, the growing difficulties in channeling aid to the most needy population, given the violence and isolation of important areas of the country.

“The famine affects more than nine million people in northern Ethiopia,” said the EU’s High Representative for Foreign Affairs, Josep Borrell, in mid-December after presiding over a meeting of EU Foreign Ministers at the that the dramatic situation in the Horn of Africa was addressed. “Ethiopia is one of my biggest frustrations because we are not able to react adequately to a large-scale violation of human rights, mass rapes, the use of sexual violence as a weapon of war, assassinations and concentration camps based in the ethnic origin ”, assured the head of the European diplomacy.

Borrell has tried in vain to impose sanctions against those responsible for the greatest atrocities, but has not achieved the necessary unanimity of the 27 countries of the Union to approve them. The Ethiopian crisis will also hover over the summit that the EU hopes to hold in February 2022 with the African Union. It is an appointment devised to highlight the importance that Brussels attaches to the relationship with the neighboring continent, but which will be marked by the faltering European presence in the most conflictive areas (such as the Sahel or the Central African Republic) and the will of other powers (Russia, above all) to occupy the European void.

The Ethiopian conflict is in a kind of impasse after in recent weeks the federal army has managed to stop the advance of the Tigrayan rebels towards the capital, Addis Ababa, forcing their withdrawal towards the Tigray region. On the 23rd, the Ethiopian Government spokesman, Legesse Tulu, assured that, for now, the army had no intention of penetrating Tigray and that it had orders to stay in the neighboring regions of Amhara and Afar. “According to our current assessment, the enemy has been severely beaten and is no longer able to carry out his wishes,” Tulu said. The UN has accused both sides of committing war crimes and serious human rights violations.

The war, which has caused thousands of deaths, some two million displaced from their homes and some 9.4 million Ethiopians in need of help, erupted in November 2020 when Prime Minister Abiy Ahmed, the 2019 Nobel Peace Prize winner , accused the Tigray People’s Liberation Front (TPLF), which governs this northern region, of having attacked two Ethiopian military bases. However, the tension between the two sides had been mounting since Ahmed came to power in 2018 and began to displace TPLF members from the main institutions. In 2020, Ahmed decided to suspend the elections due to the pandemic, but the Tigrayans held regional elections in September, in a clear challenge to the central power wielded by Ahmed.

The first three weeks of the war saw a constant advance of the federal troops towards the north, managing to penetrate in the region of Tigray after the bombing of its capital, Mekele. Ahmed, who has had the support of Eritrean troops, even announced the end of the conflict. However, the Tigrayan rebels reorganized and, after a few months of relative calm, launched a counteroffensive in June that first penetrated the neighboring regions of Amhara and Afar and later reached just 200 kilometers from Addis Ababa, with the support of groups. armed with other ethnic groups, such as the Oromo. But the reaction of the federal army, with Ahmed himself posted to the front for two weeks, managed to halt this advance at the end of November and force the withdrawal of the TPLF to its fiefdom of Tigray.

As the war rages on in Ethiopia, neighboring Somalia faces a serious institutional crisis. Heavily armed military personnel were installed on Tuesday in strategic sectors of the capital, Mogadishu, and troops loyal to Prime Minister Mohamed Hussein Roble, camped near the presidential palace after the president, Mohamed Abdullahi Mohamed, known as Farmajo, dismissed the first for an alleged case of corruption. This Wednesday, Roble had a telephone conversation with Molly Phee, US Undersecretary of State for African Affairs, in which she discussed the political situation in Somalia and issues related to security and elections.

The tension between Farmajo and Roble had been on the rise in recent months. At the root of the problem is the delay in the Somali general elections, scheduled for February this year, and which the president decided to postpone until 2023, extending his term for two more years than planned and plunging the country into a serious crisis. Both the opposition and a part of Farmajo’s allies they described this postponement as “a threat to stability, peace and unity.”

The European Union and the United States threatened to sanction Somalia, a deeply divided country that lives under the constant threat of jihadist violence. The president has already withdrawn the prime minister’s powers to organize these elections before suspending him from his functions. Roble accuses Farmajo of trying to carry out a coup.