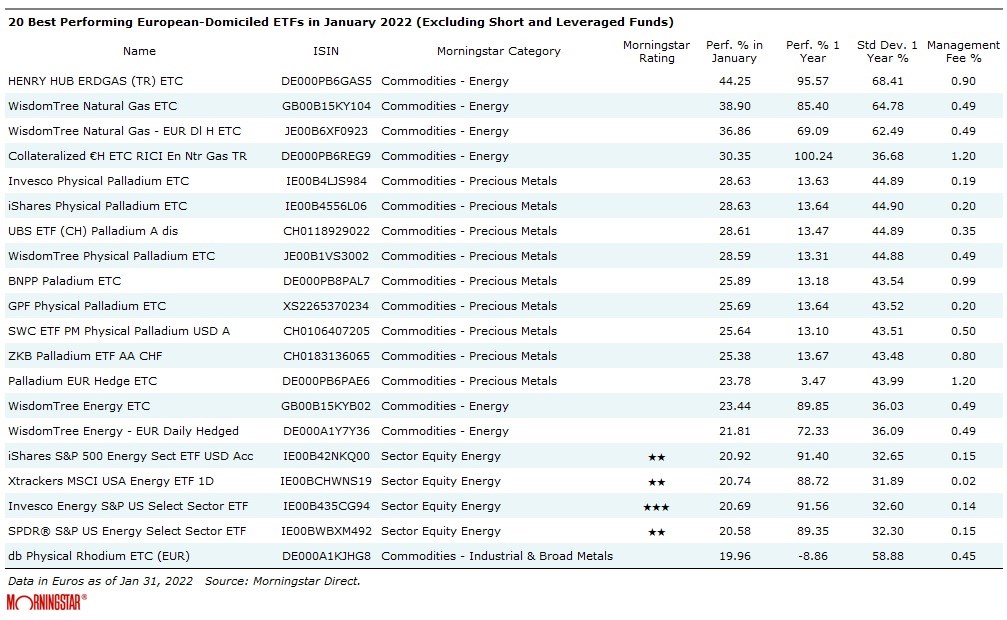 The top 20 of ETPs is led by Henry Hub Erdgas ETC (BNQ9), which rose 44% in January. This is a collateralised exchange-traded commodity incorporated in Germany that tracks the rolling Henry Hub Natural Gas Futures. Henry Hub is a distribution center in Louisiana, and the US is facing its own supply squeeze that is having an impact on the global energy complex. After a sudden drop in US natural gas production earlier this year, output continued to stumble through the end of January, threatening the balance of the domestic market just as colder weather arrives.

The Henry Hub ETC was followed by WisdomTree Natural Gas (NGAS) is in second place with a monthly gain of 38.90%. Soaring natural gas prices have been blamed on multiple factors: cold weather in the US, the economic recovery, general gas production and storage issues, OPEC, geopolitical tension with Russia, and so on. “But the true source of this looming crisis is long-term underinvestment in a globally diversified, stable long-cycle supply base”, says Nick Stansbury, head of climate solutions at Legal & General Investment Management LGIM. “Such uncertainty is likely to keep domestic investment down, particularly in Europe, which in time raises the chance of prolonged shortages globally. The US gas market may see this policy impact fall through to some significant long-term pricing support, as we see a global relinking of energy markets.”

“Much of the crisis in Europe is our own fault”, adds Stansbury, “the region has underinvested for a long time and demonized domestic gas supply, while doing little to address demand. That has only heightened its dependence on foreign gas supply. We expect that dependence to continue to grow, and quite rapidly, to at least 2030.”

With both Brent and WTI crude hovering around $90 a barrel at the end of January, there were 10 energy-exposed ETFs out of 20 in the top performers’ list. According to the International Energy Agency’s latest Oil Market Report, global oil demand in 2022 will exceed pre-pandemic levels and reach 200,000 barrels per day.

With a 28% rebound in its spot price, palladium recorded in January its best month since February 2008. The metal is used in catalytic converters to reduce harmful emissions, and tightening environmental regulation is forcing car makers to put more into each vehicle. Moreover, tensions between Russia and Ukraine, with a possible interruption of supplies by Moscow, probably supported the valuations of the white metal in these first weeks of the year. 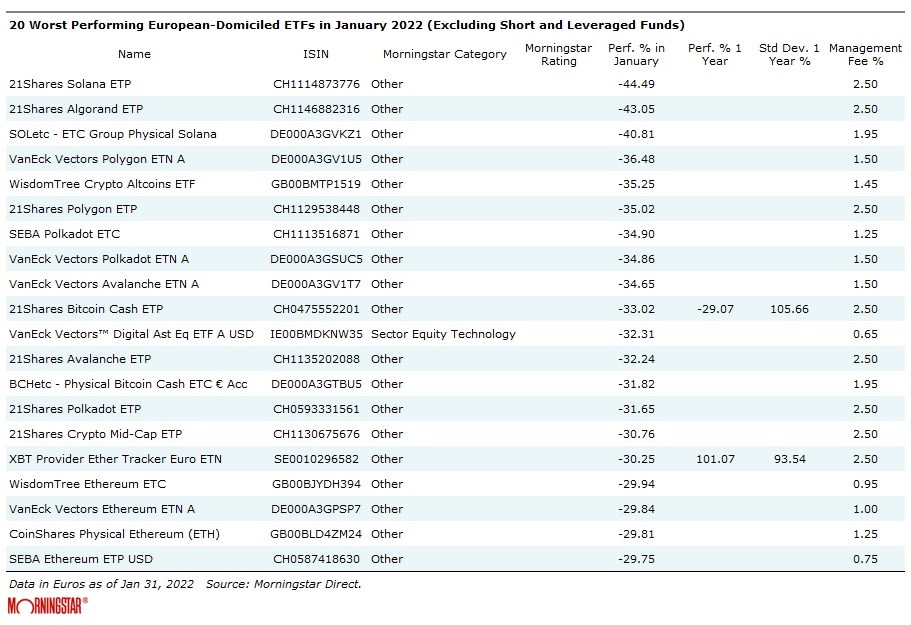 The biggest losers last month were products exposed to cryptocurrencies. 21Shares Solana ETP (ASOL) topped the list of the laggards, falling 44.5%. Solana is a blockchain project that has generated a lot of publicity in recent months. Despite losing nearly half its value in a month, Solana is up more than 1,600% over the last year (in euros, as of February 4).

Since mid-November 2021 most cryptocurrencies have seen their prices collapse. Just two months after reaching an all-time high of nearly $70,000, Bitcoin has halved, touching $35,000 in January 2022. Ethereum has been on the same arc, collapsing to around $2,400 from almost $5,000 in November. Overall, the great cryptocurrency crash wiped out $1.5 trillion from the sector.

Meanwhile, in recent weeks there has been renewed talk of possible regulation of the crypto world by the authorities, starting with the White House. Indeed, the Biden administration reportedly is preparing an executive order concerning cryptocurrencies, stablecoins, and NFTs to be issued in February.

The purpose of increased financial regulation would be to protect investors, prevent fraudulent activity, provide clear guidance, and address environmental concerns related to crypto mining. Any intervention is likely to cause more price volatility in the short term. 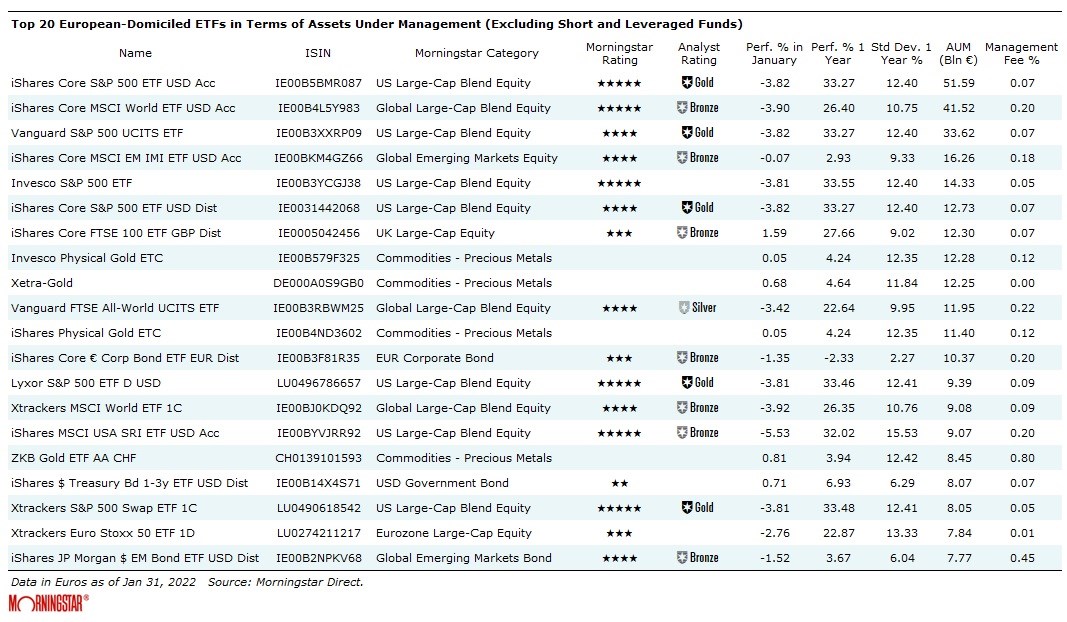 Monthly top and bottom performers are often very volatile and risky products, which should play a satellite role in your portfolio. Below you have an overview of the biggest European-domiciled ETPs in terms of assets, which could be more appropriate to consider among core holdings. Performances in January 2022 range from 1.59% for the iShares Core FTSE 100 UCITS ETF GBP (ISF) to the iShares MSCI USA SRI UCITS ETF USD (SUAS), which lost 5.53% last month.

According to Morningstar data, there are about 89 percentage points between the best and worst performing European exchange-traded products (ETPs) in January, with returns for the month ranging from 44.3% to -44.5%.

We have looked at the key trends in the first month of the year, excluding inverse and leveraged funds. These instruments, being purely passive products, reflect the evolution of the markets without the bias (good or bad) of an active manager.