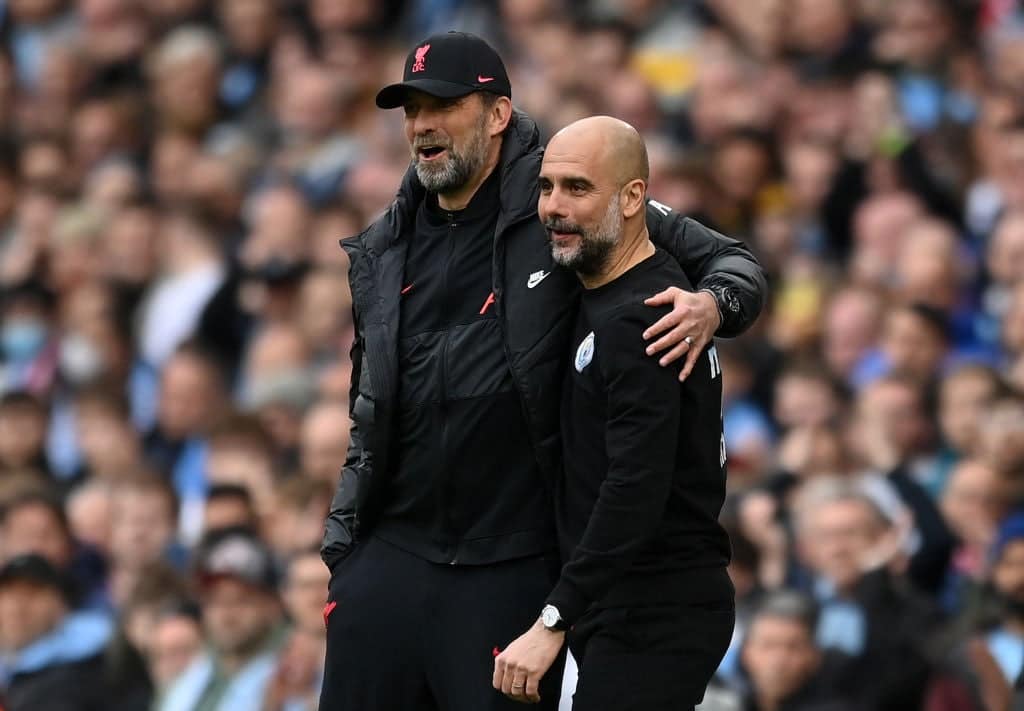 Before this new chapter in English football’s defining rivalry of the decade, comparisons were drawn with the last two clubs to dominate the landscape to this extent.

For many, Manchester United and Arsenal in the late 1990s and early 2000s had it all. There was the brilliance of Thierry Henry and Ryan Giggs. The raw aggression of Roy Keane and Patrick Vieira. The open hostility between Sir Alex Ferguson and Arsene Wenger. They all threw a load of pizza over each other once too.

By contrast, their modern equivalents Pep Guardiola and Jurgen Klopp have been known to text each other congratulations after their greatest accomplishments. There is a healthy respect between Manchester City and Liverpool’s players. There is no record of a post-match food fight to our knowledge. It is a friendlier duopoly, to a degree.

There is still an edge. You have the Kopparberg bottles and the broken bus. Raheem Sterling and Joe Gomez’s contretemps in the St George’s Park canteen. But it says everything that, rather than pre-match set-tos in the players’ tunnel, the most serious flashpoint between these two clubs over the past few years is the alleged hacking of a scouting database.

This rivalry is an altogether different beast from those of old. It is a 21st century rivalry. It is decided by finely-tuned algorithms as well as moments of artistry, in air-conditioned offices as much as on the training ground. And when you swap some of the mud, blood and guts that we used to know for a culture of marginal gains, battles are won and lost along those lines.

That’s an old cliché of course – that football is about ‘fine margins’ – but that has never been truer of a rivalry during the Premier League era than the one between Guardiola’s City and Klopp’s Liverpool. Indeed in their case, it is not only league titles which are decided along the finest and faintest of lines but the substance of their legacies too. Both of these teams and managers will be remembered as greats. Both could be greater.

If not for the 11.3mm that separated the ball from the goal-line on that night here in early 2019, it is entirely possible that Klopp would have two titles rather than one, ending the long wait even earlier. Instead, Guardiola can almost boast a clean sweep. Almost. Klopp’s Liverpool would have a strong claim to being the post-1992 era’s best if City were not around. If Liverpool were not around, City would have an open and shut case.

One statistic dominated the build-up to this game. Since the start of the 2018-19 season, City had won 338 points. Liverpool had won 337. Over four seasons until today, there really was just a Rizla paper between them. It is remarkable, even before you consider those total points that they have amassed are among the highest ever seen, and that inability to separate the two colors and shapes their meetings.

The beauty of these contests, compared to those of United-Arsenal, is that they are finely balanced to a point where the slightest adjustment, hesitation or error at any moment can be the difference between victory and defeat and much more on top. That’s why, midway through the first half, Guardiola briefly took up the right-back position, straying beyond the white line and onto the pitch to direct his players on one possession, getting chalk on his brothel creepers.

It’s also why just two minutes into this pulsating 2-2 draw, Kevin De Bruyne was maniacally barking instructions to his fellow forwards while in the middle of triggering a high press, fixing things on the fly, in the hope of getting that slightest nick on the ball that might turn it in his favour. It was that kind of energy and intensity that led to him scoring the breakthrough, deflected in off Joel Matip.

Those are the inches that Liverpool may be cursing tonight – that a deflection should put them at a disadvantage so early in the game – but breaks went their way too. The high line that Klopp courageously employs lives on the edge by definition. It was exposed on several occasions, failing to catch out Gabriel Jesus’ far-post run for City’s second, but it also caught out Raheem Sterling in what the Etihad thought was a potential winner.

That much-derived high line also provided the platform for the frantic pressing that upset the City’s rhythm over and over again. There were long spells were Liverpool felt like second-best, as though a gap between the two was finally being exposed, until they would hit a counter-punch that restored equilibrium. Sadio Mané’s equaliser, within 47 seconds of the restart, was one such moment.

Ultimately, and perhaps typically, they could not be separated. The result is that little has changed. One point still separates both sides at the top of the table, as it would if you went back almost a whole four years. The only material difference is that now Liverpool need a favour. They are lagging slightly behind. That’s the beauty of this rivalry made of the finest margins. It only takes one moment, between now and late May, to turn it all around.