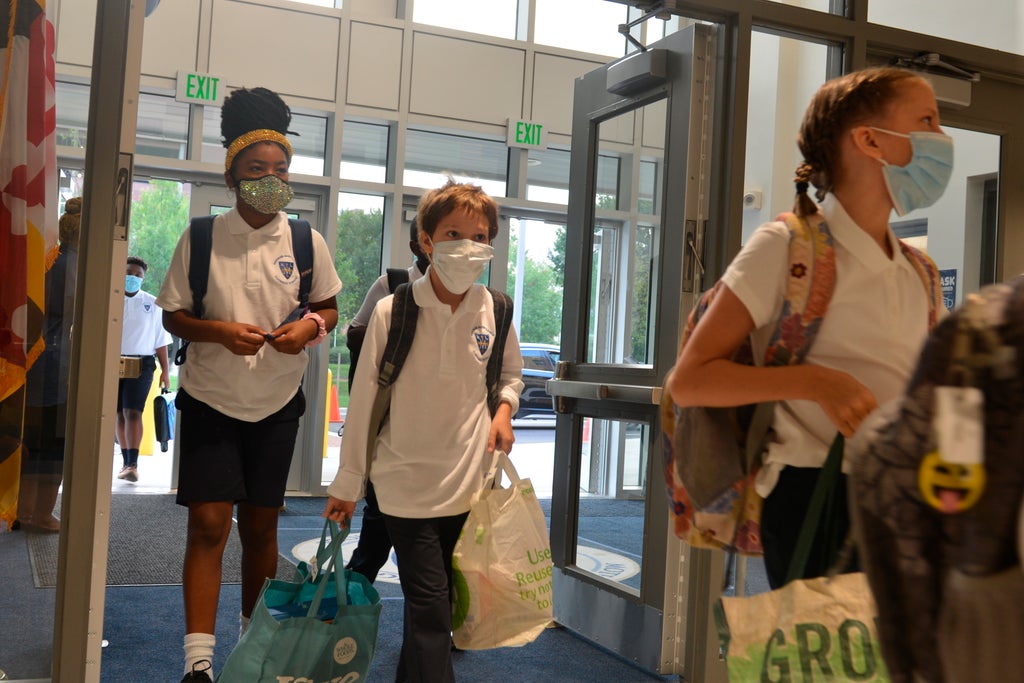 Enrollment in Catholic schools in the United States rose 3.8% from the previous academic year, rebounding from a sharp drop caused by the coronavirus pandemic, Catholic education officials reported Monday.

The National Catholic Educational Association said nationwide enrollment increased by 62,000 to about 1.68 million students, marking the first increase in two decades and the largest jump it has recorded in at least five decades.

“Enrollment at all types of schools — public, charter and private — were impacted last year due to the COVID-19 pandemic. Catholic schools had a decline in enrollment of 6.4% from 2019-2020 to 2020-2021,” the NCEA said about the largest single year decline in the 50 years since it has collected data.

“Catholic schools’ dedication in safely opening classrooms and supporting their communities’ needs last year is demonstrated in the 3.8% increase in enrollment.”

The annual report said that Catholic school students, teachers and administrators were optimistic when schools returned to in-person classes this fall as many did during the previous school year. But they continue to face challenges as school systems across the nation try to cope with the COVID-19 pandemic.

Financial and enrollment problems were worsened by the pandemic and forced the permanent closure of many Catholic schools nationwide. After a wave of closures, there are now 5,938 Catholic schools in the United States, compared with more than 11,000 in 1970.

The latest report said over the last two years, the largest dioceses have been losing enrollment at more than double the rate of other dioceses.

“As the population in the United States shifts away from major cities, the largest dioceses may face more school closures and consolidation,” the report said. “Dioceses will need to determine how they can continue to serve underserved communities in their cities as these changes occur.”

Elementary and middle schools were harder hit between the 2019-2020 and the 2020-2021 school year by the pandemic with a collective enrollment decline of 8.1%, compared with a 2.5% decline for secondary schools. Pre-kindergarten programs saw the steepest drop, 26.6%.

“Increases in enrollment at the primary grade levels is a positive sign for long-term secondary school viability, even if there was a slight decline this year,” the report said.

The report also said that pre-kindergarten enrollment increased by 33.5%.

“Enrollment of the youngest learners in Catholic schools was a driver of the overall Catholic elementary school increase. Almost every state had an increase in pre-kindergarten enrollment…” Top increases were recorded in Utah (137%, 284 students) and California (134%, 6,187 students).

The nationwide gain of 62,000 students to Catholic schools can be mostly attributed to pre-kindergarten related enrollment, the report said. But it is still 2.7% lower than 2019-2020.

“It is promising that early childhood students have returned to Catholic schools but troubling that enrollment is still lower than pre-pandemic levels,” it said.

“Catholic schools innovated throughout the last two years to meet the needs of their communities,” the report said. “They need to continue to adapt to those needs and use the momentum to retain students and recruit new students in the upcoming years to stabilize or continue to increase enrollment.”

Associated Press religion coverage receives support through the AP’s collaboration with The Conversation US, with funding from Lilly Endowment Inc. The AP is solely responsible for this content.