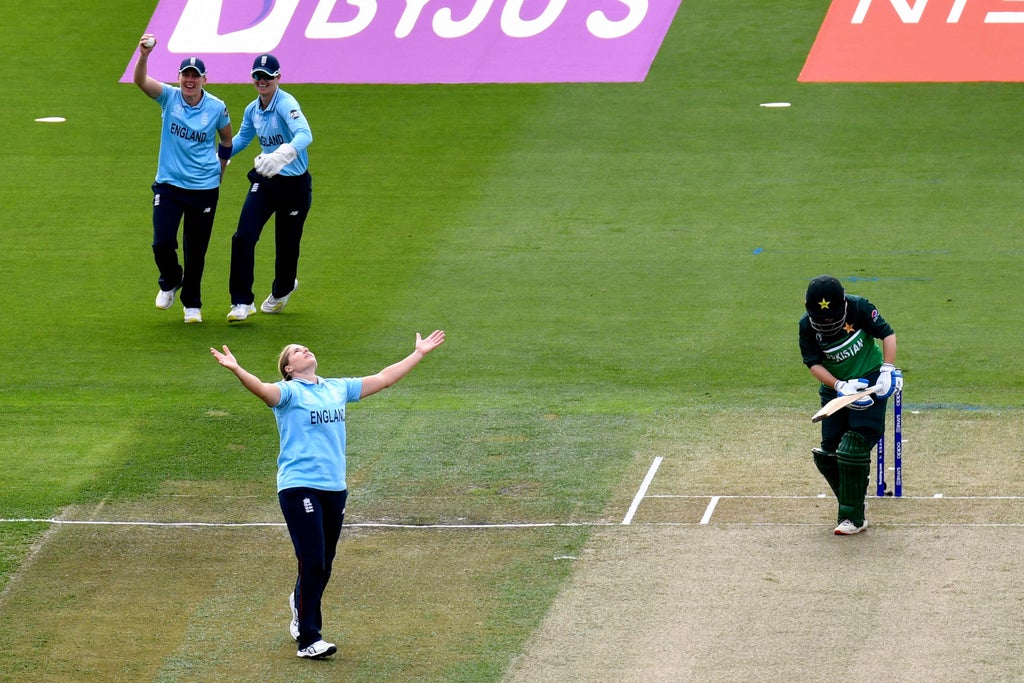 Katherine Brunt is hoping for no more gray hairs after England cruised to their first comfortable win of the ICC Women’s Cricket World Cup 2022 with a nine-wicket triumph over Pakistan in Christchurch.

Brunt was England’s star bowler – grabbing three for 17 – to finally kickstart her tournament as the defending champions bowled Pakistan out for 105.

The fast bowler was then able to put her feet up as Danni Wyatt combined with captain Heather Knight to knock off the runs in 19.2 overs, with Wyatt’s 76 not out earning her the Player of the Match award.

And Brunt, whose team now know a win over Bangladesh this weekend would secure their spot in the semi-finals, said: “During Covid times, we can’t go to the hairdressers to get our hair done and the gray hairs are emerging. We don’t wish to add to the gray hairs – so we would like some nice comfortable wins.

“Today was a special day and one we’ve been really aiming towards, getting a complete game in with bat, ball and in the field. We will definitely take a lot of confidence from this.

“We will keep trying to gain momentum and that’s what we’ve been trying to do the whole tournament – sometimes you are going to be on and sometimes you’re off. You do keep turning up and giving your best – we’ll take a lot of confidence for sure.”

After West Indies’ match against South Africa was abandoned in a wet Wellington earlier on Thursday, Knight’s team know victory over Bangladesh on Sunday will make certain of a top-four spot.

The holders have entered the qualification places in the table for the first time this tournament as they earned their third win in a row, narrowly sitting ahead of India on net run rate.

Wyatt got the job done with more than 30 overs to spare, leaving it relatively late but ensuring England got over the line within the required 19.3 overs to move just ahead of India in the table.

Brunt added: “We were aware of that. Obviously, the first goal is to win the game and you can’t worry too much about the outside stuff.

“Certainly, it is something you have got to go for, but you have to get that platform.” Diana [Baig] bowled brilliantly upfront – there has to be some level of respect and getting yourself in before you can blast off – like Dan [Wyatt] did – and she timed it perfectly.

“We were definitely aware of that, maybe not quite trying to do it to the T, but we were trying.”

Baig took one for 14 off six overs and didn’t just receive praise from one of the greatest seam bowlers in the world, but also her captain Bismah Maroof, who hailed her contribution after dismissing Tammy Beaumont to get England’s pursuit of the modest total off to a shaky start.

She said: “[Diana] was brilliant. She used the conditions really well – she has the talent and how she bowled in the right areas was good to see.

Pakistan will end their tournament in Christchurch against hosts New Zealand and Bismah, whose side have claimed one win from their six matches, added: “If we could have batted 50 overs and put on a score, I think the bowlers could have had a chance to defend it.”