England began their World Cup preparations with a 2-1 comeback victory over Switzerland at Wembley Stadium which extended their unbeaten run to a record 21 games.

Harry Kane moved level second with Sir Bobby Charlton in the all-time England scoring charts as he recorded his 49th international goal from the penalty to seal the Three Lions’ victory 12 minutes from time.

Luke Shaw’s fierce drive (45+1) had seen England recover from an underwhelming first-half display in which Breel Embolo headed the visitors in front (22) and Switzerland struck the woodwork on two occasions.

The victory extends England’s unbeaten run to a record-breaking 21 matches – the longest run in the national team’s history – laying the ideal foundations as Gareth Southgate’s side bid to go one step further in a major tournament at this year’s World Cup in Qatar.

Man of the Match: Conor Gallagher

Record-breaking England on the road to Qatar

Fears that John Stones’ injury in the warm-up and late withdrawal would unsettle England came to fruition as Southgate’s inexperienced team, which featured debutants Marc Guehi and Kyle Walker-Peters, creaked against a Switzerland side who sensed a first-ever victory at Wembley could be on the cards.

The lively Conor Gallagher saw a curled effort headed clear quarter of an hour in, but it was Swiss domination from there on, with Embolo glancing home Xherdan Shaqiri’s inch-perfect cross and receiving a questionable VAR reprieve for offside to give the visitors the lead. 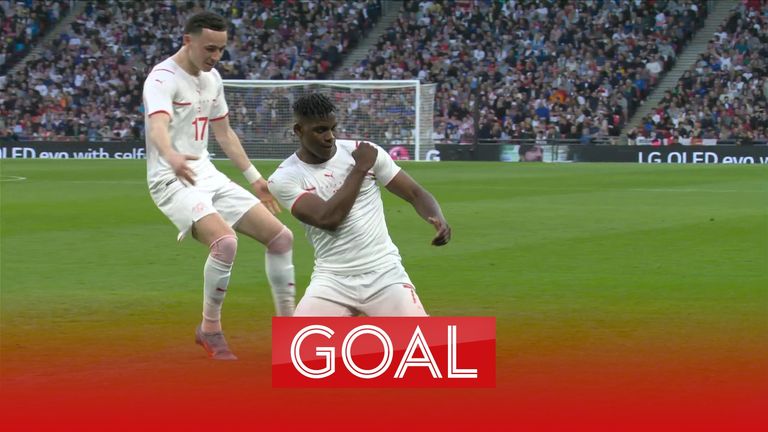 Switzerland’s Breel Embolo opens the scoring against England at Wembley.

England were indebted to Jordan Pickford not to go two goals down when he brilliantly tipped Fabian Frei’s thunderous effort onto the bar, before Walker-Peters’s blushes were spared by the offside flag when he cannoned a shot off the post when a debut goal was laid on a plate in front of the gaping Switzerland goal.

Having already hit the bar, the woodwork denied Switzerland for a second time when Shaqiri’s direct corner struck the base of the England post, and Pickford soon atoned for his momentary lapse with a fine save to deny Ricardo Rodriguez’s follow-up effort. 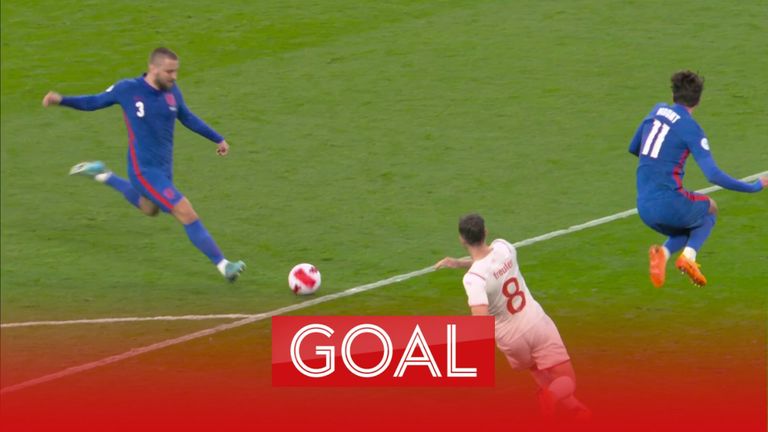 Switzerland will have been scratching their heads as to how they were not in a more commanding position at the break, let alone on level terms, as Shaw’s thumping left-footed drive papered over an underwhelming and disjointed first-half performance.

There was much-needed zip, precision and intensity to England’s play after the interval, which the impressive Gallagher’s looping pass releasing Kane through on goal where only a smothering save from Jonas Omlin preventing the England skipper from giving his side the lead.

Southgate introduced Jack Grealish, Declan Rice, Raheem Sterling and debutant Tyrick Mitchell on the hour. England continued to threaten the Swiss goal, with Kane heading into the gloves of Omlin and Ben White whistling a shot over, before Steven Zuber was penalized for handball after a VAR review and Kane was handed the chance to seal the victory from the penalty spot. 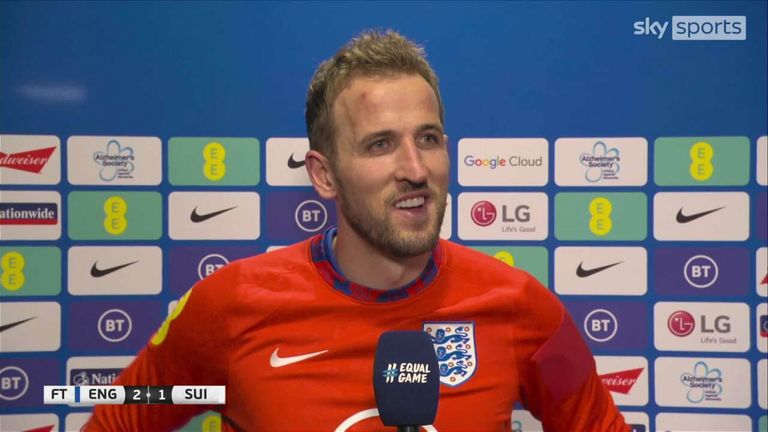 England captain Harry Kane: “You have to be ready for any chance at any moment. Penalties are a great way of getting on the scoresheet, I practice and work on them a lot. It is amazing company to be with, super proud to be doing that but we look forward to the next one. A big year ahead to get more caps and more goals. I will be ready for Tuesday but it is down to the manager.”

Southgate impressed by England in all areas

England manager Gareth Southgate: “It was a really good test; we know they are a very good side and a great challenge for us. We learned a lot about some new players and some inexperienced players in an international shirt.

“Everybody is always highlighting Jordan Pickford, but you saw in the first half the quality he has. He was composed with the ball today; he made good decisions and did not risk in silly areas.

“We played out form the back well, Ben White and Marc Guehi were very good. Ben got caught a bit for the goal but apart from that to come in at late notice with John Stones feeling something, he and Marc should be pleased.

“We know the Swiss tactically are good and we got stronger as the game went on. The subs made an impact and we felt it was right to manage the game that way. Declan Rice was excellent and made a big impact. Really pleased to win the game.”

England host Ivory Coast in an international friendly on Tuesday at 7.45pm.