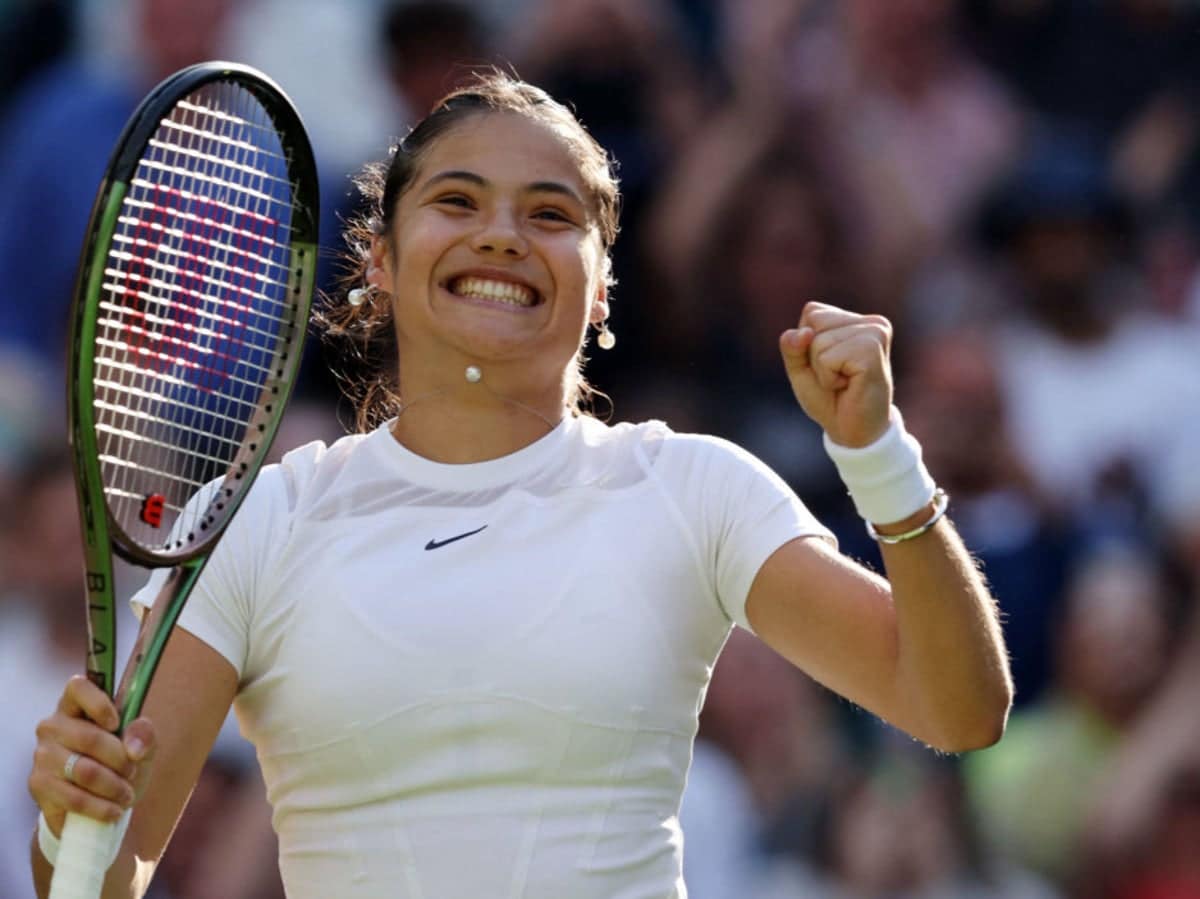 Homecomings are rarely supposed to amount to more than a procession but, nine months after her dizzying US Open triumph, Emma Raducanu required all her skill and tenacity to survive the gauntlet of her Wimbledon return. Be it the weight of expectation, angst over her fitness or simply the quality of her dangerous opponent, Alison Van Uytvanch, it was a sense of jeopardy rather than celebration that underlined the 19-year-old’s debut on Center Court.

A straight sets victory didn’t tell the story of an exhausting 100-minute examination that featured no shortage of drama as breaks were exchanged and momentum shifted as quickly as cheers could turn into gasps. Raducanu’s opening service game was a titanic saga in itself, but it was the Briton who drew first blood and, although she immediately surrendered that advantage, Raducanu rallied again to clinch a rollercoaster first set.

The second was more assured, with Raducanu able to impose herself more on points and make use of her wicked forehand as she slowly ground down Van Uytvanck’s resistance. A double-fault surrendered the break at 4-4 and Raducanu closed out a 6-4 6-4 win in style and to a standing ovation. Caroline Garcia, the world No 55, awaits in the second round.

“It’s an incredibly special feeling,” Raducanu said. “I felt the support as soon as I walked out of those doors. I want to say thank you to everyone for supporting me, through the tough times as well. It’s all worth it to play here on Center Court and come through with a win.”

Van Uytvanch might have been the villain of the piece, accosted by a partisan atmosphere, but the 28-year-old was the favorite and boasted a sharp edge in recent form. Despite only being ranked No 46 in the world, she had won 12 out of 13 matches on grass this season and her upset victory over then-defending champion Garbine Muguruza in 2018 was evidence enough that she wouldn’t shrink under an exacting spotlight.

It put Raducanu’s injury-plagued preparation in sharp relief. The storm has rarely ceased since her New York fairytale last September, hurtling through coaching set-ups and undulating in form, but a side-strain ground everything to a halt after just seven games in Nottingham at the start of this month. As late as Friday, Raducanu was forced to withdraw from a practice session and admitted there “definitely were moments when we weren’t sure” if she’d be able to play at all.

That the rain relented and the roof was opened was a welcome boost though, avoiding the claustrophobic atmosphere that forced Raducanu to retire with breathing difficulties during her stunning breakthrough last year. If any rust or pain was lingering, it failed to emerge in the opening game. Raducanu’s first point of her was met with a fist pump before a fierce return of serve invited another rapture of applause. Although two break points were spurned as Van Uytvanch fought back doggedly to hold, it felt as though any looming disaster had been warded off.

The burden of pressure returned in Raducanu’s opening service game, though, a twelve-minute struggle strewn with errors and punctuated only by brief flashes of brilliance. A double-fault brought on danger, a crosscourt forehand winner left Raducanu motionless on the baseline and she was forced to draw on all her resolve de ella to fend off three break points, a subtle backhand drop-volley the highlight of her defense.

Van Uytvanch is a cunning operator, employing an arsenal of stabbing slices that tested all of Raducanu’s agility, but her awkwardness was reinforced by a series of driving groundstrokes that wielded enough power to command rallies. The Belgian held serve to love in a flash and it was only after a quickfire service game of her own was sealed with an ace to make it 3-3 that, for the first time in the match, it felt as though the tide had turned in Raducanu’s favour.

The pair went toe-to-toe from behind the baseline on the opening point of Van Uytvanch’s serve, exchanging heavy groundstrokes, until a fizzing backhand skipped up off the line and settled the war of attrition. A crosscourt winner brought up break point and Van Uytvanch’s double-fault handed over first blood a little meekly.

The advantage won was relinquished all too easily as three unforced errors handed back the break in barely two minutes. If something has been missing in recent months, though, it was perhaps the sort of determined stubbornness Raducanu summoned here as she broke again to love, harnessing her aggression to her with better precision and forcing Van Uytvanch into a succession of errors. At 5-4, she faced two more break points but refused to buckle, fighting back to take the first set in 52 minutes as Center Court roared in approval.

Raducanu took that momentum into the second set, racing to two more break points, but the game soon descended into a marathon. Six break points went begging as fatigue set in and it was to Van Uytvanck’s credit that she somehow clung on to hold. The efforts of that assault threatened to have an adverse effect on Raducanu. Two errors put her under pressure at 2-1 and Van Uytvanck broke with a blistering forehand after yet another grievous rally. Again, though, Raducanu showed her resilience and will to respond, immediately breaking back to love as Van Uytvanck succumbed to a series of mistakes.

At 4-4, Raducanu earned the decisive break. Again, it was handed over by a double fault but it required more than just fortune as she scattered across the baseline, deflecting Van Uytvanck’s power and drawing the Belgian into mistakes. There was to be no final twist in the tale as she served out her victory to a rapturous reception. It was certainly no procession but it is hard to envisage a match that will stand her in such good stead.