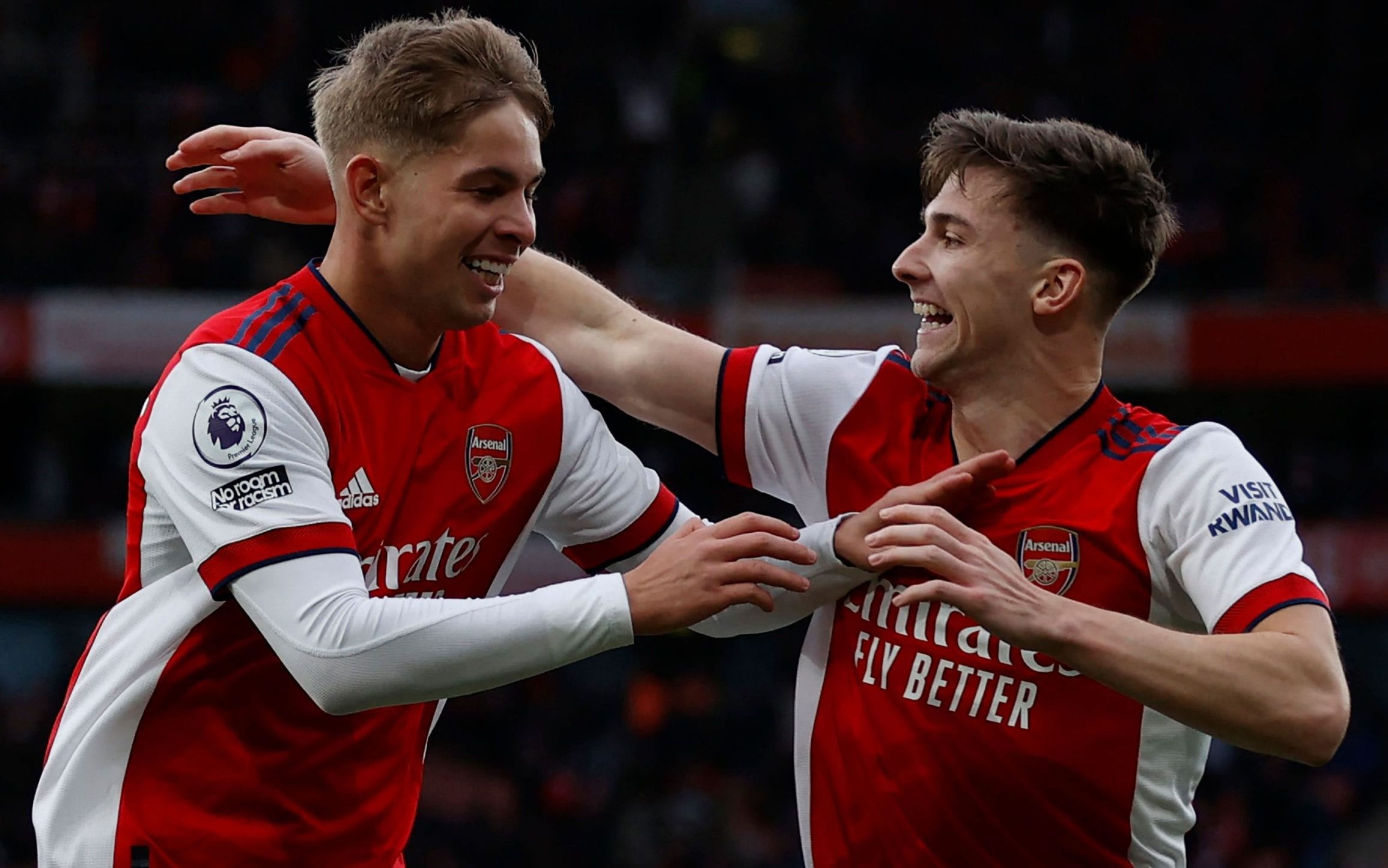 The Arsenal supporters do not have a song for Bukayo Saka. Nor do they have one for Emile Smith Rowe. Instead, they have one for them both. Saka and Smith Rowe, serenaded as one, considered by many as a dual threat, and so often seen as a pair rather than as individual players.

The reasons for this are obvious enough: both youngsters emerged as first-team stars at a similar time, and both are graduates from the Arsenal academy. In their lives as senior players, too, it is frequently Saka and Smith Rowe who make the difference together, almost arm in arm with each other, for Mikel Arteta’s side.

So it was once again at the Emirates Stadium, where Smith Rowe scored Arsenal’s first and Saka then added their second to ensure victory against a battling Brentford team. It was another game-changing performance by the great double-act of the Arsenal side, stepping up again when a moment of quality was required.

The race for the top four is not won on days like this, but it can be lost. Anything but another win would have represented a major blow for Arsenal, who are rebuilding their momentum after a difficult start to the calendar year. Saka and Smith Rowe’s goals took them level on points with West Ham United, but with three games in hand.

Is fourth-place Arsenal’s to lose? Perhaps it is a little too early to say, but they are certainly serious contenders for the Champions League places. Against Brentford here they played with a maturity and control that will serve them well in the coming months, even if a late goal by Christian Norgaard robbed them of a clean sheet.

For Brentford, still without the injured Ivan Toney, it was a day to scrap and hope for a break at the other end. The effort and determination was never in question for Thomas Frank’s side, but the quality in the final third was missing. They had no Saka and no Smith Rowe, and sometimes that makes all the difference on afternoons like these.

So much has changed in north London since Arsenal’s opening-day defeat by Brentford, back in August, and the evolution of Arteta’s team could be seen in the fact that only four players who started that game were also in the lineup here. It is essentially a different Arsenal team now, with far more cohesion in attack and solidity in defence.

Without Toney’s ability to hold onto the ball, it kept coming back towards Brentford’s goal in the first half. The away side could not escape, with the team falling deep towards their own penalty box as early as the first few minutes.

The challenge for Arsenal was therefore to navigate a way through, to spot a gap somewhere between the yellow shirts amassed in front of David Raya, the Brentford goalkeeper. The pressure was relentless in the first half, with Martin Odegaard pulling the strings for Arsenal and Saka causing problems, but Arteta’s side could not find that finishing touch.

It was often a decision-making issue for Arsenal, with their forwards choosing to pass when it was better to shoot, and then shooting when it was better to pass. They had the ball in the net when Alexandre Lacazette converted Granit Xhaka’s cross, but an offside flag came to Brentford’s rescue.

With Kristoffer Ajer, Ethan Pinnock and Pontus Jansson at the back, Brentford had plenty of bulk and bravery in their own box. They defended well, and reached half-time with the scores level, but it always felt like a matter of time before one of Arsenal’s attackers produced a moment of game-changing quality.

How sickening it must have been for Frank and his coaching team to see Arsenal score just minutes after the restart. It was almost as if Brentford got carried away, committing too many players forward in an attack, and they left space for Arsenal to exploit. Lacazette found Smith Rowe, who swerved inside Ajer and then bent his finish into the far corner.

From there Brentford had no choice but to be more adventurous. It proved their undoing, with Saka soon racing onto Thomas Partey’s pass and into the open space. Without hesitation, the 20-year-old slammed an excellent finish across Raya and into the same corner in which Smith Rowe had scored a few minutes earlier.

It is to Brentford’s credit that this team does not know when it is beaten, and their late push led to a consolation goal from a set-piece. Christian Norgaard seized on a loose ball, created some space for himself, and fired home from a few yards out. The goal flattered Frank’s side, overall, and there was no doubt that Arsenal served this latest Saka and Smith Rowe-inspired victory.