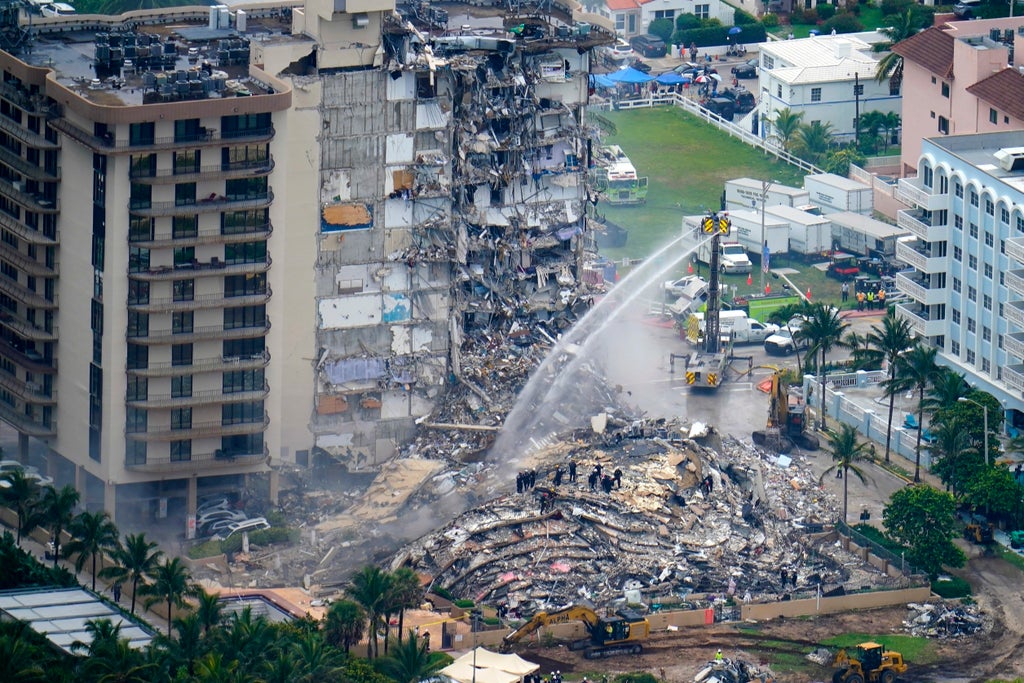 A tentative deal announced Friday would pay $83 million to people who suffered economic losses such as condominium units and personal property in the collapse of a Florida building that killed 98 people.

The emerging agreement, yet to be formally reduced to writing, would set aside whatever amount above the property settlement figure for those who lost loved ones in the collapse of the 12-story Champlain Towers South condominium in Surfside, Florida.

The proposal was unveiled at a hearing Friday before Miami-Dade Circuit Judge Michael Hanzman, who is presiding over lawsuits stemming from the June 24 collapse.

“That is promising news. We’ll see how it plays out,” said Hanzman, who must approve a deal and said he would hear any objections before deciding. “There’s a strong possibility we’re going to avoid any drawn-out legal battle.”

A written agreement will be ready to file in court by next Thursday, said attorneys involved in the negotiations overseen by mediator Bruce Greer.

The main lawsuit, filed on behalf of Champlain Towers South victims and family members, contends that work on the adjacent Eighty Seven Park tower damaged and destabilized a building in dire need of major structural repair.

Champlain Towers was in the midst of its 40-year structural review when it collapsed without warning, burying victims under tons of rubble and almost instantly destroying dozens of condo homes. That has triggered multiple federal and state investigations and a flurry of lawsuits by victims, families and condo owners.

A key question from the beginning was how to allocate money from the property’s sale, insurance proceeds and damages from lawsuits between wrongful death cases and those with only property claims.

Gonzalo Dorta, who represents the property owners group, said the agreement means those who accept part of the $83 million will be finished with the case and won’t be subjected to a possible assessment that state law allows for condo associations to cover legal and other costs.

“They will be free from that exposure,” Dorta said.

It wasn’t immediately clear how many people are in each camp. There were 136 units in Champlain Towers South and the 98 deaths. Some units were rented from out-of-town owners. Some owners are also part of the wrongful death aspect of the case.

“We believe this resolution takes into account interests for all sides,” said attorney Judd Rosen, who represents the wrongful death plaintiffs.

Still, this tentative agreement would represent only part of the case. The lawsuit claiming damages for wrongful death will move forward, with potential collections including $120 million or more from the property sale and perhaps $30 million in estimated insurance proceeds.

The lead investigating agency is the National Institute for Standards and Technology, which recently estimated its probe could take as long as two years.

Much of the recent work has involved preparing the beachside site to collect evidence through soil borings and other methods about what caused the collapse. There is also a Feb. 21 walk-through planned for experts to examine evidence stored in warehouses.