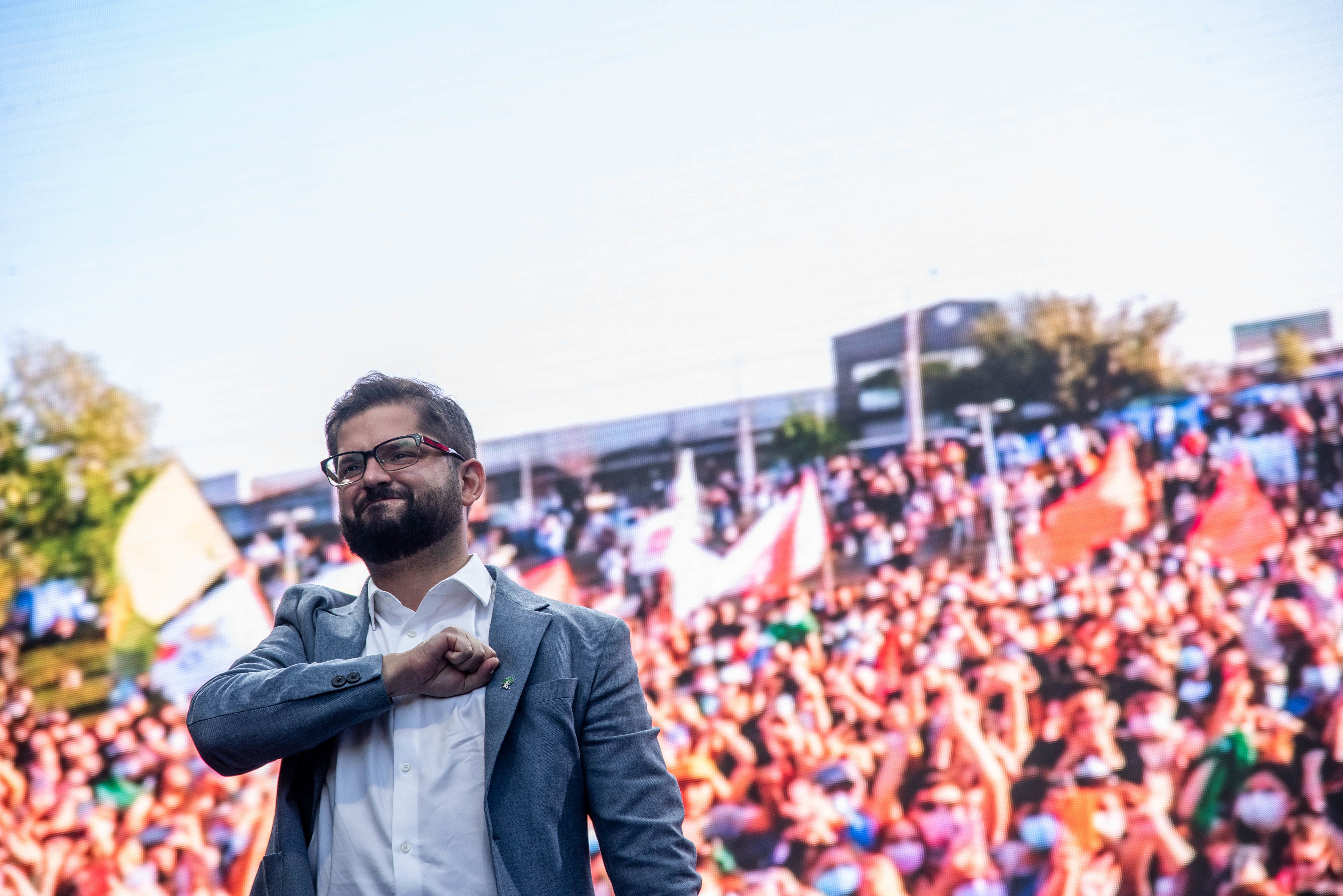 Chile embraces a new left in power. Gabriel Boric has won the second round of the elections with 55.73% of the votes, compared to 44.2% for the far-right candidate José Antonio Kast, with more than 92% counted. The triumph of Gabriel Boric, 35, opens the doors of La Moneda to a very young generation, forged in the heat of the social demands of the revolts of 2011 and 2019. And the first launched into politics already in democracy. Boric was four years old when the dictator Augusto Pinochet handed power over to a civilian government. And so it looks ahead, without the military burden. It is the generation that grew up “without fear,” and broke with the traditional center-left that between 1990 and 2010 led the democratic transition under the umbrella of the Concertación. Chile has also turned its back on the memory of the dictatorship, on the discourse of order and security defended by its rival, the extreme right-wing José Antonio Kast, to look towards a future that now opens up full of unknowns, with unpaid debts and many promises to keep.

Boric won the elections leading an alliance with the Communist Party. The official count gives him 55.1% of the votes, against 44.8% for Kast, who did not wait for the end of the count to congratulate Boric on his victory. Boric will be sworn in as the new president of Chile on March 11. That day, already 36 years old, he will become the youngest to wear the band in the history of the country.

The new president was second in the first round on November 21. Nobody really believed that he could turn around the result in the tiebreaker – there is no history in Chile of such a thing – but his strategy was a path to success. Boric reached out to the Concertación, Democracia Cristiana, and Socialist Party parties, and won the support of the founding fathers. It was the gesture he needed to add the votes of the center, what had escaped him because of his alliance with the Communist Party. It swept through poor neighborhoods, among women, and among voters under the age of 30.

See also  'Chaos, phenomenal waste' and pointless quizzes about the Spice Girls: Inside the final days of Test and Trace

Boric has won the elections with promises of profound, structural changes. His proposals are the same as those of the raised street, the one that recognizes the growth of the Chilean economy, the precipitous fall in poverty and the unusual increase in consumption during the transition. Young Chileans know that they are richer and, of course, infinitely freer than their parents, who lived under the dictatorship. But they have grown tired of the inheritance of that neoliberal experiment, which left the administration of public services to companies – in the Chilean Constitution, approved in 1980, water is a private right – and ended up forging an unequal society of families. indebted and with a minimal and absent State. The new generations want to receive the benefits of the “Chilean miracle”, a country with stability and indicators that are the envy of its neighbors.

Boric voted very early in the morning in Punta Arenas, in the extreme south of Chile, at the foot of the Strait of Magellan. “I entered politics with clean hands, with a warm heart, but with a cool head,” he said after depositing the ballot in the ballot box. Then he traveled to Santiago de Chile, where he waited for the results. At the same time Kast voted, but in Paine, a small town south of the capital, where his family, German immigrants, made a small fortune. Kast’s speech of order and progress found its way into the first round among a middle and lower-middle class fed up with the lags in the violence of 2019, but lost steam in the tiebreaker this Sunday. The candidate always offered a promise of the past, far from the future that Boric promised, and could never completely detach himself from his ties with the Pinochet dictatorship. Kast campaigned in 1988 for the continuation of the dictator in the plebiscite.

See also  Restaurant: Since 1911, the sea with bites in Madrid | The traveler

One of the first challenges for the Chilean president-elect will be to try to clear up economic uncertainty and calm the markets, whose reactions in Chile are sensitive to political ups and downs. Therefore, it is not ruled out that Boric may soon appoint who will lead the Ministry of Finance. Although it is not a tradition in Chile, where the cabinets are appointed by the president-elect in January, it has been a polarized presidential election in which the candidates in the second round had to make sharp turns to the moderate sectors. And especially in the case of Boric – where at this stage experts from the Broad Front have coexisted with those from the center-left, with different views on important issues – naming the head of the fiscal coffers will be a first great sign about the tint that his will have. Four-year administration.

As it has had to limit its tax collection ambitions -five points of GDP between 2022 and 2026-, Boric will also have to deal with the high citizen expectations that have been generated from its leadership, in matters that are especially sensitive for the people, such as the cancellation of bank debts incurred by higher education. The same about his proposals regarding pensions: although he had been open to reassessing it, at the end of the campaign he again spoke of the end of the Pension Fund Administrators (AFP).

The appointments of the Ministry of the Interior and Foreign Affairs are also awaited with special interest. The first because of its role in public order – the Broad Front and the Communist Party have had a certain weakness in condemning the violence during the 2019 riots – and the second because of the incidents related to regimes such as Nicaragua, where the structure of communism Chilean has important ties. In any case, the general secretary of the PC, Guillermo Teillier, has assured that the president will carry out foreign relations and that his party will abide by them.

With the victory of the left in the Government, another of the issues to which Boric will have to put his political talent at stake will be the fate of the constitutional convention, which is working until July on a new text that must be approved in a plebiscite. The victory at the polls this Sunday could tempt the convention to seek more profound changes, given the vast majority of the left in the 155-member body. The victory of the left in Chile, however, is still limited by the tie that will remain in the Senate with the right from March and in a Chamber of Deputies where it will be difficult to build majorities.

The successive hours will be crucial for Boric in his attempt to expand his coalition, outside the margins of the Broad Front and the PC. The signals to the socialist world will have special relevance, which turned to the campaign of the deputy. Although some leaders resist any type of government integration, another sector is willing to join, as Boric has shown on different occasions. It will be, incidentally, the definitive rupture of the alliance between the Socialist Party and the Christian Democrats, which announced that it will be in the opposition.

But perhaps the biggest challenge for the president-elect will be to rebuild Chile’s political and social climate, highly polarized after this presidential campaign where the most leftist since Salvador Allende and the most rightist since Augusto Pinochet faced off.

Subscribe here to the EL PAÍS América newsletter and receive all the information keys on the region’s current affairs.